Is This a Picture of a Male-Only Refugee Caravan Heading for U.S. Border?

The United States is not the only part of the world dealing with an influx of refugees. 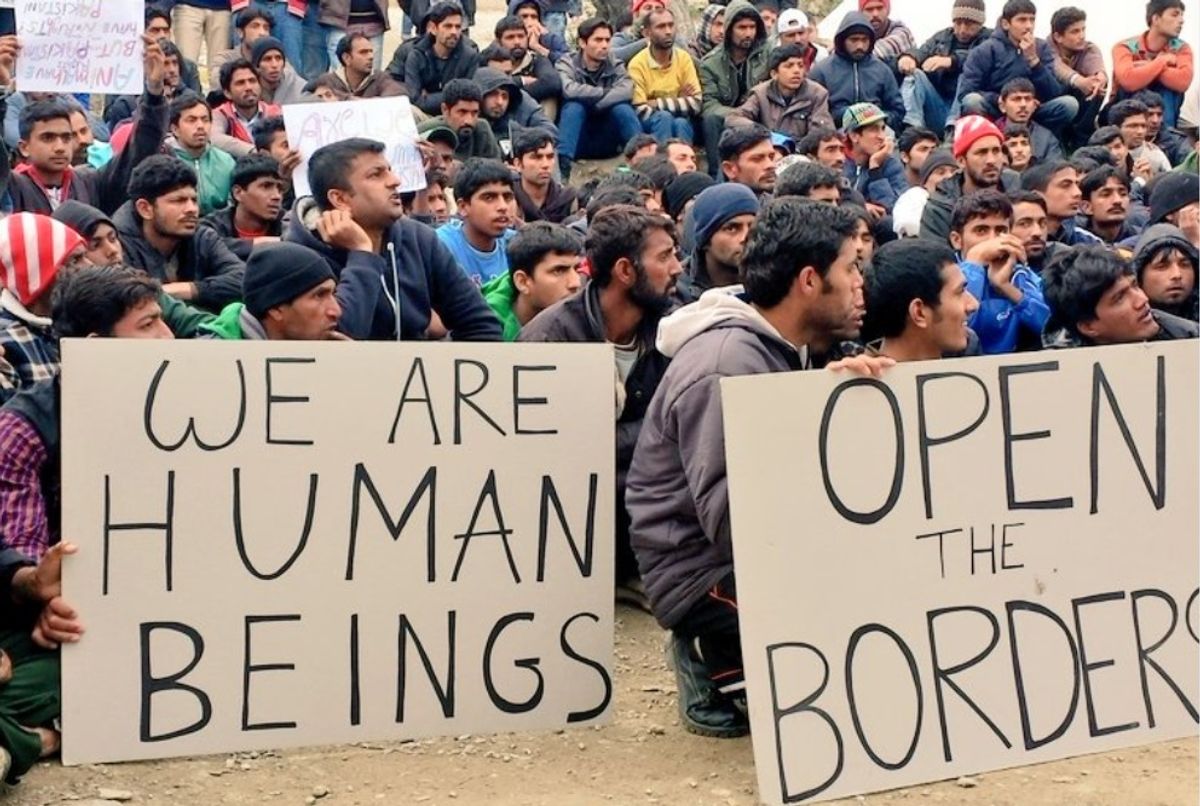 Claim:
A photograph shows a male-only refugee caravan approaching the border between the United States and Mexico.
Rating:

An image supposedly showing members of a male-only refugee caravan holding signs reading "We Are Human" and "Open the Borders" as they approached the frontier between Mexico and the U.S. is frequently shared online by social media users supporting President Donald Trump's call to construct a border wall: There are 3 more caravans heading north towards our US southern border. Call, email, and visit all your state representatives. Tell them we demand a border wall or we want their resignations. #MAGA

This photograph was not recent in February 2019, nor does it depict a caravan of refugees heading for the U.S. border.

This photograph was actually taken in March 2016 at a refugee camp in Greece, and according to photographer Luigi Scuotto, the picture captured a protest by a group of Pakistani refugees who had made their way to Lesbos island:

Contemporaneous news reports noted that many of these Pakistani migrants were stranded at the Greek camp and that many faced deportation under a new deal between Turkey and the European Union:

The volunteer-run "Better Days for Moria" camp has hosted thousands of migrants arriving on Greece's Lesbos island, but its days appear to be numbered.

A new deal between Europe and Turkey means that all new arrivals will be detained in a secure facility next door.

The last remaining residents are mainly Pakistanis who do not normally qualify for asylum.

“We hope, we wish that the Greece government gives us asylum, that we can stay legally, because we don’t want to stay in an illegal way,” said Pakistani migrant Tavakal Hussain, 36. “So we hope that, we wish, we want the Greece government to feel mercy and sorry for us, because we put our lives in risk in the sea. We don’t want to go back to Turkey. We love to stay in Greece.”

Such pleas for mercy are unlikely to be enough. One hundred fifty Pakistani and Bangladeshi migrants were taken by ferry from Lesbos to the Greek mainland under police escort to have their applications processed.

Among the migrants, there is much fear about what lies ahead.

Another photograph of these refugees distributed by Getty Images was captioned as follows: "Pakistani migrants protest outside the Moria hot spot at the island of Lesbos against the expulsion of 50 Pakistanis back to Turkey on March 16, 2016. European leaders scrambled Wednesday to salvage an under-fire deal with Turkey to ease the migrant crisis with a round of shuttle diplomacy on the eve of a crunch summit."

A video report from VOA News added more context to the refugee crisis in Greece:

The rhetorical question "See any women or children here?" was also emblazoned on the bottom of this viral image. While this photograph may appear to show a group consisting mostly of men, Scuotto, the photographer who captured the picture, has shared several other photographs showing women and children were indeed present at the Moria refugee camp:

According to a fact sheet from the United Nations Refugee Agency published in November 2015, "family tents" had been set up at the refugee camp in Moria, and the staff were working to set up separate reception areas for women and unaccompanied children. This may explain why the viral photograph featured mainly men.