Is This Red Owl With Blue Eyes Real?

A photograph purportedly showing a rare red owl with blue eyes is just the latest in digital owl image fakery. 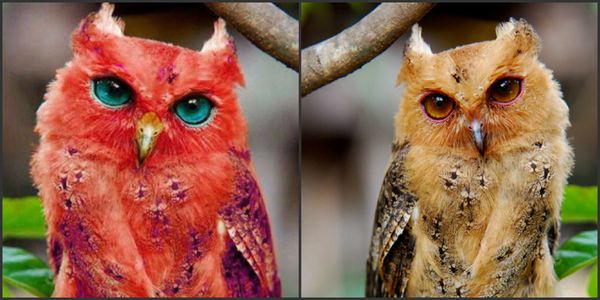 In 2015, the below-displayed image surfaced online, along with the question of whether such a creature truly existed. "There was a picture of a red owl on [Facebook] with blue eyes," someone asked Snopes. "[Do] they exist?" No, the image — which is sometimes shared with the claim that it depicts an owl native to New Guinea — was digitally edited. We added it to our archive of other fake owl images, including pictures that supposedly depict a teal owl, a rainbow owl, and two strange-looking owlets.

While the above-displayed image has been circulating online since at least May 2015, it didn't go viral until it was shared by a Facebook page called "3dfirstaid" on Oct. 1, 2015.

Regardless of when and where this image originated, it has clearly been digitally manipulated to change the owl's coloring. According to Owl Pages, the original picture was taken by photographer Brian Santos and shows a Whitehead's scops owl from the Philippines: This article was updated and edited to meet Snopes' current formatting standards.