Did the Red Cross Serve This Meal to Hurricane Victims?

A photograph purportedly showing a meal served by the Red Cross to victims of Hurricane Harvey in Texas was actually a picture of a school lunch from 2014. 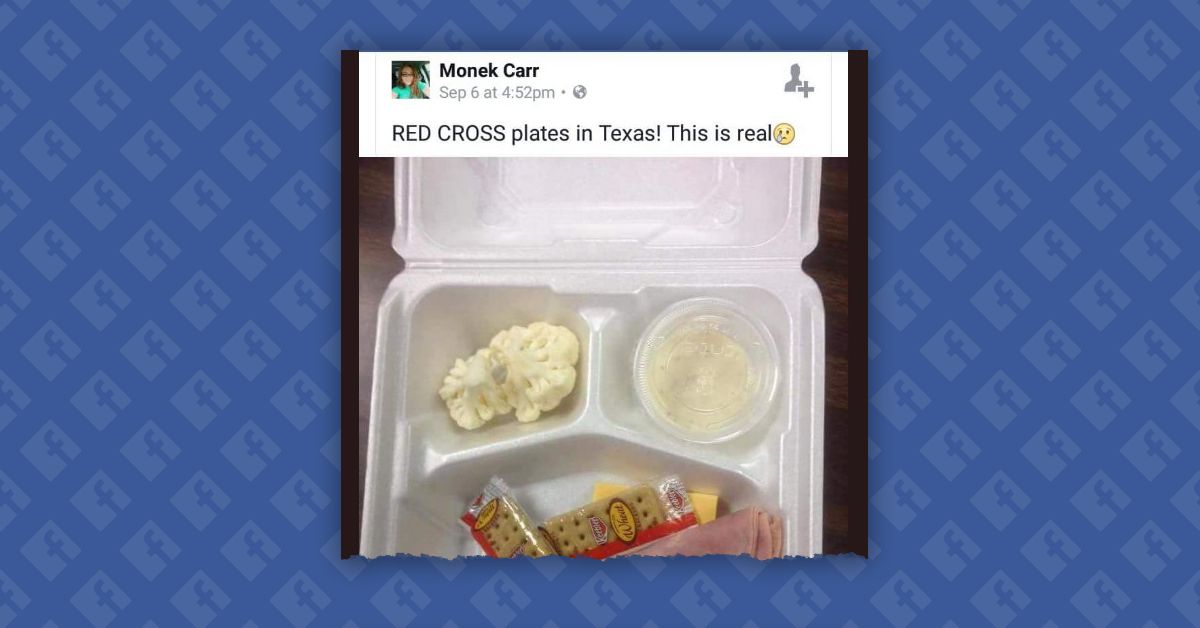 Claim:
A photograph shows a meal served by the Red Cross to victims of a hurricane in Texas.
Rating:

A host of rumors concerning the American Red Cross and their disaster relief efforts cropped up in September 2017 after a string of hurricanes battered the United States. Among them was a photograph that purportedly showed a meal served by the nonprofit organization in Texas after Hurricane Harvey: The pictured meal, consisting of some slices of ham and cheese, crackers, and cauliflower, actually shows a school lunch that was served to a student in Chickasha, Oklahoma, in 2014:

Angry parents in Chickasha complain their kids aren't getting enough to eat at school. The Holton family says the meal the district calls a "Munchable" is ridiculous and family members say it needs to change.

The meal that daughter Kaytlin Shelton took a photo of consists of lunch meat, a couple crackers, a slice of cheese and two pieces of cauliflower. Schools in Chickasha serve it every other week.

Kelly Tyco, a reporter for the newspaper TC Palm, posted a picture of a real meal served by the Red Cross at a shelter at Hidden Oaks Middle School in Florida after Hurricane Irma. That meal included a hamburger, french fries, and fresh fruit and vegetables:

A controversy over portion sizes did arise in September 2016 when the Red Cross provided meals to victims of severe flooding in Louisiana and some meal recipients posted photographs apparently showing disturbingly meager offerings: However, the scanty portions were not representative of all Red Cross meals served during that disaster, as we reported at the time

The Red Cross acknowledged that some food boxes went out with ridiculously small portions: the result of an error, [Red Cross spokesman Jay] Bonafede said, which was subsequently corrected. The user who posted the chicken nuggets and peas photograph said he received an apology from the organization.

The Red Cross was also subjected to rumors holding that they were charging victims for their services (false), that they refused to serve hamburgers (mixture), and that they threw away hundreds of pounds of donations (unproven). In response, the nonprofit published a post on Facebook about the dangers of rumors and misinformation: