Did the Red Cross Prevent 400 Hamburgers from Getting to Harvey Victims? 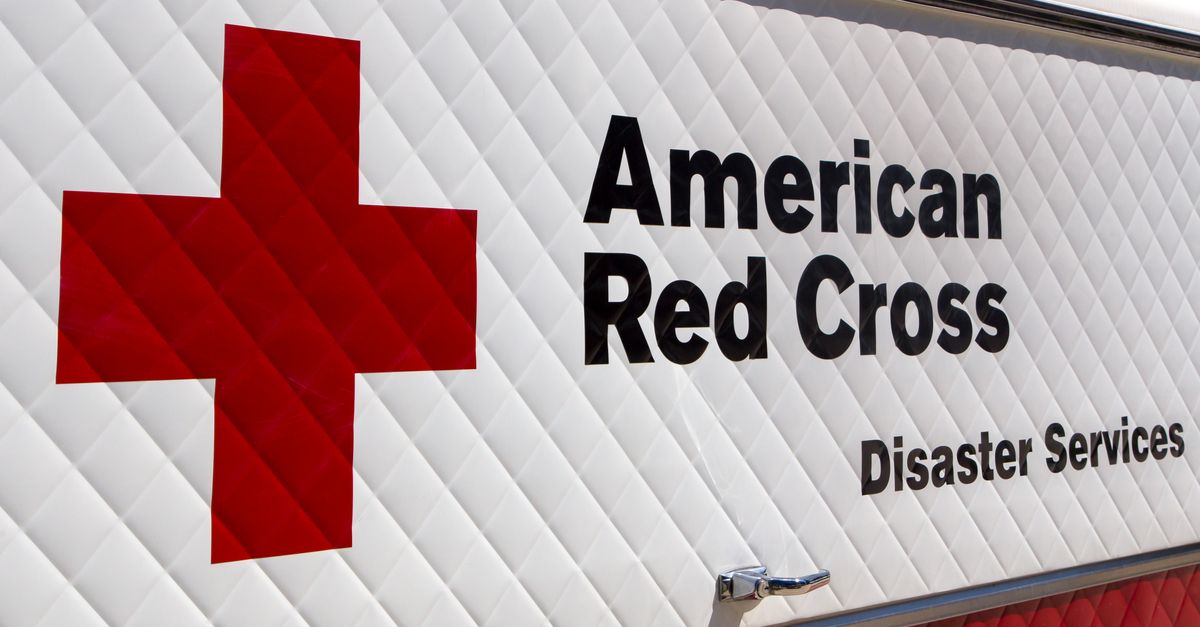 Claim:
The Red Cross blocked the distribution of 400 hamburgers to Harvey evacuees in Texas.
Rating:

Some sort of disagreement occurred between Red Cross volunteers and local samaritans over serving hamburgers to victims of Hurricane Harvey.

When the incident occurred and why; the nature of the dispute; whether the reasoning was fully explained to the good samaritans trying to distribute hamburgers.

On 4 September 2017, we received a number of e-mails asking whether it was true the Red Cross prevented a woman named Lindsey Scott from distributing 400 hamburgers to evacuees of Hurricane Harvey in Texas.

The emails referred to a series of articles that made the claim, with their sole source being a 2 September 2017 Facebook post that appeared on Jamie Mitchell Matuska's page. The message was long, and read in its entirety:

My sister says I can use her FB page to get something off my chest if I identify myself lol. This is Lindsey Scott, and I'm astonished at the behavior of the Red Cross husband/wife team at the mid-county Jack Brooks airport yesterday. Who together accosted me and took turns berating me because I was trying to bring 400 warm hamburgers to our hungry evacuees, who according to them did not need the food because they had "already had a sandwhich." Yes, they had 1 sandwhich in 24 hours. They were desperate for a hot meal! The Red Cross proceeded to try and load the warm, ready to eat burgers into an ice chest. The pilot, who had donated his time, fuel, money, plane and arranged the delivery of the burgers was horrified at not being able to serve them (he actually came to volunteer as well). I confess I just stood there with my mouth gaping open, fighting back tears while they told me that I did not know what I was doing and they had not even seen me volunteering. This is not a normal reaction for me but either exhaustion or pregnancy hormones got the best of me because I simply couldn't find the words to fight back...

The Red Cross was not there at 6:30 am when we got there to find we had no food to serve the 100s of evacuees who had sat on a bus all night and some who had not eaten in 24 hours. They were not there when the sun came up and they woke up hungry, angry, tired, scared, and frustrated. They did not see them fighting over donuts that OUR friends and family answered the call to bring at 7:00 am. They did not see the tears over dehydrated babies while we worked to arrange the delivery of pedialite and formula. They showed up HOURS later....when we had already coordinated the delivery of food and supplies with our LOCAL community members (who came out in droves) and The Sky Hope Network through our wonderful State Representative Dade Phelan after just a single phone call. And the reason they didn't see me (sweating and sunburned) is because I spent most of the day on the aviation side of the airport on the tarmac coordinating the landing, unloading, and transport of supplies the Sky Hope Network was flying in all day. (which was no easy feat considering the insane, chaotic state of the Jerry Ware terminal). I do not care they weren't there (I understand the vast, severe, damage that ranges from Corpus, Rockport, Houston all the way to Louisiana). I do, however, care how they treated the people of our community when they arrived!

These supplies/donations were made by OUR LOCAL community members and the Sky Hope Network (not the Red Cross) and the Red Cross wanted them all shipped to their warehouse for processing and distribution. Apparently they don't do "local distribution." Say what?! We need these things here, locally, NOW. And while we refused to turn away anyone who came on foot or by other means (evacuee or not) or any other church, group, or organization asking for supplies...the Red Cross tried to prevent us from sharing OUR donations (contributed by our community for our community and surrounding areas). The kids that are barefoot need shoes NOW, not two weeks from now...and we had more than enough to share.
And the way, these two representatives of Red Cross treated local people who were donating their time (many in the wake of having lost everything of their own) and spending countless hours away from their kids and families in the wake of such tragedy hurts my heart. I pray this is not representative of the Red Cross organization as a whole. People who donate their money would be horrified. I'm thankful for our local volunteers who continued to fight with them (when I could not) and saw that the burgers and supplies were distributed to ALL those that needed them. As, OUR motto was, we turn no one away.

One thing I learned from this is THANK GOD I'm from TEXAS. Our men may spit, smoke, dip, cuss, and drink from time to time...but when the shit hits the fan, our husbands, brothers, dads, uncles, cousins, sons, and all the other men we know put on their boots, waders and get their boats and trucks and go to work! They aren't afraid to get dirty or work long hours in the dark. They aren't afraid of a little water, or snakes, or dogs that aren't kenneled. They are strong enough to carry you out of your home and they can deal with being hungry, wet, cold, and tired (they deal with this sitting in deer and duck blinds half the year). They have the know how to save your animals (horses, cows, etc) and they WON'T QUIT until the work is done. And our community will answer the call to donate, collect and distribute supplies and food wherever it's needed. I won't be waiting on the Red Cross.

Predictably, the claim stirred up anger and rants on social media:

PLEASE DO NOT DONATED TO THE RED CROSS!! GIVE TO THE SSLVATION ARMY!! RED CROSS REFUSED TO GIVE DONATED HOT HAMBURGERS TO TEXANS!!

The post was vague about what exactly transpired when the writer purportedly landed along with a pilot and 400 hamburgers, presumably at Jack Brooks airport in Beaumont. The post also does not mention exactly when the incident occurred or why they were unable to distribute the food. Blogs and web sites repeated the claim, but only one (IJR) indicated that they had contacted the Red Cross (unsuccessfully) for further information.

We contacted the Red Cross for comment and their National Spokesperson, Jenelle Eli, sent us a statement indicating that the incident did indeed occur but that the volunteers who initially refused to serve the burgers acted based on their training around food safety. The Red Cross claimed that the burgers were eventually served:

The safety of the people we serve is our first and utmost priority. Our volunteers and workers on the ground may not be perfect, but they are all working with the best of intentions and to the best of their ability.

Please know that if a volunteer or volunteers steps in to a situation, they are not trying to overshadow the generosity or compassion of spontaneous assistance being offered but doing so based on training and past experience with that goal--the evacuees safety--in mind not with an intention to “take charge” or in any way diminish those kind efforts.

With donations like food especially, we have policies and procedures in place solely to protect the health of those who may already be in a weakened or vulnerable health state. Since the Red Cross cannot ensure the safety of food prepared in a non-commercial setting, we do not typically accept home-cooked food as donations. Even properly prepared food, if not clearly monitored, can quickly go bad through no fault of those who prepared or are serving it--which could make a bad situation worse.

With all that in mind, we have spoken with the Deputy Director and volunteers on the scene. Again, while the volunteers may have appeared overzealous, they intervened out of a desire to protect impacted by Harvey, with their health and well-being in mind. Eventually, our volunteers assisted in handing out the burgers to people impacted by Harvey. These are extremely challenging and often life threatening situations--everybody is trying to meet all needs, while being cut off from the floods. We greatly appreciate not just our volunteers but ALL volunteers and the generous support of the public. We are constantly reviewing our policies and procedures, learning to adapt--because each disaster is different--and learning from experiences. It is our hope you’ll understand that we’re all trying to do the right thing. Thank you for your patience and understanding.

It remains unclear whether the volunteers fully explained their motivations to Scott, whether they failed to cite food safety concerns out of fear of insulting her, or the manner by which they "accosted" and "berated" her.

We received a response from a forthcoming Matuska later that day, along with contact information for several witnesses to the incident. In reference to questions we posed to Scott, Matuska sent the following reply:

[P]er Lindsey: No one [from the Red Cross] said anything about a safety concern. The Red Cross's position was that [evacuees] had already eaten a sandwich ... Lindsey tried to explain she believed at least two buses had not gotten one [because] we ran out [of food]. [Red Cross workers] didn't [appear] to be concerned about safety [because] they [placed the hamburgers] into an ice chest to save for later. There were problems the entire time they were there with them not wanting volunteers to distribute things.

My understanding is that the food was eventually handed out per the volunteers[.]

She explained that she believed the hamburgers were eventually distributed to evacuees after they were placed into "ice chests." A subsequent message from Scott via Matuska in response to the provided Red Cross statement added that "obviously [she] didn't cook [the] burgers [herself]," indicating they were not "home-cooked food" donations.