Is This a Real Video of an Arrow That Always Points to the Right?

No computer-aided manipulation was used to create this video of an arrow that always points right, even when you spin it 180 degrees. 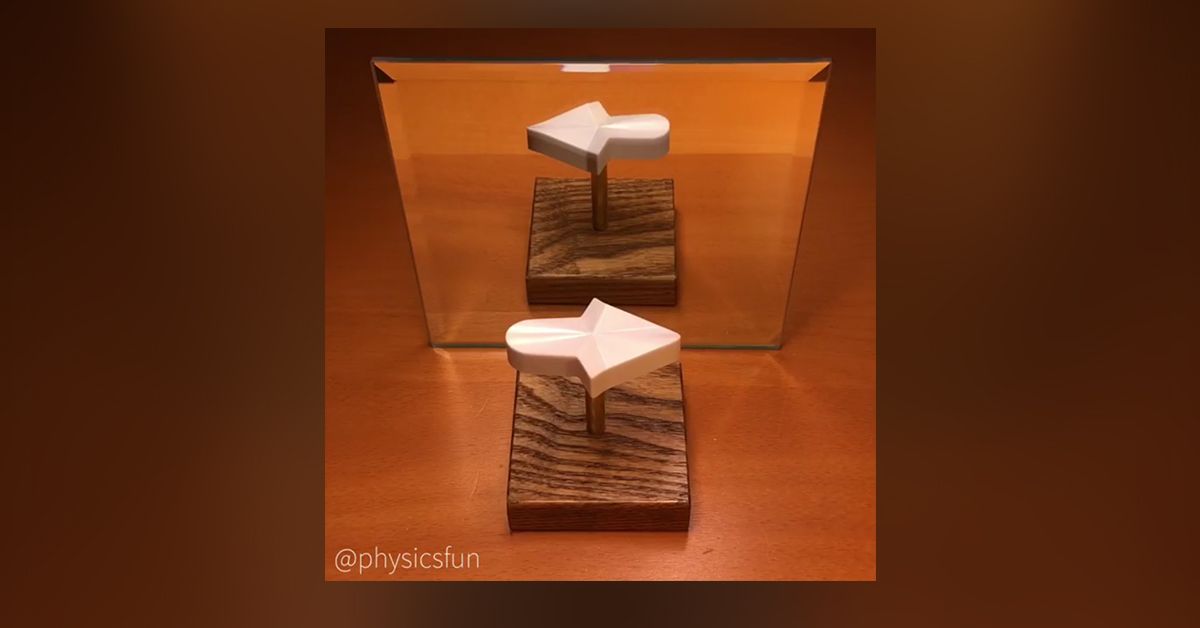 Claim:
An optical illusion allows a 3D arrow to appear as if it is always pointing in the same direction (with its mirror reflection showing the opposite direction), even when it is rotated 180 degrees.
Rating:

On 30 April 2018, the Instagram account "physicsfun" posted a video of an optical illusion involving what appears to be an arrow that points to the right — even when you turn it 180 degrees and even when its reflection points in the opposite direction:

Right Pointing Arrow: spin this arrow 180 degrees and it still points to the right- only in a mirror will it point left (and only to the left). Another incredible ambiguous object illusion by mathematician Kokichi Sugihara of Meiji University in Japan, the inventor of this illusion and art form. A clever combination of reflection, perspective, and viewing angle produce this striking illusion. ➡️ Follow the link in my profile for info about where to get this illusion arrow and other amazing items featured here on @physicsfun #illusion #ambiguouscylinderillusion #ambiguouscylinder #geometry #mirrorreflection #physics #ambiguousobject #kokichisugihara #physicstoy #math #mathtoy #mathstoy #optics #opticalillusion #3dprinting #perspective #science #scienceisawesome

A number of readers have inquired about the nature of the illusion, wondering if possibly it was caused not by clever trickery, but by brute CGI. In fact, the video is real, and it is an especially impressive demonstration of what its creator has dubbed "anomalous mirror symmetry," and which is related to the ambiguous cylinder illusion.

The illusion was invented by Kokichi Sugihara, a mathematician at the Meiji Institute for the Advanced Study of Mathematical Sciences in Tokyo, Japan. He wrote a 2016 paper for the journal Symmetry that explained the deception, which aims to create illusions that appear to break the laws of optical physics by forcing mirrors to reflect what appears to be the opposite of what would normally be reflected

However, we show that anomalous symmetry can be generated if we employ [the] ambiguous cylinder illusion. We characterize the class of cylinders whose mirror images generate anomalous symmetry and moreover the same anomaly is preserved even if the objects are rotated around a vertical axis.

The process of making a physical object that appears different at certain viewing angles is complex, involves heavy math, and usually a 3D printer. To get a sense of that process, the paper shows a model of the same basic arrow at three points of rotation:

The interplay between what our eyes perceive at this angle and the physical reality of what is actually present stems, generally speaking, from manipulating our eyes to read curved lines as straight ones by capitalizing on our brain’s poor ability to register depth. This is further aided by lighting designed to obscure specific shadows and surface features. To get a basic sense of what Sugihari is selling as an arrow, it helps to look at what the “arrow” would look like from a bird’s eye view:

Sugihara has also demonstrated that a variety of other shapes can be designed to achieve this kind of “anomalous symmetry”. Here, for example, is a fish that is bravely appearing to break some optical physics laws: Because researchers have made these objects a reality and published their methods in peer-review papers, we rank the authenticity of this video as true.