Is This a Real Photograph of G7 Leaders?

A German photographer covering the G7 summit captured an image of U.S. President Trump seemingly taking a posture of opposition to other world leaders. 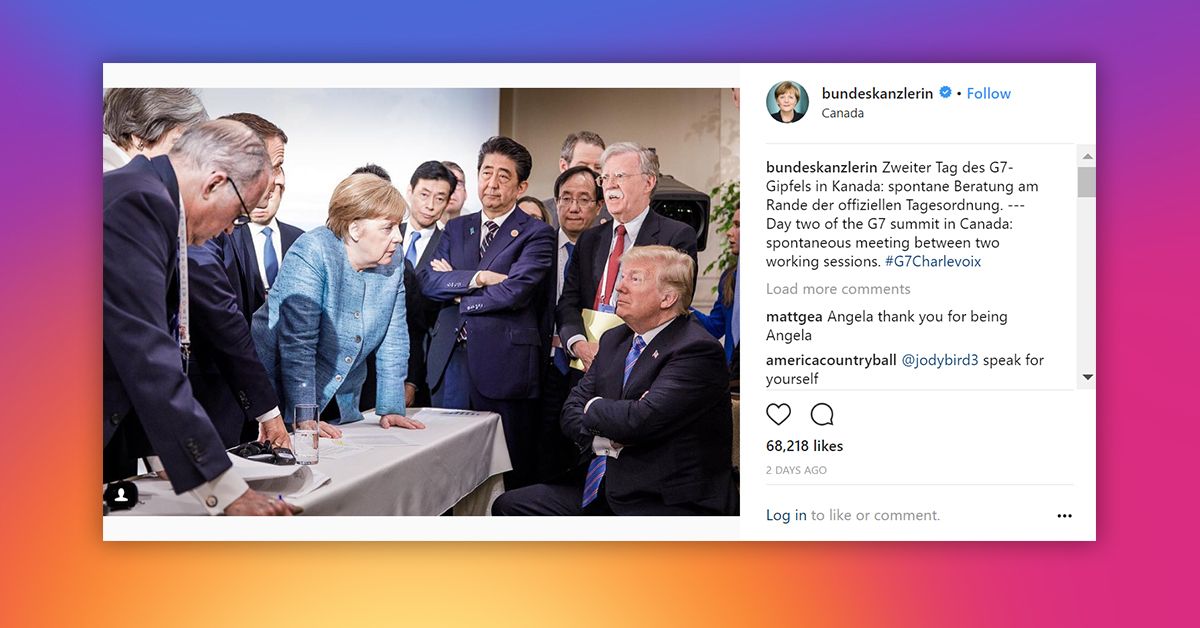 Claim:
President Donald Trump was photographed during the G7 summit sitting down opposite Germany prime minister Angela Merkel with his arms crossed.
Rating:

A 9 June 2018 photograph of President Donald Trump during a meeting with other world leaders received enough attention online that some readers contacted us asking if it was real.

The picture, taken during the Group of 7 summit in Canada on 9 June 2018, was taken by Jesco Denzel, who was photographing the event in an official capacity for the German government. It was published on German Prime Minister Angela Merkel's Instagram page, and also by several news wire services:

The image of Merkel standing in front of Trump, who was seated with his arms crossed, was spread widely online, with some users comparing it to classical paintings. However, it was not the only photo released from the encounter; White House director of social media Dan Scavino Jr. posted his own photograph on Twitter:

A look at negotiations, from behind the scenes at the #G7Charlevoix Summit. pic.twitter.com/2LdJAgt6fE

Similarly, photographers from other G7 nations published their own images from the scene.

We contacted Denzel, who declined to comment. However, German government spokesperson Steffen Seibert addressed the photograph during a press conference on 11 June 2018:

In the social networks, we strive, in addition to the factual information that we give there to the citizens, using the photos of the official photographers also gain visual insights into the work of the Federal Chancellor, in this case, the working atmosphere of a G7 summit.

Regarding the idea that the photograph showed Trump sitting "like a schoolchild," Seibert said, "It lies in the eye of the beholder."