Did Real Clear Politics Take Penn. 'Away' From Biden After Lawsuit News?

It is challenging to take something away that was never given in the first place. 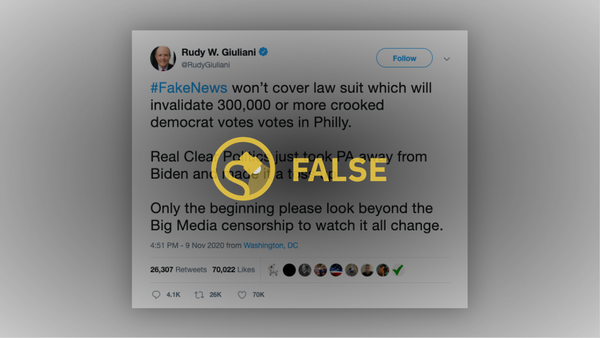 Claim:
Media outlet Real Clear Politics projected Joe Biden to win Pennsylvania in the 2020 U.S. presidential election but rescinded that call after news of a lawsuit that could "invalidate 300,000 or more" Democratic votes.
Rating:

On Nov. 9, 2020, Rudy Giuliani, personal attorney to U.S. President Donald Trump, tweeted about the purported media refusal to cover lawsuits he and other presidential allies had filed in an attempt to sow doubt about, or overturn the results of, the 2020 presidential election. In that tweet, he asserted that media company Real Clear Politics had called the state of Pennsylvania for U.S. President-Elect Joe Biden, but had taken that call back following the specter of a lawsuit that would, in Giuliani's words, "invalidate 300,000 or more crooked democrat votes votes in Philly." Former Trump Administration Press Secretary Sean Spicer also made this claim. In fact, as both archived views of RealClear's elections results page and their Editor-in-Chief Tom Bevan made clear, the site never called Pennsylvania for Biden in the first place, making the claim of a recent switch to a "toss up" therefore indefensible. As for the lawsuit, the invalidation of 300,000 votes is a fantasy based on a long-shot legal play. While the Trump campaign has filed several lawsuits in the state, the most recent effort at the time of this writing is an effort to prohibit the state from "Certifying the results of the General election," or, in the alternative, preventing them "from certifying any results from the General Election that included the tabulation of absentee and mail in ballots which do not comply with the Election Code." The potential violation of election code laws referenced relies on a largely unsubstantiated list of complaints about fairness in poll watching and ballot curing. That case is currently pending.

Because Real Clear Politics never called Pennsylvania for Biden, the claim that it switched its call after news of the Trump campaign's legal actions is therefore false.