Did Reagan Say ‘No Reason’ to Carry Loaded Guns in Public?

Readers emailed us to ask if former U.S. President and California Gov. Ronald Reagan once made a statement about carrying loaded weapons in the streets. 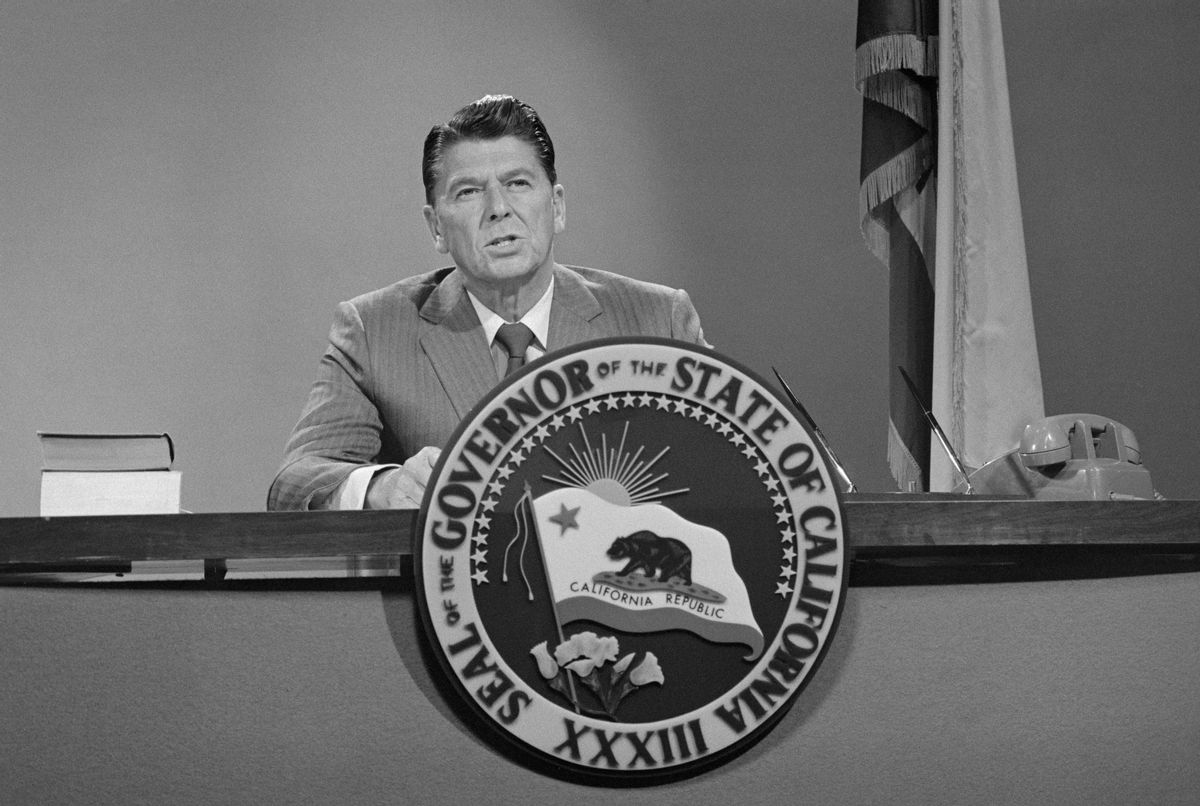 Claim:
Former Republican U.S. President and California Gov. Ronald Reagan once said, "There is absolutely no reason why out on the street today a civilian should be carrying a loaded weapon."
Rating:

Reagan said these words on May 2, 1967, during his first term as governor of the state of California. In the quote, he was referring to the fact that members of the Black Panther Party had just moments before been walking around the steps of the state Capitol with loaded weapons. All of this happened near school children who were also outside the Capitol that day. Some of the Black Panther Party members entered the Capitol with the loaded guns, even making it into the Assembly chamber while legislators were in session. They were disarmed by police officers and later led back outside. Their guns were returned to them.

Former U.S. President and California Gov. Ronald Reagan purportedly said of the idea of open carry guns, "There is absolutely no reason why out on the street today a civilian should be carrying a loaded weapon." Readers asked if this was a genuine quote. We were able to locate reporting in newspaper archives and even an audio recording, both of which confirmed that Reagan did indeed say these words.

We received an email from a reader who asked about the quote in the aftermath of the deadly school shooting in Uvalde, Texas. The May 24, 2022, mass shooting resulted in the death of 19 children and two adults. Seventeen others were wounded, including both children and adults. The tragic incident reignited the debate over enacting stricter gun control laws in the U.S.

Also noteworthy at the time we received the reader inquiry was that the man who shot Reagan during his presidency, John Hinckley Jr., was just days away from a court approving his freedom. Hinckley shot Reagan in 1981, though the president survived. According to CBS News, Hinckley was found "not guilty by reason of insanity" in 1982, but remained hospitalized for many years.

Reagan’s quote about there being “no reason” a person “should be carrying a loaded weapon” in public was spoken in front of a group of reporters on May 2, 1967. To set the scene, Reagan, a member of the Republican Party, said the words while standing just outside of the California state Capitol in Sacramento. At the time he was serving his first term as governor in the same state.

Earlier on the same day, before Reagan spoke the words in the aforementioned quote, members of the Black Panther Party had gathered outside of the Capitol with loaded weapons. According to Brittanica.com, the Black Panther Party was “an African American revolutionary organization that was formed in 1966,” whose “initial purpose was to patrol Black neighborhoods to protect residents from police brutality."

According to archives from The Modesto Bee, which were hosted on Newspapers.com, the newspaper reported in May 1967 that the Black Panther Party members who gathered at the Capitol were "denouncing the police” and called them “racist dogs.” “Because I'm Black, you hate my Blackness,” one of the members said. Another member explained that they were armed "because of 'white racist cops in our Black community.'" The Black Panther Party members "were carrying pistols, rifles, and at least one sawed-off shotgun." The reporting also said that one police estimate put the number of party members at the Capitol that day at “as many as 50 men.” School children were in the same space outside of the building at the same time, which concerned their chaperones enough to try to “hustle” them inside.

Entering the Capitol with Loaded Weapons

After the Black Panther Party members gathered outside of the Capitol, about two dozen of the members entered the Capitol with their loaded weapons. Ten of the about two dozen members then entered the back of the Assembly chamber while legislators were in session. According to the Modesto Bee, the men were disarmed by police officers and "put on an elevator and taken down to the Capitol police station." They were then led back outside. The members’ guns were returned to them because there was “no law against carrying weapons which are not concealed." Two members of the Black Panther Party are met on the steps of the state Capitol in Sacramento, May 2, 1967, by Police Lt. Ernest Holloway, who informs them they will be allowed to keep their weapons as long as they cause no trouble and do not disturb the peace. Earlier, several members had invaded the Assembly chambers and had their guns taken away. (Courtesy: Bettmann / Contributor)

Brittanica.com published that May 2, 1967, was perhaps the day that the Black Panther Party emerged on a national scale:

Emboldened by the view that African Americans had a constitutional right to bear arms (based on the Second Amendment of the U.S. Constitution), the Black Panther Party marched on the body as a protest against the pending Mulford Act.

The Black Panther Party viewed the legislation, a gun control bill, as a political maneuver to thwart the organization’s effort to combat police brutality in the Oakland community.

History.com published that the Mulford Act prohibited "the open carry of loaded firearms" and included "an addendum prohibiting loaded firearms in the state Capitol." The California bill, which increased gun control, was even supported by the National Rifle Association (NRA). It passed on July 27, 1967, just weeks following the events at the Capitol involving the Black Panther Party members and their loaded weapons.

Gov. Reagan emerged from the Capitol as the armed group marched down the steps and away from the building.

Reagan, surrounded by youngsters and newsmen, was on his way to a Capitol park picnic with a group of 8th graders from Pleasant Hill.

He said: "There's no reason why on the street today the citizen should be carrying loaded weapons."

Reagan also said it was a "ridiculous way to solve problems that have to be solved among people of good will." He added he was against "even the implied threat weapons might be directed against fellow Americans."

A longer quote from the audio recording was spoken by Reagan as follows, “But I would think that some of the bills that have been suggested such as not carrying a loaded weapon on a city street or in town, this might certainly be a good one. There is absolutely no reason why out on the street today a civilian should be carrying a loaded weapon.”

The audio of Reagan making the remarks can be listened to at the 21:41 mark on episode 64 of MSNBC’s “Into America Podcast”:

After this moment in 1967, Reagan’s views on the role of guns in American society mostly leaned against increased gun control. More information regarding his views about guns and the Second Amendment can be found in our previous reporting of yet another Reagan quote about firearms, as well as on the website for the Ronald Reagan Presidential Library & Museum.

In sum, yes, Reagan did once say the words, "There is absolutely no reason why out on the street today a civilian should be carrying a loaded weapon."

“Hinckley, Who Shot Reagan, Says Thanks After Winning Freedom.” Snopes.com via The Associated Press, 3 June 2022, https://www.snopes.com/ap/2022/06/03/hinckley-who-shot-reagan-says-thanks-after-winning-freedom/.

La Corte, Rachel, and Andrew DeMillo. “States Divided on Gun Controls, Even As Mass Shootings Rise.” Snopes.com via The Associated Press, 26 May 2022, https://www.snopes.com/ap/2022/05/26/states-divided-on-gun-controls-even-as-mass-shootings-rise/.