Did Reagan Say 'You Won't Get Gun Control by Disarming Law-Abiding Citizens'?

A quote meme with former U.S. President Ronald Reagan's image also said "it's a nasty truth" that "those who seek to inflict harm are not fazed" by gun control laws. 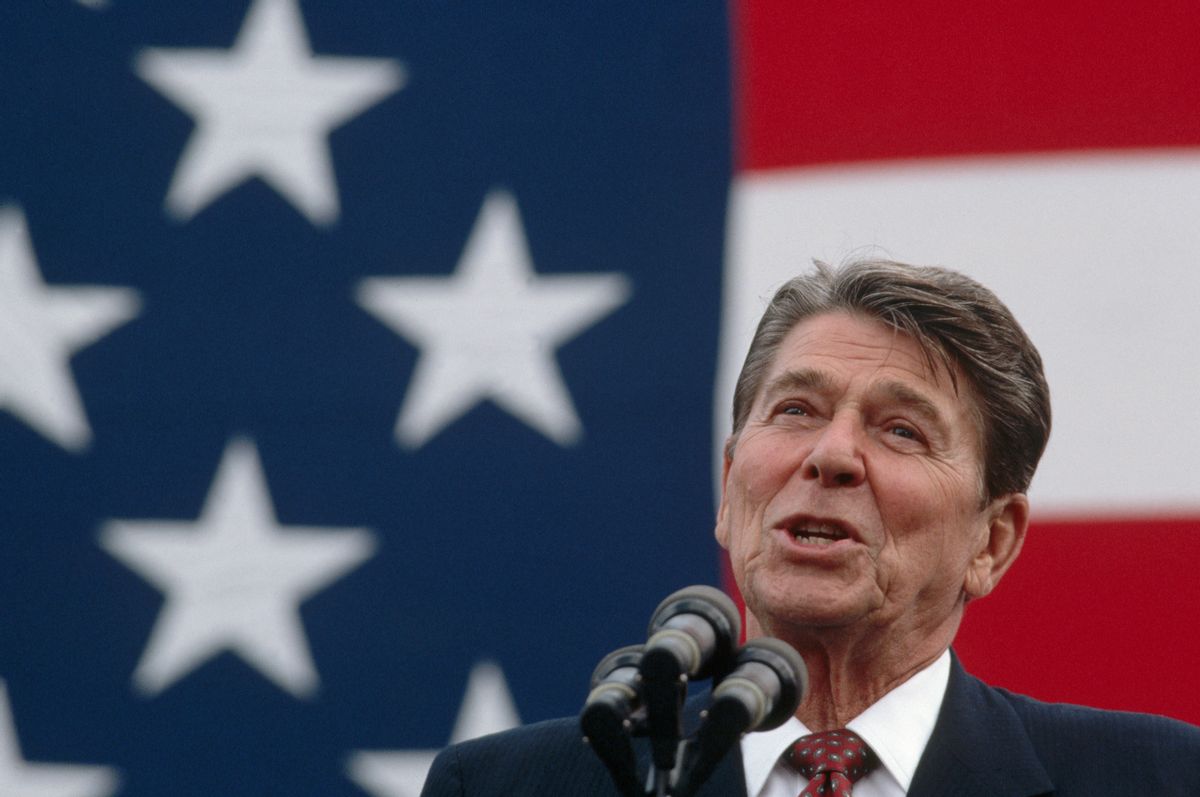 Claim:
Former U.S. President Ronald Reagan once said that "you won't get gun control by disarming law-abiding citizens" and "it's a nasty truth" that "those who seek to inflict harm are not fazed" by gun control laws.
Rating:

It's true that Reagan said these words, though he did so in two separate speeches in 1983. However, the meme deserves extra context regarding the former president's support for, or engagement with, proposals to restrict who can legally access firearms in America over the course of his political career.

A quote meme with an illustration of former U.S. President Ronald Reagan began with the words, "You won't get gun control by disarming law-abiding citizens." By the end, the meme claimed that he also said "it's a nasty truth" that "those who seek to inflict harm are not fazed" by gun control laws. These were real remarks from two different speeches in 1983, both delivered by Reagan. At the same time, the quote meme did not fully spell out the 40th president's history with regard to laws to restrict or change who can legally buy firearms in America.

This was one of the most shared versions of the Reagan quote meme.

The full quote in the Reagan gun control meme read: "You won't get gun control by disarming law-abiding citizens. There's only one way to get real gun control: Disarm the thugs and the criminals, lock them up and if you don't actually throw away the key, at least lose it for a long time… it's a nasty truth, but those who seek to inflict harm are not fazed by gun controllers. I happen to know this from personal experience."

At the time of this writing on June 1, 2022, the meme was being shared on Facebook and Twitter by users who appeared to be advocating for the Second Amendment. One of those users was a Republican state senator from Mississippi, Sen. Chris McDaniel. They were sharing the meme amid talks to enact stricter gun control laws in the U.S. following the deadly school shooting at Robb Elementary in Uvalde, Texas, that killed 19 children and two adults. (Joe Garcia, the husband of slain teacher Irma Garcia, also suffered a fatal heart attack two days after the shooting, and a family member attributed his death to grief.)

As for the quote meme about gun control, according to archives kept by the Ronald Reagan Presidential Library & Museum, the first part with the words, "You won't get gun control by disarming law-abiding citizens" came from a speech made by Reagan on June 30, 1983. The speech was titled, "Remarks at a California Republican Party Fundraising Dinner in Long Beach."

The second part of the meme with the "nasty truth" comment came from a speech Reagan gave about eight weeks earlier. The former president gave that May 6 speech in front of members of the National Rifle Association (NRA). It was titled, "Remarks at the Annual Members Banquet of the National Rifle Association in Phoenix, Arizona." (Let us note here: There was a slight difference in wording, though not in meaning, between that speech transcript and the meme. Reagan actually said "by gun control laws," not "by gun controllers," as the meme claimed.)

While it's true that the words in the quote meme were correctly attributed to Reagan, these remarks alone did not fully spell out the former president's positioning on gun control laws. In 1986, about three years after the above-mentioned speeches, Reagan signed the Firearm Owners' Protection Act. According to NBC News, the legislation "eased the penalties from the 1968 law, banned a federal registry of gun owners, and disallowed the ATF's power to inspect gun dealers." This legislative action by Reagan leaned in the favor of supporters of the Second Amendment. ("The 1968 law" referred to the Gun Control Act of 1968, which "regulated interstate and foreign commerce in firearms, including importation, 'prohibited persons', and licensing provisions.")

That said, Reagan's history on gun control is a bit of a "winding road," as PolitiFact reported in 2013.

In 1991, Reagan published an op-ed in The New York Times, where he stated his support for a system of "background checks for criminal records or known histories of mental disturbances" that would be maintained by federal authorities. The op-ed also promoted the idea of a waiting period for potential gun owners to make firearm purchases. These were both part of the Brady Handgun Violence Prevention Act, better known as the Brady bill or Brady law. Congress passed that policy package in 1993. It was named after former White House Press Secretary James Brady, who was left paralyzed after an assassination attempt on Reagan in 1981. (This was presumably the "personal experience" with guns that Reagan referred to in the May 1983 speech and the meme references at its end.)

In a 1994 letter written to the U.S. House of Representatives, he also supported a ban on military-style assault weapons. The letter was signed by Reagan and former U.S. Presidents Gerald Ford and Jimmy Carter. The letter began, "We are writing to urge your support for a ban on the domestic manufacture of military-style assault weapons. This is a matter of vital importance to the public safety."

In sum, yes, Reagan did once say that "you won't get gun control by disarming law-abiding citizens" and on a separate occasion said "it's a nasty truth" that "those who seek to inflict harm are not fazed" by gun control laws. However, the meme deserves extra context regarding the former president's support for, or engagement with, proposals to restrict who can legally access firearms in America over the course of his political career.

For further research on the complete history of the former president's positions on guns and other issues, readers are free to visit the archives on the Ronald Reagan Presidential Library & Museum website.