Was Justice Ginsburg the First Woman To Lie in State at the US Capitol?

The late justice was the second woman appointed to the U.S. Supreme Court and was described as a pioneer for women’s rights. 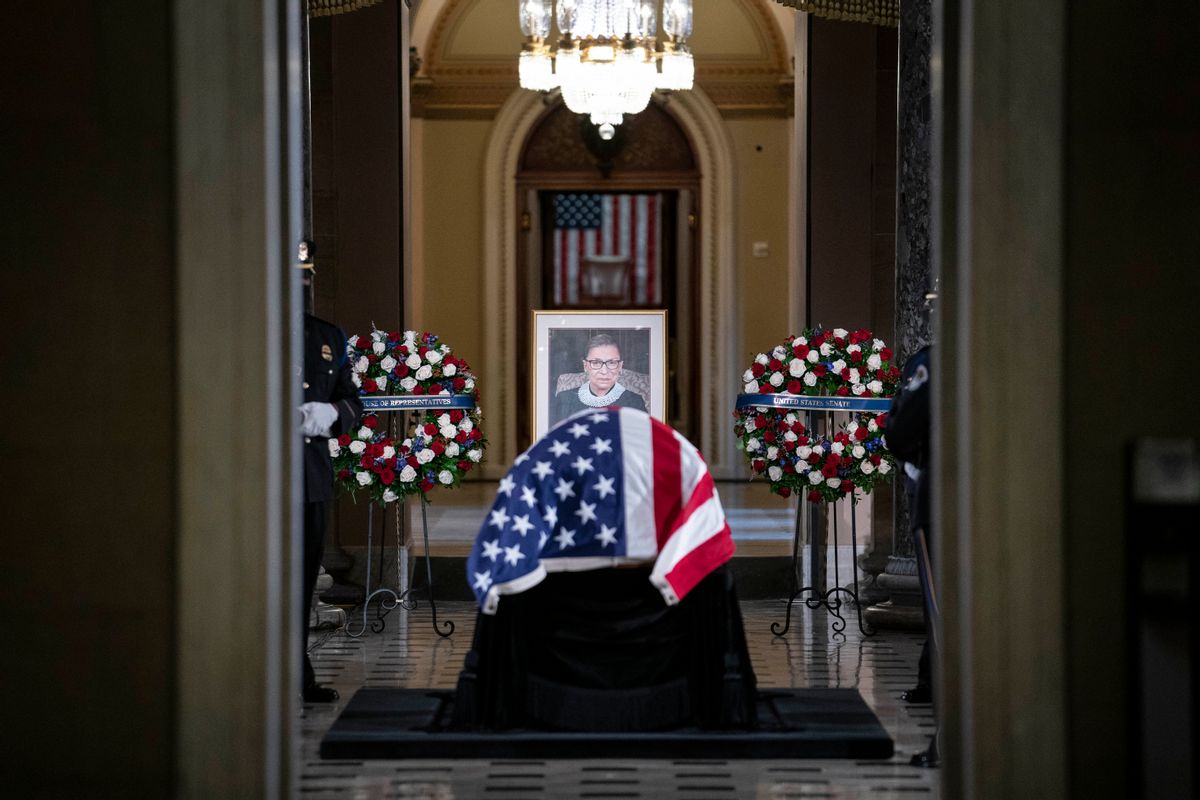 Claim:
Shortly after her death on Sept. 18, 2020, U.S. Supreme Court Justice Ruth Bader Ginsberg became the first woman in American history to lie in state at the U.S. Capitol.
Rating:

Snopes readers asked us to verify the claim that Ginsburg was actually the second woman to lie in state — sometime after the remains of civil rights Activist Rosa Parks were laid in the Capitol more than a decade earlier. As it turns out, Parks was lain in honor, not in state, the differences between which we detail below.

Some background first: Ginsberg died on Sept. 18, 2020, in her Washington, D.C., home at the age of 87 of complications from metastatic pancreatic cancer. Shortly after her remains were lain in state in the Capitol building, a 2005 article published by Democracy Now recirculated on the internet, in which its original authors inaccurately reported that Parks was the "first woman and second African American to lie in state."

While it is true that the remains of both Parks and Ginsburg lay in the U.S. Capitol in the District of Columbia following their deaths as a way to pay special homage to their service to the country, the distinction of having been lain in state or in honor depends on the reason for their recognition. When distinguished citizens die, their remains will sometimes be placed in the U.S. Capitol — either in Statuary Hall or the Rotunda — and made available for public viewing as a way to allow others to pay tribute to, or honor, their lives. Traditionally, though, American officials, judges, and military leaders are those who are "lain in state," an honor generally reserved for government officials and military members like Ginsburg, according to the Architect of the Capitol (AOC).

“[But] no law, written rule, or regulation specifies who may lie in state; use of the Rotunda is controlled by concurrent action of the House and Senate,” noted the AOC, a federal agency that preserves and maintains the historic buildings, monuments, art and gardens on the U.S. Capitol campus in the District of Columbia.

“Any person who has rendered distinguished service to the nation may lie in state if the family so wishes and Congress approves.”

Ginsburg was the second woman to have been appointed to the U.S. Supreme Court and was described as a pioneer of women’s rights. As a confirmed Supreme Court justice, she was the first woman to lie in state in the U.S. Capitol, said AOC Public Affairs Specialist Laura Condeluci in an email to Snopes. Following her 2005 death, Parks was the first woman to lie in honor in the U.S. Capitol — the distinction generally reserved for a private citizen.

In 1998, Congress granted the use of the Capitol building for citizens to “lie in honor” following the deaths of two Capitol police officers, Officer Jacob Chestnut Jr. and Detective John Gibson, who were killed in the line of duty. In 2005, Rosa Parks became the third person to lie in honor in the Capitol Rotunda, followed by Evangelical leader Rev. Billy Graham in 2018, according to the U.S. House of Representatives.

In September 2020, Ginsburg became the first woman to join the list of dozens of male political or military leaders to lie in state in the Capitol building since Henry Clay, former speaker of the house and secretary of state, was first recognized on July 1, 1852. Other notable government officials and private citizens include Abraham Lincoln, John F. Kennedy, Lyndon B. Johnson, Ronald Reagan, and unknown soldiers from World War II, the Korean War, and the Vietnam War.

Chute, Nate.   "Is Ruth Bader Ginsburg the First Woman to Lie in State at the US Capitol or was Rosa Parks?."     Montgomery Advertiser.   25 September 2020.