Does This Video Show Raz Simone Handing Out Guns in Seattle's CHOP?

The rapper had been described by some as the "leader" of the Capitol Hill Organized Protest (CHOP) during anti-police-brutality protests in Seattle in spring 2020. 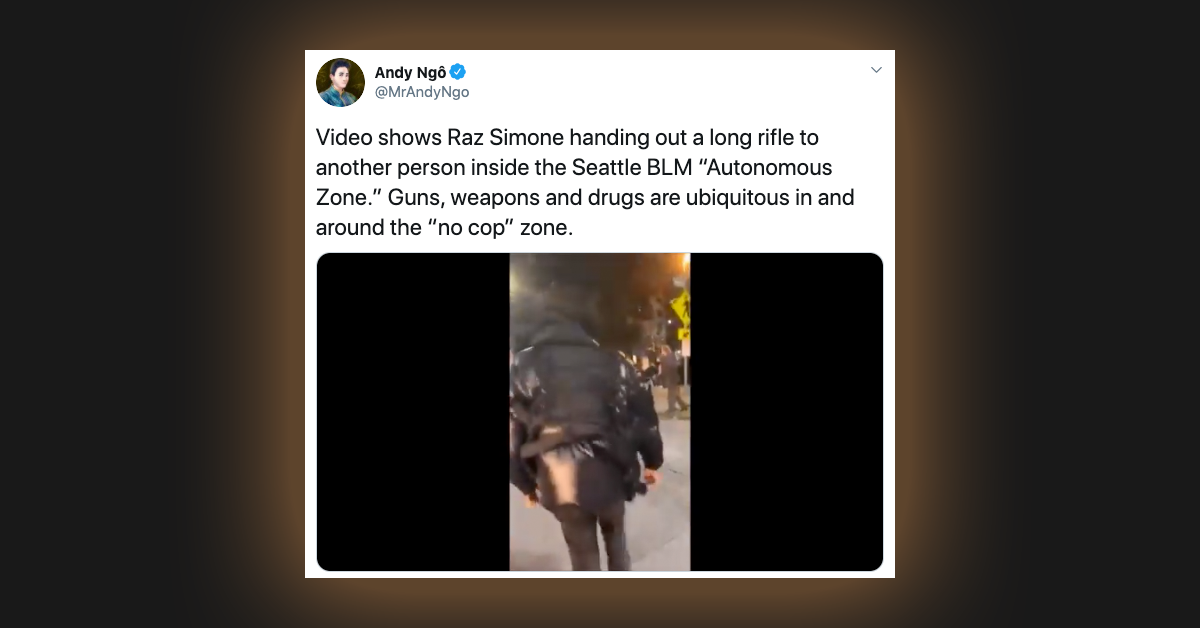 On June 15, 2020, right-wing commentator Andy Ngo tweeted a video showing Raz Simone, described by some as the leader of the Capitol Hill Organized Protest (CHOP) in Seattle, “handing out a long rifle to another person inside the Seattle BLM.” Simone, a Seattle-based rapper and activist, is often described — at least in conservative media reports — as the leader of this particular Black Lives Matter protest. Such protests swept across the U.S. after the May 25 death of George Floyd, a Black man, while in the custody of a white police officer in Minneapolis.

The clip is genuine and comes from a 5 1/2-hour Facebook Live video streamed on Simone’s profile. The moment highlighted by Ngo, in which Simone appears to give a gun to a self-identified 18-year-old he does not appear to know, begins at around the 2:08:00 mark. While the CHOP has no formal leader, Simone has been active in “security” operations and in mediating discussions between protesters and the city. Simone’s livestreamed videos from the CHOP have been viewed hundreds of thousands of times. In those videos, he can be seen speaking to crowds, to individual protesters, and to city personnel.

Although it was shared on June 15, 2020, the video Ngo tweeted took place on the night of June 8, 2020, which was the first night of the CHOP protest. The day before, Nikolas Fernandez drove toward a crowd of protesters and shot one in the arm before fleeing toward the police. That evening, police cleared the protest, which had been blocked from progressing past the Seattle Police East Precinct, using flash bombs and chemical irritants. The next day, with tensions heightened, police removed barriers that had blocked protesters from the East Precinct, secured the building, and gradually removed officers from the area. As described in The Stranger, an alternative bi-weekly newspaper, protesters took the opportunity to occupy the area abandoned by police:

For several minutes, others in the crowd moseyed around in the intersection, wondering what to do next. Suspicion understandably reigned. Why did the cops decide to pack up their shit and abandon their post? Were they trying to set up the protesters, expecting them to burn the place down to prove a point?

Organizers first gathered people to the center of the intersection on 12th and Pine and encouraged the crowd to keep the peace. … They drained water from water barriers and set up a perimeter one block in every direction from the station. Bicycle fencing, cement blocks, and cars formed street barricades. On 11th and Pine, a cardboard sign duct-taped to a barrier read, "You Are Entering Free Capitol Hill.

The move, according to an explanation from Seattle Mayor Jenny Durkan five hours after the fact, was meant to “proactively de-escalate interactions between protestors and law enforcement outside the East Precinct.”

But the first night in “Free Capitol Hill,” while peaceful, was characterized by paranoia. In an unexpected development, protesters were now — in their eyes — responsible for their own security, and a rumor developed that members of the right-wing group Proud Boys were going to move into the protest area to set fires and stir chaos.

Simone repeatedly refers to this rumor with other protesters in the five-hour long video shot that night, and the moment highlighted in the Ngo video stemmed from a (false) report of Proud Boys gathering at one of the barricades.

In sum, because the video is from Simone’s own Facebook Live stream, we rank the claim that a video shows him distributing a rifle from the trunk of his car as "True."

Smith, Rich.   "Nikolas Fernandez Held on First-Degree Assault After Allegedly Driving Into Crowd and Shooting a Protester on Capitol Hill.”     The Stranger.   8 June 2020.