Did Rashida Tlaib Celebrate the Holocaust, Say It Gave Her a 'Warm Feeling'?

Right-leaning websites grossly distorted the nuanced reflections of the Michigan Congresswoman on what happened in Palestine after World War II. 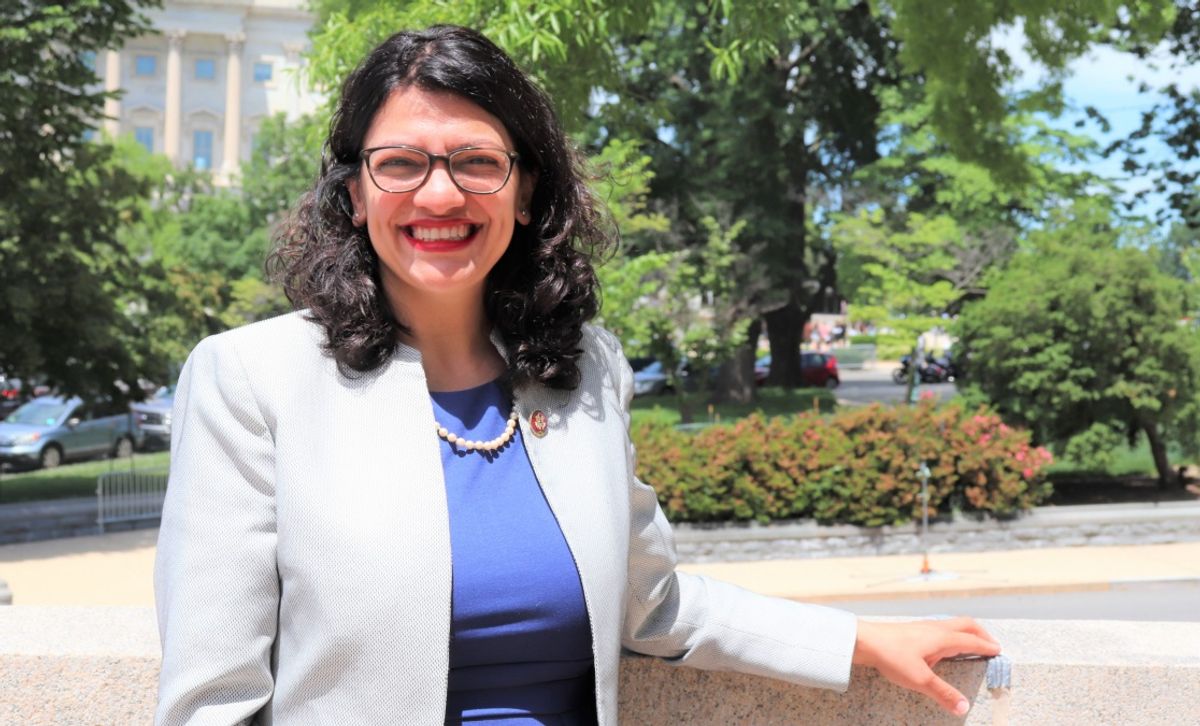 Claim:
U.S. Rep. Rashida Tlaib expressed joy and celebration about the Holocaust, saying it gave her a "warm feeling."
Rating:

Right-leaning websites and Republican politicians criticized one of the country's first female Muslim members of Congress in 2019, claiming that she had celebrated the Holocaust and said thinking about the extermination of millions of Jews gave her a "warm feeling."

U.S. Rep. Rashida Tlaib (D-Mich), has been the target of intense scrutiny and criticism, as well as politically-motivated misinformation, since her successful 2018 House campaign saw her join U.S. Rep. Ilhan Omar (D-Minn.) as the first Muslim woman in history to hold a seat in either Congressional body.

In May, the conservative website Townhall published an article whose headline read "Tlaib: When I Think About the Holocaust I Get a 'Warm Feeling.'" The article accused the Congresswoman of anti-semitism, writing: "Just when we think that [Rashida Tlaib] couldn't get any more anti-semitic, she proves us wrong."

Multiple blogs and right-leaning websites followed Townhall's example, repeated and amplified the claim that, in a fit of anti-semitic pique, Tlaib had expressed joy or celebration at the thought of the Holocaust. Each of them -- including former Republican Alaska U.S. Senate candidate Joe Miller and the website of anti-Muslim commentator Pamela Geller -- claimed Tlaib had said the thought of the extermination of millions of Jews gave her a "warm feeling."

These claims were inaccurate, but more substantively, they were grossly misleading and misrepresented the actual sense and context of what was said by Tlaib, who called the Holocaust "horrific" and a "tragedy."

The source of these inaccurate and misleading claims was a May 10, 2019, interview Tlaib gave to the Yahoo! News podcast "Skullduggery." In one segment of the conversation, the Congresswoman, who grew up in Detroit to Palestinian immigrant parents, was asked about her foreign policy stances, including her support for a one-state solution to the Israeli-Palestinian conflict.

(With some variation on details, one-state advocates typically call for the establishment of a single independent nation-state encompassing what is now the state of Israel, along with the Palestinian territories of the West Bank and Gaza. Republican and Democratic party orthodoxy has historically proposed a two-state solution, which entails an independent Palestinian nation-state and independent Israeli nation-state, with the border between the two to be negotiated.)

A video of the key portion of the interview can be viewed below. What follows is a lightly-edited transcript of that section, which begins with a question by Dan Klaidman, editor-in-chief of Yahoo! News:

Tlaib: "Absolutely, and let me tell you -- I mean for me, I think two weeks ago or so, we celebrated, or took a moment or so, I think, in our country, to remember the Holocaust. And there's, you know, there's a kind of a calming feeling, I always tell folks, when I think of the Holocaust and the tragedy of the Holocaust, in the fact that it was my ancestors, Palestinians, who lost their land and some lost their lives, their livelihood, human dignity, their existence in many ways has been wiped out ... was in the name of trying to create a safe haven for Jews, post [sic] the Holocaust, post [the] tragedy and horrific persecution of Jews across the world at that time.

"And I love the fact that it was my ancestors that provided that ... in many ways. But they did it in a way that took their human dignity away ... and it was forced on them. So when I think about a one-state [solution], I think about the fact that -- why couldn't we do it in a better way? Where -- and I don't want people to do it in the name of Judaism, just like I don't want people to use Islam in that way -- it has to be done in a way of values around equality and around the fact that you shouldn't oppress others so you can feel free and safe. Why can't we all be free and safe together?"

Tlaib was referring in her remarks to the immigration of Jewish refugees, after World War II and the Holocaust, into what was then British-ruled Palestine. The withdrawal of British interest from the territory precipitated the first major Arab-Israeli conflict in the form of the 1948 Palestine War, which displaced hundreds of thousands of Palestinian Arabs and ultimately led to the establishment of the modern state of Israel in 1948.

The Congresswoman's comments were nuanced. On the one hand, she appeared to firmly regret what had happened to Palestinian Arabs during this time, saying they had lost their lives, livelihoods and "human dignity" in the creation of a "safe haven" for Jews fleeing Europe after the Holocaust.

However, she also articulated a feeling of satisfaction or at least peaceful reconciliation with the fact that it was the suffering of her own ancestors which had, indirectly, allowed many Jews to find refuge in what became the state of Israel. ("I love the fact that it was my ancestors that provided that.")

It was to these points that she referred when she described the "calming feeling" she experiences, when contemplating the Holocaust, which she described as a "tragedy" and said involved the "horrific persecution of Jews."

Rather, Tlaib was referring to the aftermath of the Holocaust, and the provision of refuge to Jews in Palestine, even at the cost of displacing hundreds of thousands of Palestinian Arabs, among them Tlaib's own ancestors. In this respect, the Congresswoman's remarks actually had rather the opposite sense to the impression created by the websites and commentators cited above.

Nonetheless, Republican politicians quickly responded with outrage to the podcast interview. President Donald Trump described Tlaib's remarks as "horrible and highly insensitive" and falsely claimed "She obviously has tremendous hatred of Israel and the Jewish people."

After the publication of their article, Townhall changed its headline to read: "Tlaib: When I Think About the Holocaust This Way I Get a Calming Feeling." As of July 2019, the other websites cited above had not done likewise.