Are These VHS Tapes 'Rare' and Worth Big Money?

An advertised list reported that first-release VHS tapes of "Barney: Waiting for Santa," "Halloween," "Star Wars," and others were rare and worth good money. 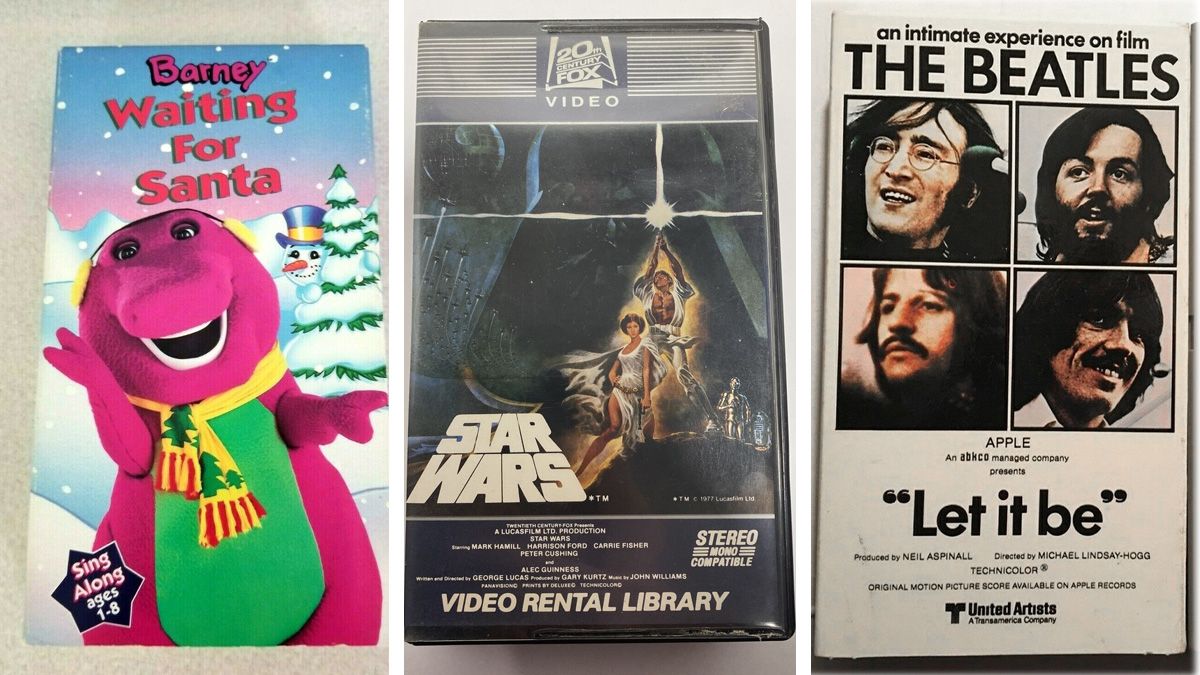 Claim:
A list shows a handful of rare VHS movies and specials that can land a nice sum for owners — potentially even hundreds or thousands of dollars.
Rating:

The original 1982 release of "Star Wars" on VHS (hard case), The Beatles film "Let It Be," the 2000 edition of "WCW Bash at the Beach," and specific versions of the original "Halloween" and "Halloween II" VHS tapes appear to be somewhat rare and should fetch a good sum of money for eBay sellers.

However, opened versions of the other videotapes on the list likely won't fetch more than a few dollars on eBay. Also, opened VHS copies of "Black Diamond Collection" and "Masterpiece" editions of Disney animated films are not worth hundreds or thousands of dollars.

It's undetermined if a small number of extremely high-priced eBay listings were ever paid by the buyers. These listings mostly came from brand-new seller accounts with a 0 rating.

In late January 2021, the viral content website Ice Pop advertised online a list of purportedly "rare" VHS tapes. The headline from the story read: "These VHS Tapes Can Land a Nice Sum for Owners." It was originally published by the website Direct Expose in November 2019:

Thought about throwing out your old collection of VHS tapes? Think again. It might be surprising to some, but on eBay, mint condition VHS tapes have been selling from anywhere between a couple of dozens to thousands of dollars! Forget about finding sunken treasure, you might just have a few gold nuggets stored away in your attic.

Several of the VHS tapes to make the list were Disney animated classics. We previously reported that "Black Diamond Collection" Disney films had often been listed on eBay for hundreds or even thousands of dollars. However, the price a seller lists an item for does not determine its value. Value is determined by sales, not a seller's initial asking price.

In our search for the titles below, we found a few ridiculously high "sold listings" for a number of titles. However, we noticed that the vast majority of those "sold listings" were made by brand-new sellers with an extremely low seller rating. Most of them had a seller rating of 0. It was unclear if these listings were some sort of scam. We reached out to eBay and they responded to us. However, they declined to comment.

We searched eBay for sold listings for all of these supposedly "rare" VHS tapes on the list. The value claimed by Direct Expose and Ice Pop appears below next to each title: "Barney: Waiting for Santa" was released on VHS in 1990. It was part of the Barney Home Video series of tapes.

False. No need to pay anywhere close to $90 for "The Hunchback of Notre Dame." Various versions of the 1996 Disney animated film had sold on eBay for $0.99, and that included the "Masterpiece" edition. The 1982 release was a truly rare VHS tape. However, later VHS versions of "Episode IV: A New Hope" sold on eBay for far less, as did "Episode V: The Empire Strikes Back" and "Episode VI: Return of the Jedi."

False. Buyers won't need to spend hundreds of dollars on eBay for a VHS copy of "Fantasia." We found a sold listing for $1.95, and the rest weren't much higher.

True. Like the original 1982 VHS edition of the first "Star Wars" film, it was very true that the "Let It Be" VHS tape was rare and worth more than $100. False. The "Black Diamond Collection" edition of "The Lion King" had sold in listings that ended at $3.99 and $7.70, for example. We even found a single listing with three VHS films that sold for a total of $14.99: "Beauty and the Beast," "Aladdin," and "The Lion King."

False. We found a sold listing for the original VHS edition of "Sleeping Beauty" for 99 cents. The "Masterpiece" edition also only sold for a few dollars.

True. The list on the Ice Pop and Direct Expose websites claimed that the 2000 edition of "WCW Bash at the Beach" sold for $500. It featured Hulk Hogan. This VHS tape appeared to be rare, and we only found two sold listings that ended at $300 and $500.

False. No matter which version of "The Sword in the Stone" was searched for on eBay, they all sold for 99 cents, $1.90, $3, $10, etc. We found one listing that ended at a whopping $1,500. However, the seller had a rating of 0. It was unclear if the listing was a scam, or if a transaction actually ended up occurring.

False. Most sold listings for "The Jungle Book" ended for less than $10. We did notice one sold listing that went for $300. However, like the strange $1,500 listing for "The Sword in the Stone," the seller had a rating of 0. It might have been a scam, and the seller might not have been paid.

It's true that the original version of "The Rescuers" on VHS contained an image of a topless woman.

False. "The Fox and the Hound" appeared, at first, to be one of the pricier Disney animated VHS finds. It's true that a handful of buyers snagged the film for less than $5, including a bunch of $1 listings. However, we were surprised to find sold listings that ended at $100, $120, $270, $400, and even $5,000. The seller of the $120 listing appeared to be legitimate with a rating of 343 and 98.9%. However, the rest of the $100+ sellers had 0 or 1 for their ratings, which perhaps meant they were not legitimate listings. We've reached out to eBay about a handful of these high-priced listings, but they declined to comment on if the sellers were ever paid.

False. The VHS edition of "The Little Mermaid" could easily be purchased on eBay for around $10-15. We noticed quite a few listings for "The Little Mermaid" on VHS sold for hundreds or even thousands of dollars. One listing even went for $10,000. As with other titles we've covered on this list, most of the high-priced sold listings had sellers with a 0 for their rating. It was unclear if it was a scam or if they ever got paid.

At the same time, a brand-new and sealed version of "The Little Mermaid" did go for $999.97. The seller had strong ratings and it did not appear to be a scam. The listing's tape featured "banned" cover art that we previously reported on in another story. While researching the value of the "Halloween" VHS tape on eBay, we found listings for the 1981 sequel, "Halloween II." Sellers that appeared to be trustworthy sold the sequel for $6,418.38, $12,000, and even $31,100. These sellers had good seller ratings. It was unclear if the buyers ended up paying these amounts. As noted above, we reached out to eBay, but they declined to comment.

False. Most eBay listings for "Dumbo" on VHS went for less than $15. Other than a brand-new and sealed version of the film that went for $150, we did not find any other listings for hundreds or thousands of dollars.

False. We were unable to find any trustworthy sold listings for "Aladdin" VHS tapes that went for thousands of dollars. We did notice one sold listing from a good seller that ended above $500. However, anyone looking to buy "Aladdin" on VHS should easily be able to do so for less than $20.

False. Plenty of eBay buyers have purchased the "Black Diamond Collection" edition of "Beauty and the Beast" for less than $10. We found nothing near $17,500, however.

False. Ice Pop and Direct Expose claimed that the 1961 animated classic "101 Dalmatians" and the next three on the list were all listed at over $25,000 "as part of a collection." The key word there is "listed." Listing an item is different than it actually being sold. The vast majority of the sold listings we found for VHS copies of the animated "101 Dalmatians" went for less than $10. Surprisingly, we did find one listing for $5,085 from a seller with a strong rating. We also found listings that sold for $10,000 and $1,425. However, those two sellers had a rating of 0. It was unclear if the three transactions of money ever occurred. As noted above, eBay declined to comment.

False. One listing for a brand-new and sealed version of the 1955 Walt Disney classic "Lady and the Tramp" sold for $80. However, the vast majority of listings for the animated film sold for less than $10. This was the second film mentioned by Ice Pop and Direct Expose that purportedly was listed (but not sold) for over $25,000.

False. Buyers should have no issue in snagging a copy of "Bambi" for less than $15. It's true that one listing ended at $300, but the seller had a rating of 0. It did not appear to be a legitimate listing. Ice Pop and Direct Expose claimed that "Bambi" was purportedly worth $25,476 as part of a listing of several VHS tapes. However, that listing did not sell for $25,476.

False. One listing for the 1950 Walt Disney classic "Cinderella" sold for $200, and the seller even appeared to be legitimate. However, this was an aberration. Most sold listings for the animated classic ended well under $15.

Again, we've previously reported on the mostly false "Black Diamond Collection" rumor that claimed classic Walt Disney films on VHS tapes are rare and worth hundreds or thousands of dollars. As a prime example, one listing with multiple bids for 48 Disney videotapes ended at $101. The $101 sold listing included many of the films on this list.

Sellers might be able to make some decent money if they list the original hard case edition of "Star Wars" from 1982, a copy of "Let It Be," the 2000 edition of "WCW Bash at the Beach," or perhaps specific original versions of "Halloween" or "Halloween II." The other titles would likely only fetch a few dollars.

Jan. 28, 2021: This story was updated to mention that eBay returned our correspondence. However, they declined to comment on if sellers were paid for the highest-priced listings.