Did a Babysitter Discover a 'Clown Doll' in a Child's Room Was a Real Person?

Reports that a convicted pedophile rapist was caught using a clown costume to hide in a child's room were fake news. 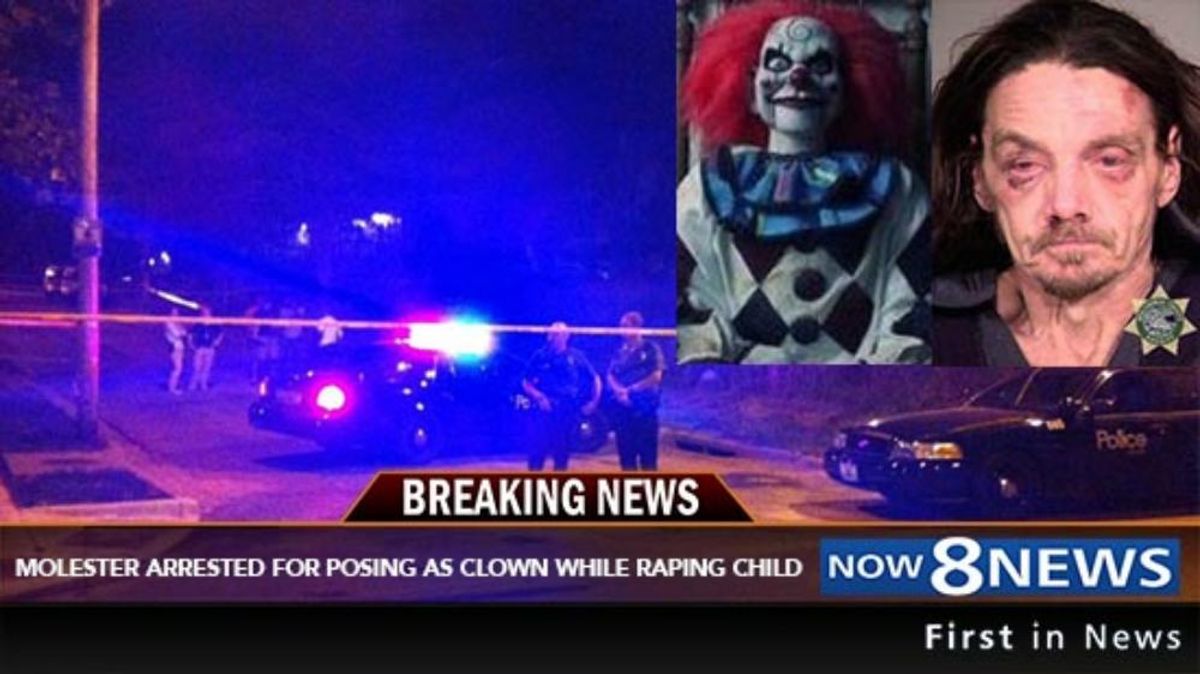 Claim:
A convicted pedophile rapist was caught using a clown costume to hide in a child's room.
Rating:

On 2 December 2015, the web site Now8News published a story reporting that a convicted pedophile was caught using a clown costume to hide in a child's room in Oregon:

If you are afraid of clowns we warn you — DO NOT READ ANY FURTHER — This true story out of Oregon is what nightmares are made of. A 48-year-old Oregon two-time convicted pedophile is now behind bars after he was caught molesting a six-year-old little girl while she was left at home in the care of a babysitter. According to police transcripts, the baby sitter tells a chilling story of how the attacker was discovered:

"The Jones' had me scheduled to babysit Thursday, Friday, and Saturday evening so they could go out of town for their anniversary," recalls the babysitter Chastity Cromwell in her report to the police. "On Thursday evening when I put the little girl to bed she said she was afraid to be alone. She told me the clown in the chair scared her. I told her to roll over and ignore it and just go to sleep. When I left the room she was screaming for about 30 minutes and when I checked on her she was hiding under the covers."

There was no truth to this report, however. Now8News is a clickbait fake news web site that publishes fabricated stories in order to drive traffic to the site and generate advertising revenues. Now8News has previously published hoax stories about McDonald's using fetuses to make McNuggets, a haunted house massacre, and a homeless couple living in the attic of a Walmart.

The aforementioned stories have two things in common: Not only are they all works of fiction, but they include real mugshots from unrelated crimes.

The mugshot included in the Now8News story about a rapist's employing a clown costume to hide in a child's bedroom actually shows Marvin Walker Jr., who was arrested in January 2015 after an attempted carjacking.

This fake news story mirrors an urban legend about serial killers disguising themselves as various inanimate objects.  While this legend reappears from time to time, it's safe to say that homicidal maniacs and pedophiles have not commonly taken to donning clown costumes and passing themselves off as items of home decor.