The Florida state representative is a fervent defender of the 2nd Amendment, but he did not tweet this. 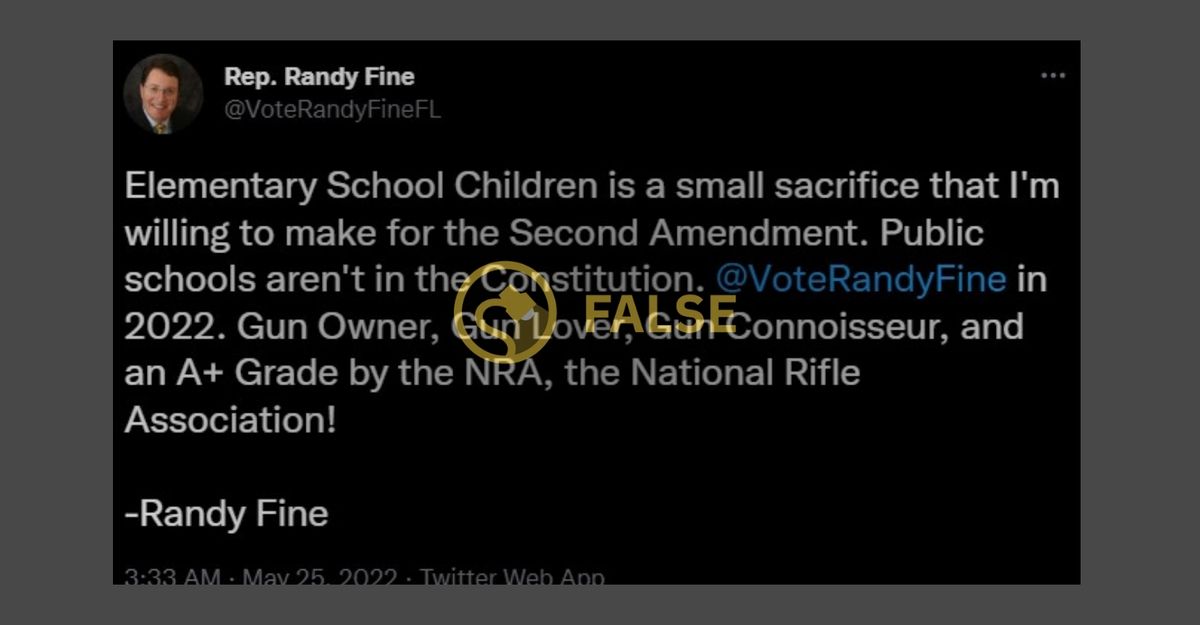 In the days following a deadly mass shooting at an elementary school in Uvalde, Texas, a screenshot supposedly showing a tweet from Florida House Rep. Randy Fine in which he said he was willing to "sacrifice" children in order to preserve the Second Amendment was widely circulated on social media.

"Elementary school children is a small sacrifice that I'm willing to make for the Second Amendment. Public schools aren't in the Constitution. @VoteRandyFine in 2022. Gun owner, Gun Lover, Gon Connoisseur, and an A+ Grade by the NRA, the National Rifle Association. While the "sacrifice school children" tweet was fake, the Florida politician caused controversy at around the same time with a genuine tweet. With Democrats increasing their calls for gun control measures in the days after 19 children were killed in the Texas school shooting, Fine wrote on Twitter that if U.S. President Biden tried to "take our guns" he'd "learn why the Second Amendment was written in the first place."

While many people saw Fine's tweet as a threat to the president, Fine later said that his message wasn't meant as a threat but as a warning from history.

Previous Article
Next Article
Article 4 of 10 in Collection

“What We Know about the Victims of the School Shooting in Texas.” Washington Post, 25 May 2022, https://www.washingtonpost.com/nation/2022/05/25/uvalde-texas-school-shooting-victims/.