Was Rand Paul Certified as an Ophthalmologist by a Board He Created?

The Kentucky senator’s medical qualifications came under a microscope in a meme. 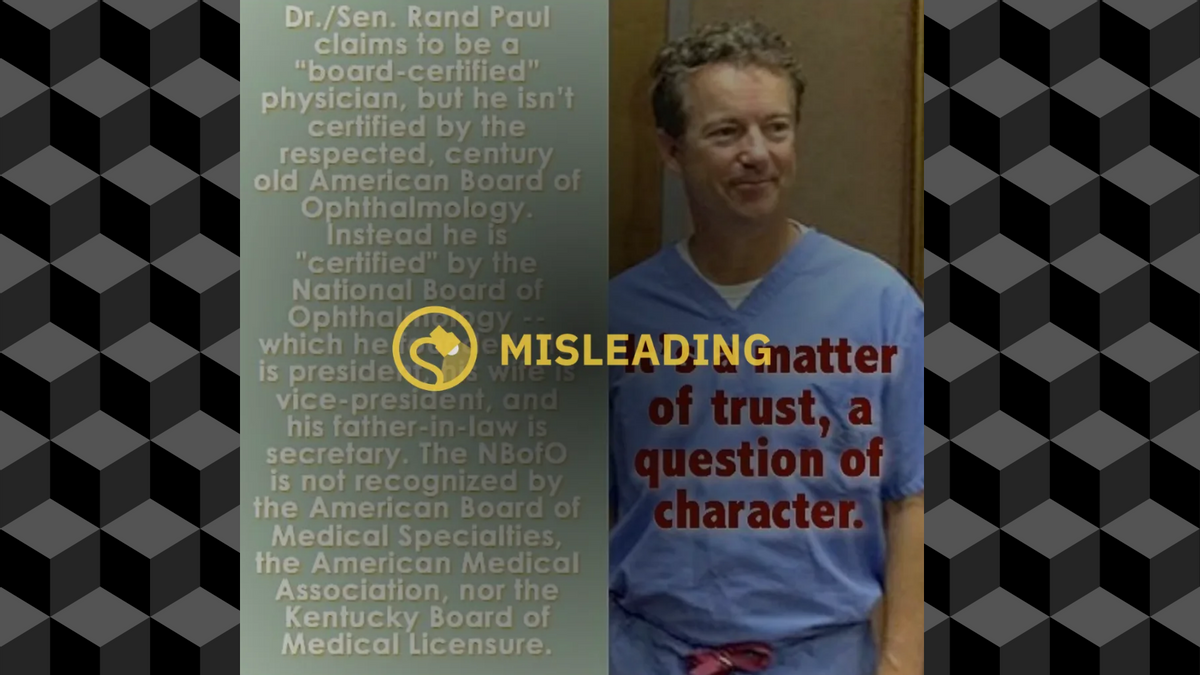 Claim:
U.S. Sen. Rand Paul claimed to be a "board-certified" ophthalmologist on the basis of being certified by a board that he created himself and that he put his wife and father-in-law in charge of.
Rating:

Although Rand was advertised as "board-certified" until at least 2013, it is unknown if he continued to present himself as such after that.

As U.S. Sen. Rand Paul of Kentucky continued to defend unsubstantiated claims of fraud in the 2020 presidential elections, and often appeared mask-less during the COVID-19 pandemic, a meme spread about his past qualifications as an ophthalmologist.

Snopes readers shared this with us and asked if the claims in it were true. We learned that in general they were, with some complicated elements. The text of the meme read as follows:

Dr./Sen. Rand Paul claims to be a "board certified physician, but he isn't certified by the respected, century old American Board of Ophthalmology. Instead he is "certified" by the National Board of Ophthalmology -- which he founded. He is president, his wife is vice-president, and his father-in-law is secretary. The NBofO is not recognized by the American Board of Medical Specialties, the American Medical Association, nor the Kentucky Board of Medical Licensure.

Paul is a trained ophthalmologist who has been practicing since 1993 in Bowling Green, Kentucky. In 2010, reports emerged that Paul was not certified by a board for his specialty, at least according to the national clearinghouse for such certifications. As it turned out, Paul was board-certified initially by the American Board of Ophthalmologists (ABO) until 2005 and until 2011 by a board he founded himself in 1999, according to his own admission.

In a 2010 statement to Politico, Paul described how his certification saga was his battle against a “hypocritical power play that I despise.” Paul basically protested against the ABO's decision to require recertifications of medical licenses every 10 years for anyone who was board-certified after 1992. He fell in that group, found the decision to be “discriminatory,” and took it upon himself to set up the National Board of Ophthalmologists (NBO). Paul was board-certified for around 10 years by the ABO until letting it lapse in 2005. He said:

I took the American Board of Ophthalmology (the largest governing body in ophthalmology) boards in 1995, passed them on my first attempt (as well as three times during residency), and was therefore board-certified under this organization for a decade.

I thought this was hypocritical and unjust for the older ophthalmologists to exempt themselves from the recertification exam.

In my protest to the American Board, I asked, "If the ABO thinks that quality of care would be improved by board testing every decade, shouldn't this apply to all doctors, not just those of a certain age? In fact, many of us argue that the older ophthalmologists need recertification even more since they are more distant from their training.
[...]
This is the kind of hypocritical power play that I despise and have always fought against.

The NBO was officially incorporated in 1999, according to the Kentucky Secretary of State’s website. The organization lasted more than a decade, board-certified 50 to 60 doctors, and was never recognized by the medical establishment.

Kentucky doesn't require board certification for medical licensure, so Paul is still licensed to perform surgeries in the state, and he does. According to the American Medical Association, "While every physician must be licensed to practice medicine, board certification is a voluntary process. Medical licensure sets the minimum competency requirements to diagnose and treat patients and is not specialty specific. Board certification, however, demonstrates a physician’s “exceptional expertise in a particular specialty and/or subspecialty of medical practice,” according to the American Board of Medical Specialties."

In 2013, The Washington Post asked Michael S. Rodman, executive director of the Kentucky Board of Medical Licensure, how the NBO fit into Kentucky law. “The Kentucky Board of Medical Licensure does not license physicians based on their specialty board certification nor is it a requirement for licensure,” he said. However, the “Board does address specialty board certification through our regulation on physician advertising.” He confirmed that if a board is not on his group's list, a physician cannot advertise as being board-certified. NBO was not on the list.

According to the Kentucky Secretary of State’s website, Paul’s family members did make up the NBO’s leadership. He was the president, his wife, Kelley Paul, was vice president and director, and Hilton Ashby, his father-in-law, was secretary. In 2010, TPMmuckraker reached out to Ashby to learn more about his involvement in the board, and he said, “I can’t tell you what the organization does.” When he was informed that he was listed as the group’s secretary, he said: “I was at one time involved as a secretary on something. But I don’t know whether it was about that specifically or not.” Paul’s wife also declined to comment for the Courier-Journal report, saying, “I’m not involved in that. I’m not officially talking about that today.” Neither of them are medical professionals.

NBO’s board was dissolved by the state in 2000 after Paul missed a filing deadline, and though he kept it running, it remained legally unrecognized. He restarted the board officially in 2005 and filed annual reports until 2010, and the NBO was dissolved again by Kentucky in 2011. Its current standing is ranked as “Bad” on the Secretary of State’s site.

In 2013, The Washington Post wrote that Paul continued to present himself as “board-certified” even though the NBO had been out of business since 2011. His profile on the website of the TriStar Greenview Regional Hospital, said “Specialty Board Certifications: Ophthalmology" in 2013, though it appears to have been removed since then. And on the Healthgrades website, Paul's physician entry once read "Ophthalmology, Board Certified,” though he does not appear to have an entry anymore. The same report said that Paul had not been certified by any board recognized by the state of Kentucky since 2005 and since 2011 had no board certification since his organization was dissolved. Paul has, however, tweeted about volunteering at the TriStar Greenview Regional hospital during the COVID-19 pandemic. A representative for the hospital did not respond to our questions about the way Paul was presented on their website in 2013, but directed us back to the "active physicians" listed on it, and Paul is no longer there.

We have reached out to Healthgrades, and will update this post if we receive more information.

Based on his Senate website, Paul says he "currently performs pro-bono eye surgeries for patients across Kentucky. Additionally, he provides free eye surgery to children from around the world." We have been unable to find recent examples of Paul presenting himself as "board-certified," beyond the 2013 Washington Post report.

We reached out to Paul's office to get their response on the above reports and will update this piece if we receive more information.

Given the public records describing the state of the NBO, Paul's own statements, his board certification by the ABO until 2005, and the lack of information around how he presents himself today, we rate this claim as a “Mixture.”