Despite modern religious legends, candy canes were not created as Christian symbols representing the blood and purity of Jesus. 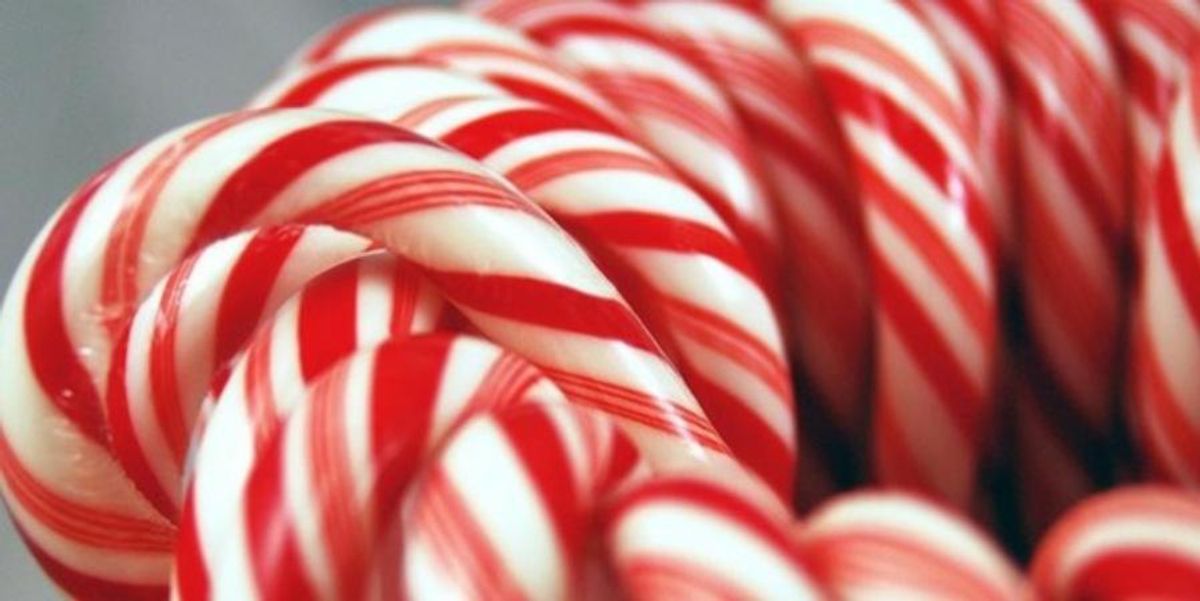 Claim:
Candy canes were created as Christian symbols representing the blood and purity of Jesus.
Rating:

The peppermint-flavored, red-and-white-striped sugary candy cane can be found everywhere at Christmastime. It's as much an ornament as it is a confection, and people munch these treats and decorate with them, scarcely giving a thought to just where candy canes came from in the first place. In recent years several different stories have been advanced claiming that the candy cane was designed to be fraught with Christian religious symbolism, variously offering it as a secret form of identification used by European Christians during a time of persecution, a sweet treat created to induce children to behave well in church, or a confection dreamed up by a candymaker in Indiana to express his Christian faith:

A candymaker in Indiana wanted to make a candy that would be a witness, so he made the Christmas Candy Cane. He incorporated several symbols from the birth, ministry, and death of Jesus Christ.

He began with a stick of pure white, hard candy. White to symbolize the Virgin Birth and the sinless nature of Jesus, and hard to symbolize the Solid Rock, the foundation of the Church, and firmness of the promises of God.

The candymaker made the candy in the form of a "J" to represent the precious name of Jesus, who came to earth as our Savior. It could also represent the staff of the "Good Shepherd" with which He reaches down into the ditches of the world to lift out the fallen lambs who, like all sheep, have gone astray.

Thinking that the candy was somewhat plain, the candymaker stained it with red stripes. He used three small stripes to show the stripes of the scourging Jesus received by which we are healed. The large red stripe was for the blood shed by Christ on the cross so that we could have the promise of eternal life.

Unfortunately, the candy became known as a Candy Cane — a meaningless decoration seen at Christmas time. But the meaning is still there for those who "have eyes to see and ears to hear." Every time you see a Candy Cane, remember the Wonder of Jesus and His Great Love that came down at Christmas, and that His Love remains the ultimate and dominant force in the universe today.

Advent Day 11: The color white of the candy cane represents the #purity of the Virgin Mary and Jesus. #RethinkAdvent #RethinkChurch #inumc pic.twitter.com/lXMJYsDpak

The Candy Cane Legend: A Simple Craft to Share Jesus with Others https://t.co/CWq71hF7SV pic.twitter.com/Db5ywr4Pjj

An upside down candy cane makes a J to remind us of Jesus. #25Ornaments pic.twitter.com/RY9554ByAi

The first of these claims — that the candy cane was intended as a means by which persecuted Christians could furtively identify each other — is directly contradicted by history. Even questionable accounts regarding the origins of the candy cane place its origins no earlier the latter part of the 17th century, at which time Europe was almost entirely Christian. By then, only people who were not Christians would have been the ones in need of this form of "secret handshake"! Like the apocryphal tale of the "true" meaning of the song "The Twelve Days of Christmas," this claim is a modern day attempt to infuse a primarily secular holiday artifact with Christian origins and meanings.

Another popular account claims a choirmaster in Cologne, Germany, as the inventor of the candy cane:

Church history records that in 1670 the choirmaster at Germany's Cologne Cathedral was faced with a problem that still challenges parents, teachers, and choir directors today. In ancient Cologne, as well as in thousands of churches today, the children in the choir often grew restless and noisy during the long services. He sought out a local candy maker, and after looking over the treats in his shop, the music leader paused in front of some white sweet sticks. Yet the choirmaster wondered if the priests and parents would allow him to give the children in his choir candy to eat during a church service. The choirmaster asked the candy maker if he could bend the sticks and make a crook at the top of each one. The candy would not be just a treat; it would be a teaching tool. The choirmaster decided that the candy's pure white color would represent the purity of Christ. The crook would serve as a way for the children to remember the story of the shepherds who came to visit the baby Jesus. The shepherds carried staffs or canes, and with the hook at the top of the stick, the candy now looked like a cane."

However, this account also presents significant historical problems. Despite the authoritative-sounding appeal to "church history," no one has yet produced any documentation that either verifies this account as true or reliably dates it to the 17th century — it exists only in the form of anecdote, recorded no earlier than the mid-20th century. Moreover, English-language references to "candy canes" (1866) and their association with Christmas (1874) didn't begin to pop up until the latter part of the 19th century, two hundred years after the treat had supposedly been invented and popularized as a Christmastime confection.

The claim that candy canes were created by "a candymaker in Indiana" who "stained them with red stripes to show the stripes of the scourging Jesus received" is similarly lacking in documentation and historically problematic. (One has to wonder how it is we supposedly know that one specific person invented the candy cane, we know where he lived, and we know precisely why he made candy canes the way he did, yet no one even knows his name.) The existence of candy sugar sticks with colored stripes has been documented at least as far back as 1844, but visual evidence of the J-shaped, white-with-a-red-stripe modern candy cane did not appear until the beginning of the 20th century: Christmas cards produced before 1900 show plain white canes, but striped canes only started to appear on Christmas cards at the beginning of the 20th century: The strongest connection one might make between the origins of the candy cane and any intentional Christian association is to guess that possibly some unknown person, at some indefinite time, took a long-existing form of sweet (i.e., straight white sticks of sugar candy) that was already associated with Christmas and produced bent versions of it to represent a shepherd's crook and/or make it easier to hang on Christmas trees, but even that general association is nothing more than mere supposition with no supporting evidence behind it.

One verifiable (albeit indirect) religious connection associated with the modern candy cane exists, however.

In 1919 Bob McCormack began making candy canes for local use and sales in Albany, Georgia, and by the middle of the century his company (originally the Famous Candy Company, then the Mills-McCormack Candy Company, and later Bobs Candies) had become one of the world's leading candy cane producers. But candy cane manufacturing initially required a fair bit of labor that limited production quantities (the canes had to be bent manually as they came off the assembly line in order to create their 'J' shape,) and it was McCormack's brother-in-law, a Catholic priest named Gregory Harding Keller, who came up with the solution: Father Keller invented the Keller Machine that automated the process of shaping straight candy sticks into candy canes.

Claims made about the candy's Christian symbolism have become increasingly widespread as religious leaders have assured their congregations that these mythologies are factual, the press have published these claims as authoritative answers to readers' inquiries about the confection's meaning, and several lavishly illustrated books purport to tell the "true story" of the candy cane's origins. This is charming folklore, but one should not lose sight of the fact that such stories of the candy cane's origins are, like Santa Claus, myths and not "true stories."