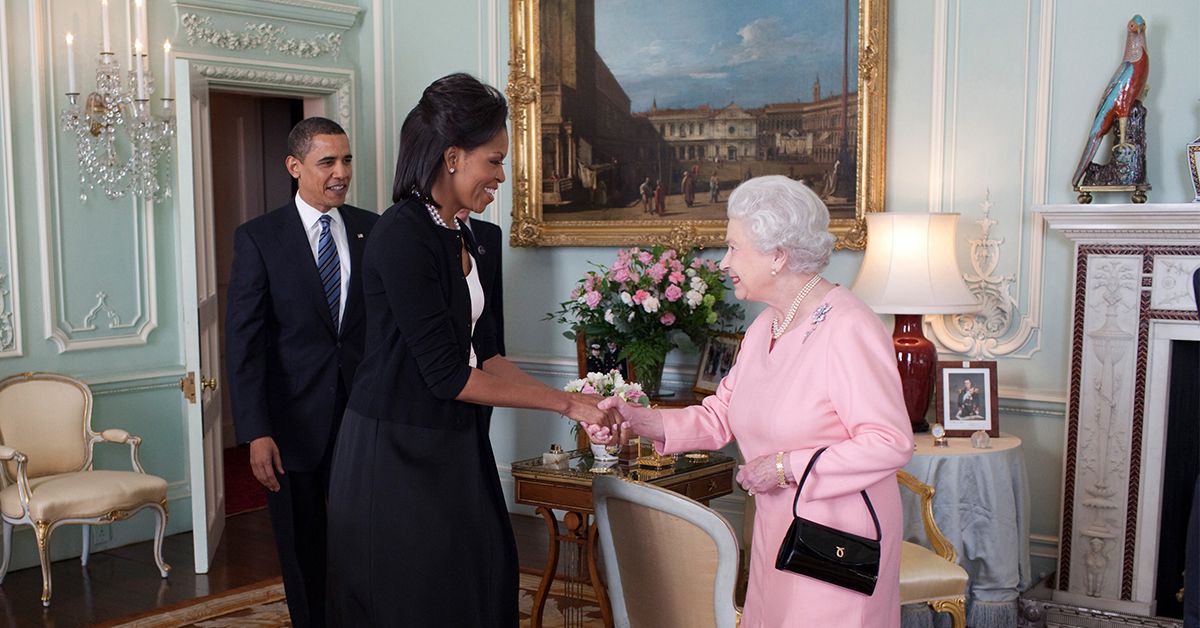 Claim:
Queen Elizabeth removed the Obamas from the guest list for Prince Harry and Meghan Markle's wedding after she learned that Michelle Obama tried to "sneak a spot."
Rating:

The official guest list for the royal wedding of Britain's Prince Harry and Meghan Markle had not been released as of early December 2017, but that didn't stop disreputable web sites from inventing politically-charged stories about who would and wouldn't be invited.

The pro-Trump fake news site Just News USA reported on 3 December 2017 that despite "kissing up" to the royal family and trying to "sneak" an invitation to Harry's wedding, former United States President and First Lady Barack and Michelle Obama had been "personally removed" from the guest list by Queen Elizabeth:

For eight years, Michelle Obama genuinely thought she was a queen and expected to be treated like one. Now that she’s a regular citizen, she’s having a hard time of letting go of her former status as the (failed) first lady and keeps trying to push her way into every major social scene where she doesn’t belong and is apparently not invited.

When she heard the news that Prince Harry was marrying a black American girl, she assumed it was her place to be on that guest list, which has to be approved by the Queen of England herself. Michelle made a desperation move to sneak a spot on that exclusive guest list and as soon as the real queen found out what the wannabe royalty did, she delivered a brutal beatdown that was definitely deserved.

Several other sites, including the consistently unreliable YourNewsWire.com, published slightly rearranged versions of the same article. For example:

Invitations to Royal weddings in England have traditionally been extended to the sitting President of the United States and the current First Lady, so when Queen Elizabeth saw what Michelle Obama was up to – trying to sneak a spot at the wedding at the expense of the real POTUS and FLOTUS – she delivered Michelle a well-deserved and humiliating beatdown.

While Barack Obama has been traveling around the world, operating as some kind of shadow president and attempting to undermine the real POTUS, Michelle has been trying to push her way into every major social event where she doesn’t belong and is apparently not invited.

When Michelle Obama heard the news that Prince Harry was marrying a black American girl, she assumed it was her rightful place to be on that guest list. Michelle made a desperate move to sneak a spot on the guest list, but unfortunately for the former First Lady, the guest list has to be approved by the Queen of England herself.

There was no basis in fact for any of these claims. As of 30 November (just a few days before these reports began appearing), word from Kensington Palace was that the guest list was still "in the early stages of being compiled," according to the Telegraph, and the royal betrothed would have "primary input" into who would be on that list. No mainstream news sources in England or anywhere else reported that the Obamas were on the outs with Queen Elizabeth, nor that the queen intended to disinvite them or other potential wedding guests.

As a matter of fact, if anyone were likely to be disinvited, it would probably have been President Trump, judging from the Telegraph's report, for two reasons: one, because it would go against the established precedent, which is not to invite sitting U.S. presidents to British royal weddings; and two, because bride-to-be Meghan Markle, who is an American, is not a big fan of Trump, whom she has called "misogynistic" and "divisive."

The Obamas, on the other hand, have enjoyed a comparatively warm relationship with the royal family ever since 2009, when the then-First Lady broke with protocol and hugged the queen during their first meeting. Barack Obama was seen hanging out with groom-to-be Prince Harry as recently as May 2017:

A 27 November 2017 article in Newsweek told a story very different from what would be reported by Just News USA and other fake news sites days later:

The guest list hasn’t been set for the royal wedding of Prince Harry and Meghan Markle, but a number of things could stand in the way of President Donald Trump getting an invite.

But a former U.S. president might make the list, due to his friendship with the young British royal: Barack Obama and his wife, former first lady Michelle, who appear to have amiable relations with Harry and his elder brother and future king, Prince William, the Duke of Cambridge.

In the end, neither President Trump nor President Obama was invited, for reasons explained by the Palace:

Kensington Palace announced that the royal couple would not be inviting political leaders to the event, at least not on the basis of their official position. Which means neither US President Donald Trump nor his predecessor Barack Obama will be there. Not even British Prime Minister Theresa May was deemed worthy of a place on the guest list.

Instead, only personal friends of the couple will be inside Windsor Castle for the royal event of the year on May 19.

"It has been decided that an official list of political leaders -- both UK and international -- is not required for Prince Harry and Ms. Markle's wedding," a Kensington Palace spokesman said. "Her Majesty's Government was consulted on this decision, which was taken by the royal household."

A White House official confirmed neither Trump nor first lady Melania were invited; nor was Prime Minister May, Downing Street said.

A royal source said that while Harry and Meghan hoped to see Barack and Michelle Obama soon, the former US President and his wife would not be at the wedding. The source would not say definitively whether the Obamas -- who are close to the royal couple -- had been invited.

Unlike the wedding of the Duke and Duchess of Cambridge in 2011, this royal wedding is not an official state occasion and is regarded as a private ceremony, so there is no onus on the couple to invite political leaders.

Lanktree, Graham.  "Obama, Not Donald Trump, May Be Invited to Royal Wedding of Prince Harry and Meghan Markle."   Newsweek.  27 November 2017.

Roberts, Dan.  "The Obamas and the Royals: Bond with Monarchy Covers Up Political Cracks."   The Guardian.  21 April 2016.

Wright, Mike.  "Will Donald Trump Get an Invite to Prince Harry and Meghan Markle's Wedding?"   The Telegraph.  30 November 2017.