Did the Queen Call President Trump an 'Amazing Person' with a 'Good Heart'?

Buckingham Palace has confirmed Elizabeth II did not give a June 2019 interview which was subsequently suppressed by politically motivated journalists. 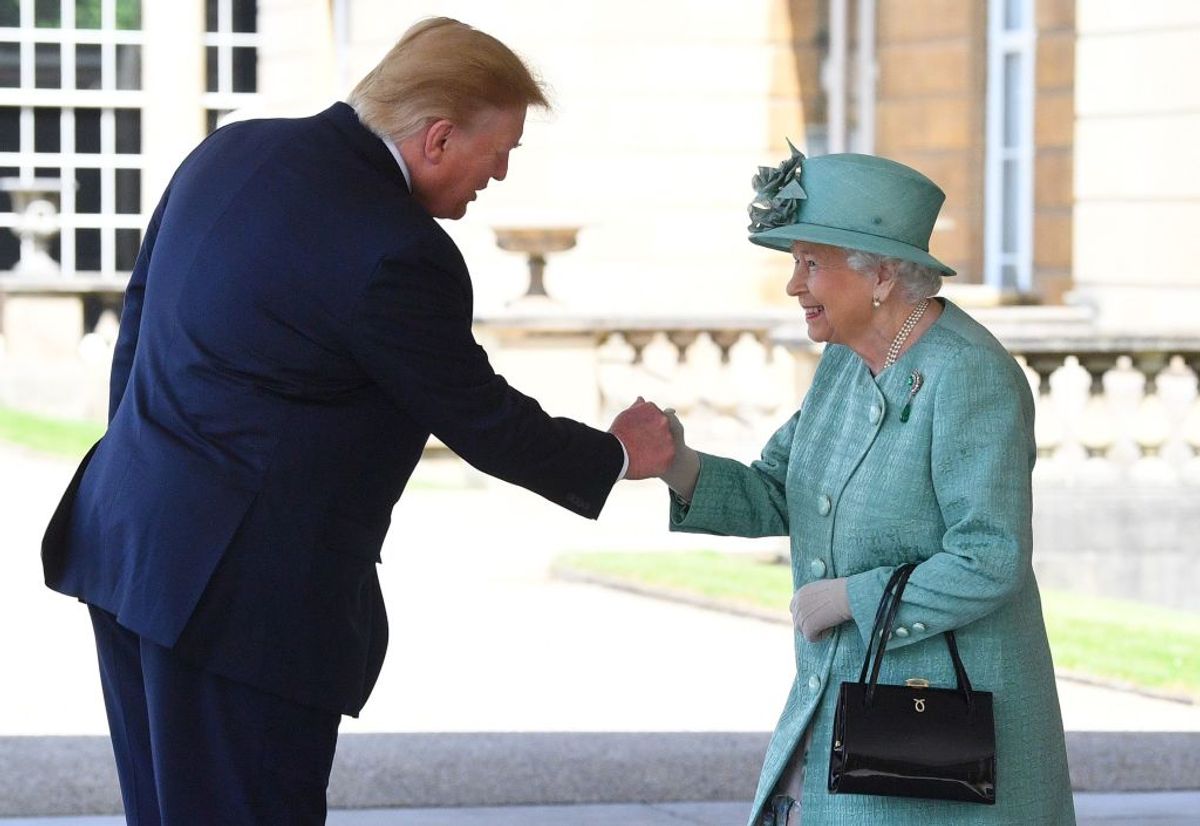 In the aftermath of U.S. President Donald Trump's state visit to the U.K., France, and Ireland in June 2019, some of his supporters began sharing a meme that appeared to contain glowing praise for the 45th president, provided by none other than Queen Elizabeth II.

The meme contained a photograph of Trump and Her Majesty sitting next to one another, along with the following quotation:

"'He's really just an amazing person. So thoughtful, you know. We've had some private talks and he is very genuine. I have a sense about people, and the president has a good heart. In another life, he could be my son'": The "In Trump We Trust" Facebook page provided the following additional context for the purported quotation: "UK reporter says executives scrapped [an] entire interview with Queen Elizabeth after she repeatedly praised President Trump." That post was removed on 7 June, but an archived version can be viewed here.

On 4 June, the right-leaning, conspiracy-theory website "Clover Chronicle" published a post similarly asserting that: "A staffer at an unnamed MSM [mainstream media] news outlet in the United Kingdom is claiming they were recently involved in an interview with Queen Elizabeth II where she unexpectedly complimented U.S. President Donald Trump. The alleged insider said executives at the organization are 'fuming' because they couldn’t salvage the piece due to her relentless praise of the POTUS."

Those claims originated with a 4 June post on the notorious /pol/ section of the online forum 4chan, a frequent source of hyper-partisan misinformation. There, an anonymous member wrote:

Was just involved in an exclusive interview with the Queen, but the execs at my company decided not to air it because she praised Trump so fucking much. It was literally impossible to edit and not make it look like total garbage. The brass are fuming, /pol/. It's as if she said fuck it and just spoke her mind. It was AMAZING. Here's just one of the questions/answers between her and the reporter-

Q: Many are wondering about your relationship with President Trump? Can you tell us a bit about it?
A: He's really just an amazing person. So thoughtful, you know. We've had some private talks and he is very genuine. I have a sense about people, and the President has a good heart. In another life, he could be my son.

After that, everyone was absolutely flabbergasted. I could tell it was hard for the interviewer to go on and follow the script, but he/she did nonetheless.

There was no factual basis to this story, and the remarks attributed to Elizabeth were fabricated. A spokesperson for Buckingham Palace confirmed as much to Snopes, writing in an email: "Her Majesty The Queen does not give interviews, and did not give an interview."

The Clover Chronicle.  "Insider: Queen Elizabeth Praised Trump in Now-Deleted Interview, Called Him an 'Amazing Person' With a 'Good Heart' and Said 'In Another Life, He Could Be My Son.'"     4 June 2019.