Does 'Quarantine' Originate from the Word 'Forty' (Days) in Italian?

A "quarantine" separates and restricts the movement of people who were exposed to a contagious disease to see if they become sick. 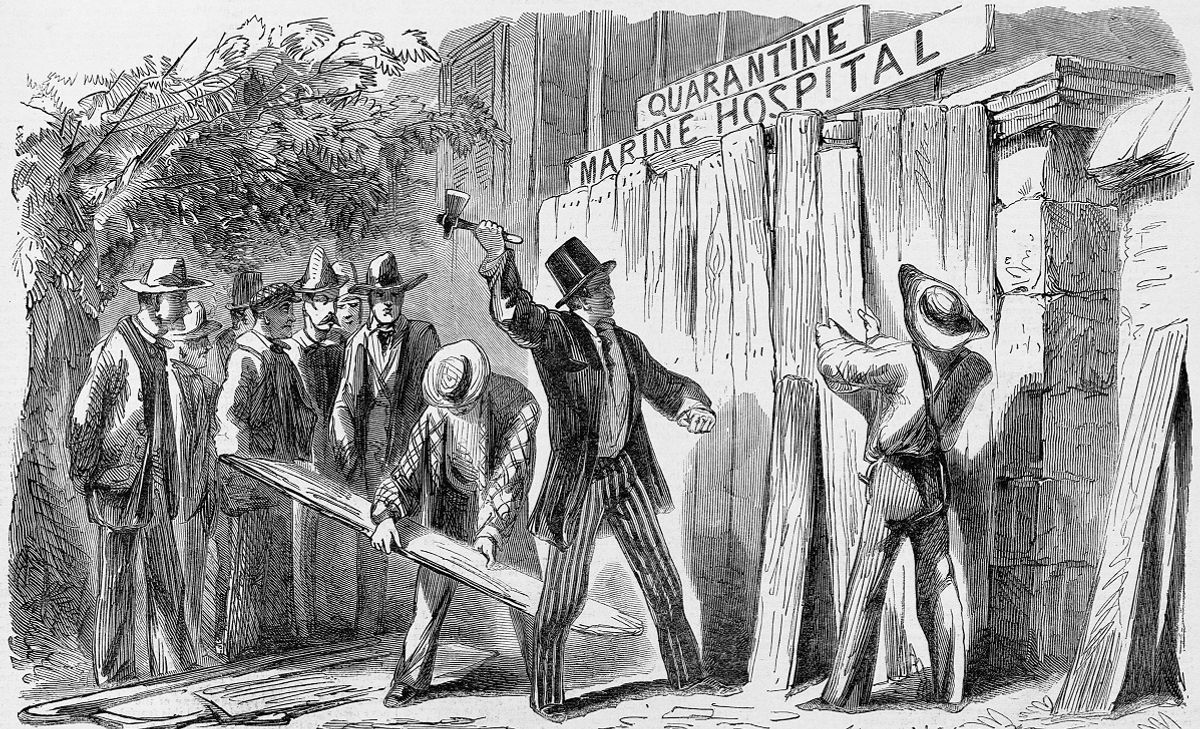 An illustration from an 1855 edition of Frank Leslie's Illustrated Newspaper. (Photo by © CORBIS/Corbis via Getty Images)
Previous Article
Next Article
Article 9 of 21 in Collection

Claim:
The word "quarantine" stems from the Italian word for "forty," representing the number of days persons potentially exposed to communicable diseases had to remain in isolation.
Rating:

During the COVID-19 coronavirus disease pandemic of 2020, many Americans first became acquainted with the phrase "social distancing," a term referring to the practice of people avoiding gathering in groups and maintaining physical space between themselves in public settings (in order to prevent the spread of COVID-19). The words "isolation" and "quarantine" also saw an increase in usage during the pandemic, but although they are often used synonymously, they have distinctly different meanings, as the Centers for Disease Control and Prevention (CDC) explained on its website:

Isolation separates sick people with a contagious disease from people who are not sick.

Quarantine separates and restricts the movement of people who were exposed to a contagious disease to see if they become sick.

Thus, persons who have contracted COVID-19 and are staying at home in order to avoid spreading the illness to others are properly said to be self-isolating rather than self-quarantining.

Nonetheless, the common use of "quarantine" during the pandemic got some people wondering where that word came from, a question one meme attempted to answer: The explanation offered in this meme is largely correct, although in its brevity it omits some of the more interesting etymological background.

The roots of "quarantine" lay in the multiple outbreaks of bubonic plague (popularly known as the "Black Death") that hit Europe beginning in 1347 and killed an estimated one-third of the population. According to a 2002 article published in the journal Clinical Infectious Diseases, city officials around the Mediterranean seaport of Ragusa mandated in 1377 that persons who sought to enter the city after traveling from plague areas must first remain in isolation for a 30-day period known as a "trentino" (from the Italian word "trenta," meaning "thirty"):

Beginning in middle of the 14th century, repeated waves of plague swept across Europe. After arriving in southern Europe in 1347, plague spread rapidly, reaching England, Germany, and Russia by 1350. During this time, it is estimated that one-third of Europe's population died. The profound impact of the epidemic led to the institution of extreme infection-control measures. For example, in 1374, Viscount Bernabo of Reggio, Italy, declared that every person with plague be taken out of the city into the fields, there to die or to recover.

A similar strategy was used in the busy Mediterranean seaport of Ragusa (modern Dubrovnik, Croatia). After a visitation of the black death, the city's chief physician, Jacob of Padua, advised establishing a place outside the city walls for treatment of ill townspeople and outsiders who came to town seeking a cure. The impetus for these recommendations was an early contagion theory, which promoted separation of healthy persons from those who were sick. Unfortunately, these measures proved to be only modestly effective and prompted the Great Council of the City to pursue more radical steps to prevent spread of the epidemic.

In 1377, the Great Council passed a law establishing a trentino, or thirty-day isolation period. The 4 tenets of this law were as follows: (1) that citizens or visitors from plague-endemic areas would not be admitted into Ragusa until they had first remained in isolation for 1 month; (2) that no person from Ragusa was permitted go to the isolation area, under penalty of remaining there for 30 days; (3) that persons not assigned by the Great Council to care for those being quarantined were not permitted to bring food to isolated persons, under penalty of remaining with them for 1 month; and (4) that whoever did not observe these regulations would be fined and subjected to isolation for 1 month.

Over the next several decades, other European cities adopted similar measures, and eventually the isolation period was extended from 30 days to 40 days, called a "quarantino" (from the Italian word "quaranta," meaning "forty"). Why the isolation period increased to 40 days is unknown, and several different theories have been advanced to explain it:

Some authors suggest that it was changed because the shorter period was insufficient to prevent disease spread. Others believe that the change was related to the Christian observance of Lent, a 40-day period of spiritual purification. Still others believe that the 40-day period was adopted to reflect the duration of other biblical events, such as the great flood, Moses' stay on Mt. Sinai, or Jesus' stay in the wilderness. Perhaps the imposition of 40 days of isolation was derived from the ancient Greek doctrine of “critical days,” which held that contagious disease will develop within 40 days after exposure. Although the underlying rationale for changing the duration of isolation may never be known, the fundamental concept embodied in the quarantino has survived and is the basis for the modern practice of quarantine.

Previous Article
Next Article
Article 9 of 21 in Collection