Did Putin's Legs Buckle During a Ceremony Due to Cancer or Parkinson's Disease?

We received reader mail that asked us to look at a video clip that purportedly showed Putin unsteady on his feet during an awards ceremony. 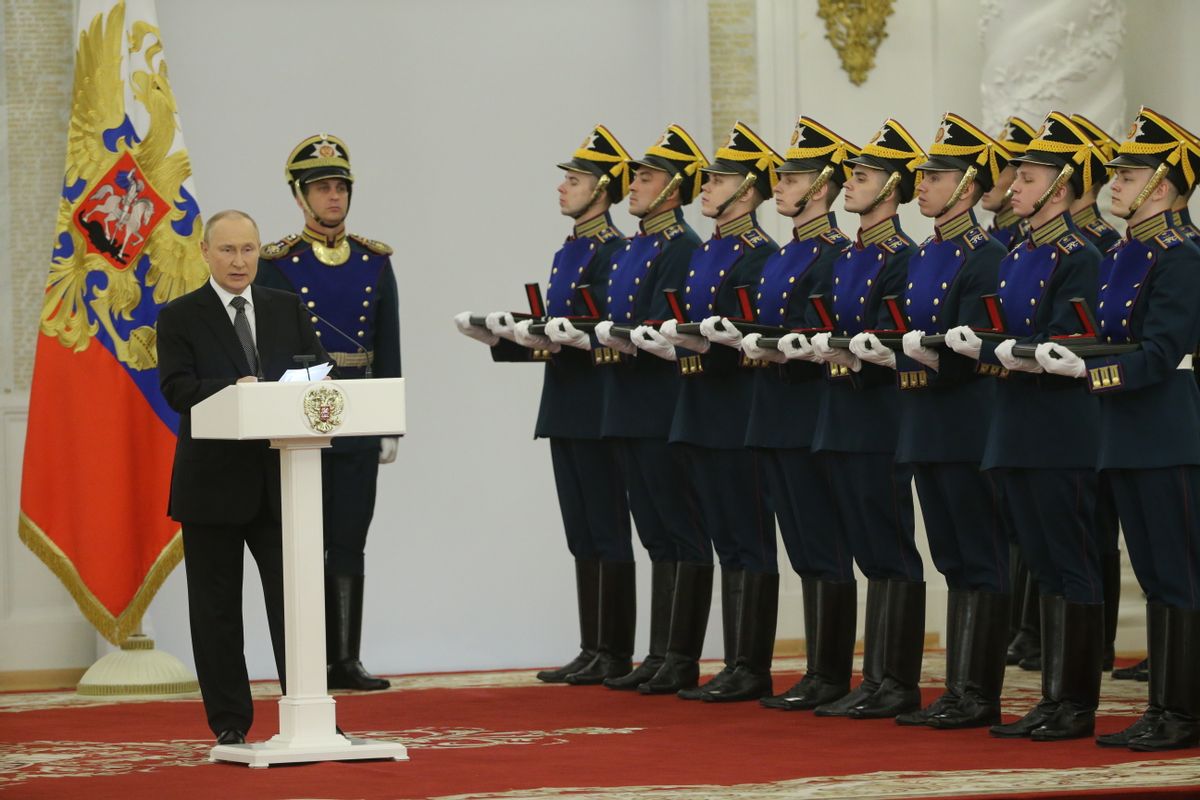 Claim:
A video recorded on June 12, 2022, shows Russian President Vladimir Putin's legs buckling during a ceremony either because he had terminal cancer or Parkinson's disease.
Rating:

On June 13, 2022, rumors began to spread online that claimed a video showed Russian President Vladimir Putin's legs buckling under him as he participated in an awards ceremony, purportedly because he had been diagnosed either with terminal cancer or Parkinson's disease. One important component lacking from the claims was solid evidence or an official announcement that would definitively confirm that Putin had such a disease. Without evidence, these claims were nothing more than unverified rumors.

The video made the rounds with the unsubstantiated rumors at a time when Russia's invasion of Ukraine was in its fourth month. As for the rumors themselves, BBC previously reported that Russian Foreign Minister Sergei Lavrov had "denied speculation" that Putin was ill.

One of our readers sent in a specific video that came from a YouTube channel named "Trending news." The video's title read, "PUTIN was 'Appear' in the last days of his life, medical services came in when he was unsteady."

Another video that appeared to have been captured after the ceremony ended showed Putin standing with other attendees while having a drink. The man pictured on the left with the mustache is Nikita Mikhalkov, a filmmaker who was one of the recipients of an award. This video from a discussion following the event stands somewhat in opposition to the idea that Putin had received "medical services" while he was "unsteady":

The event seen in the video was identified as the State Awarding Ceremony at the Grand Kremlin Palace in Moscow, which took place on June 12, also known as Russia Day.

A longer video from the same ceremony showed Putin entering the room and standing for quite a long time. None of the 59 photographs from the event hosted by Getty Images showed Putin sitting, which may have indicated that he stood for the duration of the ceremony.

During Mikhalkov's speech, Putin stood by his side. One of the main moments highlighted in some of the clips from the ceremony was when Putin's legs could be seen moving between 0:29 and 0:39 in the following video:

If Putin stood for the entirety of the event, which lasted an unknown amount of time, it's possible that he may have been making sure to not lock his knees. The act of locking one's knees during any kind of ceremony, such as a wedding, has resulted in a seemingly countless number of YouTube videos of people fainting. It's unclear if Putin was simply attempting to shift around to avoid blacking out. However, this was perhaps the most reasonable explanation.

The U.K. tabloid Metro provided coverage of the rumors, reporting with the headline, "Putin looks unsteady on his feet at awards ceremony":

Fears about the Russian leader’s mental and physical wellbeing have come into sharp focus since he invaded Ukraine nearly four months ago.

There is speculation he is suffering from terminal cancer or Parkinson’s following reports of trembling hands and mysterious disappearances.

A video has now emerged from an awards ceremony on Sunday showing the tyrant’s shaky legs.

The article presented no conclusive evidence that would support the unverified rumors.

In sum, there's no evidence that Putin's legs were shaking or buckling at the June 2022 ceremony due to terminal cancer, Parkinson's disease, or any other illness.

For further reading, we previously reported the same "unproven" verdict about a similar rumor that claimed Putin was going to hand over power temporarily since he was scheduled to undergo cancer surgery.

Note: At the time that this story was written, Google Trends showed that readers also appeared to be searching Google to find out about Putin's health, particularly if he was in a coma. However, Putin had just appeared at the awards ceremony two days prior to our finding of the coma rumor. There's zero evidence that Putin was in a coma.

statonv. “Don’t Lock Your Knees during Your Fitting! Or at the Alter!” The Knot Community, Mar. 2014, https://forums.theknot.com/discussion/1014305/dont-lock-your-knees-during-your-fitting-or-at-the-alter.