This is likely the first time that deepfake videos have been created and deployed in a war propaganda effort. 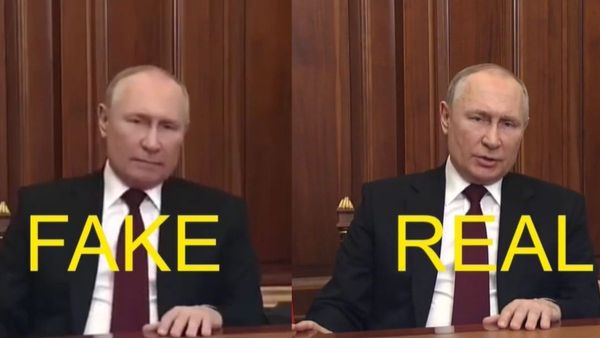 What Is This Article? The internet is full of a seemingly endless number of rumors. This article is simply that: a rumor. While Snopes.com and its small staff do research content for many completed fact checks, news, and other articles every week, we also gather individual rumors as a way of archiving claims on the internet. If you would like to help contribute to our reporting efforts so that we can tackle more of these stories in the future, feel free to send your support. To submit information that might help shed light on answers for this rumor, please contact us.

In March 2022, as Russia's invasion of Ukraine entered its third week, a video was circulated on social media that supposedly showed Russian President Vladimir Putin announcing that the Russian military was surrendering and the war in Ukraine was over:

This is not a genuine video of Putin.

Reuters provided a partial translation of this deepfake video, writing:

In the video, Putin appears to say, "We've managed to reach peace with Ukraine” and goes on to announce the restoration of independence of Crimea as a republic inside Ukraine. A tweet sharing the video with a caption in Ukrainian reads in translation, “The President of the Russian Federation announced the surrender of Russia. Russian soldier, drop your weapons and go home while you're alive!”

Putin has made no such announcement and as of this writing, the country is still attacking Ukraine. On March 17, the day after this video was posted, Russia bombed a theater that was being used by Ukrainian civilians as a shelter.

The video was circulated on social media a few days after a poor deepfake of Ukrainian President Volodymyr Zelenskyy was shared online. Serhii Sternenko, the Twitter user above who shared this video, admitted in a follow-up tweet that this video was fake but said that it was "quality" work compared to the Zelenskyy fake.

Sternenko wrote (translated via Google and edited for clarity): "Learn, кацапи (a Ukrainian derogatory term for Russians), how to make [deepfakes]. This is a quality work, not the bullshit you [used] against Zelensky."

The above-displayed video was created by manipulating a real video of Putin that was originally posted by the Kremlin on Feb. 21. While Putin's movements in the edited video and the genuine video generally matched up, the edited version manipulated Putin's mouth to make it appear as if the fabricated audio was truly coming from the Russian president. This is most noticeable during portions of the video where the real Putin is silent and the fake Putin is speaking.

Here's a side-by-side comparison of the two videos.

Gregory told Euronews: "This is the first deepfake that we've seen used in an intentional and broadly deceptive way ... It's not an effective deepfake, partly because it's not an extremely well-made deepfake, but also because Ukraine has done a masterful job pre-bunking and then swiftly rebutting the video."

If you encounter a video or photograph online that seems suspicious, please let us know about it here.