While the initial posting of this bounty featured a "Dead or Alive" poster, it has since been removed from the post. 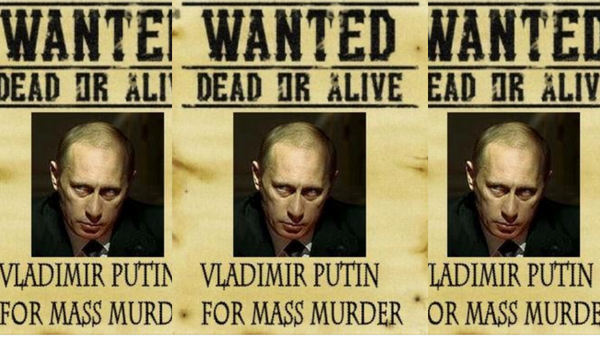 Russian entrepreneur Alex Konanykhin posted a message on social media offering a $1 million bounty for the arrest of Vladimir Putin. While the text of Konanykhin's message merely called for Putin's arrest, a since-deleted version featured Putin's face on a "Dead or Alive" poster, and many on social media referred to the message as a "bounty on Putin's head." Konanykhin says he was not promising to pay for Putin's assassination.

On March 1, 2022, a few days after Russia launched a full-scale attack on Ukraine, an image started circulating online that supposedly showed a message from a Russian entrepreneur who was offering a $1 million bounty "on Putin's head." This was a genuine message posted by Alex Konanykhin, a Russian entrepreneur currently living in the United States.

While it was genuine, it should be noted that Facebook reportedly removed the above post due to the "Dead or Alive" poster, which appeared to be calling for Putin's assassination. Konanykhin subsequently posted a new iteration of the message sans the "Dead or Alive" message.

Facebook banned my post; do you think it was a correct decision? I omit the picture as it was a "dead or alive" poster, but this is the text:

I promise to pay $1,000,000 to the officer(s) who, complying with their constitutional duty, arrest(s) Putin as a war criminal under Russian and international laws. Putin is not the Russian president as he came to power as the result of a special operation of blowing up apartment buildings in Russia, then violated the Constitution by eliminating free elections and murdering his opponents. As an ethnic Russian and a Russia citizen, I see it as my moral duty to facilitate the denazification of Russia. I will continue my assistance to Ukraine in its heroic efforts to withstand the onslaught of Putin's Orda.

After posts about a "bounty on Putin's head" went viral, Konanykhin shared another message on Facebook calling these reports incorrect. Konanykhin said that while the death of Putin would be cheered by millions of people around the world, he only meant to call for Putin to be "brought to justice."

"Some reports suggest that I promised to pay for the assassination of Putin. It is NOT correct. While such an outcome would be cheered by millions of people around the world, I believe that Putin must be brought to justice."

Did Putin Blow Up an Apartment Building?

Konanykhin's post refers to an incident in 1999 in which four apartment blocks in the Russian cities of Buynaksk, Moscow, and Volgodonsk were destroyed in a series of explosions. Russia blamed these explosions on Chechen militants, and the incident triggered the Second Chechen War. Some historians and journalists, however, have claimed that these bombings were coordinated by the Russian state in order to elevate Putin to the presidency.

One month after then-President Boris Yeltsin plucked a security agency official named Vladimir Putin from obscurity and made him prime minister, an explosion leveled a nine-story apartment building on Moscow’s outskirts.

The predawn blast on September 9, 1999, reduced the building to a smoking pile of rubble, killing more than 100. A second building, less than 6 kilometers away, was rocked by an explosion on September 13, killing 119.

“Yes, it’s one of Putin’s original sins,” said Sergei Kovalyov, a former lawmaker and rights activist who headed a commission that investigated the bombings in the early 2000s.

The bombings, and the fear they provoked, “were advantageous,” he told RFE/RL. “At the time, it was advantageous for him to take control of the country, and to introduce force into the Caucasus, in Chechnya in particular.”

Konanykhin was frequently described as a "Russian entrepreneur" in social media posts about his bounty on Putin. While this is true, he also has a complicated history with his home country. Konanykhin fled Russia in 1992, after being "hounded by the KGB," according to the Miami Herald, on embezzlement charges that were later dropped.

In the years after he fled his home country, multiple attempts were made by both the Russian and American government to have Konanykhin deported back to Russia. He was initially granted political asylum in 1999, but this was revoked in 2003, and Konanykhin was ordered to return to Russia. After a number of appeals, Konanykhin was granted asylum once again in 2007.