Rumor: Gel balls have been found in the Gerber brand of Puffs baby snacks.

Claim:   Gel balls have been found in the Gerber brand of Puffs baby snacks.

Please share.** PSA for Parents - watch out for Gerber puffs. A mom in
one of my parent groups found these balls in her daughter's puffs. She is
contacting Gerber but we also wanted to get the word out. You can see the
lot #, etc. in the photo. (I tried to share this yesterday but don't think
it was visible because of the OP's privacy settings, so trying again.) 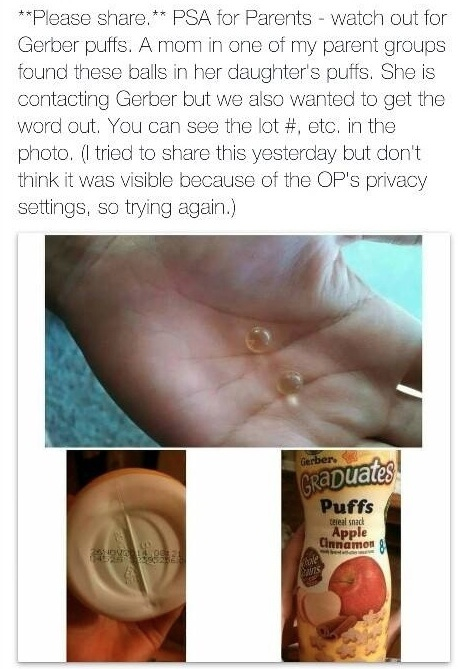 Origins:   On 2014, a Facebook user shared the above-reproduced status update and photograph regarding the Gerber brand of Puffs baby snacks. According to the poster, a woman with whom she was acquainted

(through an unspecified Facebook parenting group) had originally shared the photograph and warning, but the original post could not be directly re-shared because of the initial poster's privacy settings. The date of that initial post and the identity of its creator were unstated.

Since its first appearance in this Gerber Puffs warning (depicting Gerber Graduates Puffs in Apple Cinnamon flavor) spread steadily online, and some social media users have been left with the impression that multiple incidents of adulterated Gerber puffs have been reported (even though the rumor has primarily involved only the one example). Similar claims have appeared on different sites; and on (year unspecified), a user of the SmartMom forum reported that:

If your a parent that gives your baby Gerber puffs you might want to reconsider that, I gave Bayleigh Gerber puffs this morning and I noticed something wrong with them, there was little round clear balls in her Gerber puffs that looked like medicine but I wasn't for sure, I'm thinking it was [tylenol]

However, it's common for rumors involving purported product contamination to be presented as first-person tales, so it's unclear whether that post referenced a separate incident or merely reproduced an existing rumor. (If the post was published in December 2014, the poster may have been exposed to the then-circulating photograph and presented the story as her own.)

Two separate complaints of gel balls or other debris found in Gerber snack foods have appeared on a consumer complaints forum. On 2012, one user wrote:

I bought the Gerber Good Start Gentle Powdered Formula and about the 4 bottle into it, I noticed something shiny in the tub. I shook the tub around until it came to the surface and noticed a ball of some sort. I picked it out with my finger and gave it a little squeeze and green stuff started coming out. I became grossed out and dropped it into my kitchen sink and soon as it became wet it flattened out into a green substance. It looked like a bodily fluid once it became flattened. I was so disgusted. I immediately took a picture with my cell phone and took the container back to the store where I purchased it the day before.

And on 2014, another user complained that:

I poured my son a snack of gerber puffs today and this little piece of what looked to be green glass or plastic fell out of the container. I couldn't believe my eyes. What if my son had been snacking out of the container on his own and ate the item. I immediately called the company. The lady I spoke to was friendly. She said someone would contact me on Monday to schedule a time when someone can pick it up to analyze the object. She also told me she would send me an email so I could email them a picture of the item. I haven't received that email yet. I really hope they take this seriously because I am extremely upset. 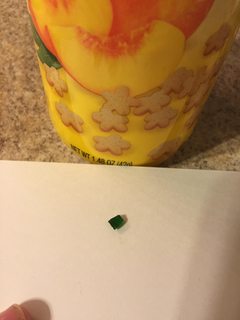 However, those complaints seemed to involve a markedly different contaminant: None of the described debris was the sort of thing one might reasonably expect to find in food, nor were they clearly discernable by-products of the manufacturing process (such as dust, metal, glass, or preservatives). In response to one of what was likely many posts to Gerber's Facebook regarding the rumor, the brand replied:

Hi Emily, thank you for contacting us. We want to assure you all Gerber foods are safe and we talked to Cassandra about this concern this past fall. Thanks.

We contacted Gerber to ask about complaints of gel balls found in Graduates Puffs, and according to a company representative Gerber reached out to the original poster about her complaint but was unable to verify her claim. Gerber said that the circulating Facebook post was the only instance of such a complaint reaching the brand so far.