Did the Proud Boys Disparage Trump as His Presidency Ended? 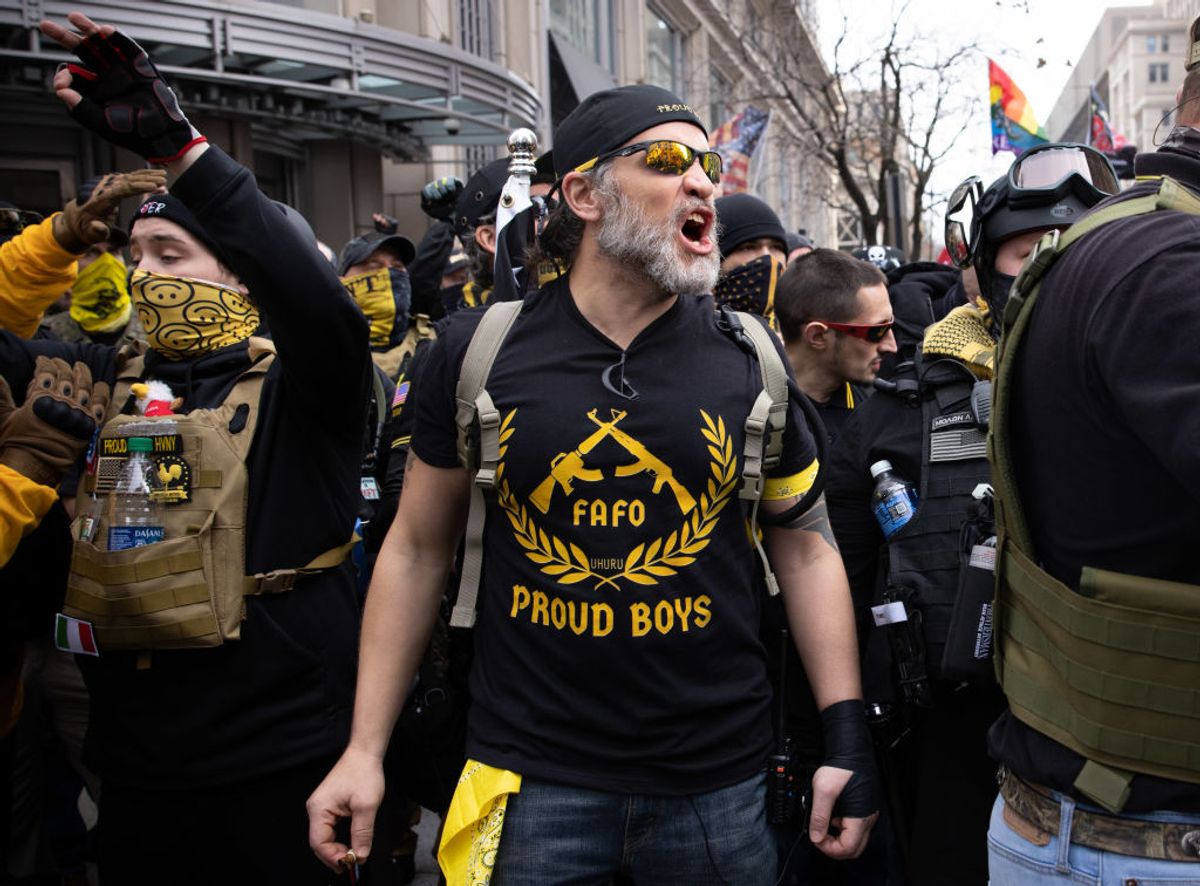 WASHINGTON,DC-DEC12: Proud Boys during a rally for Donald Trump in Washington, DC, December 12, 2020. (Photo by Evelyn Hockstein/For The Washington Post via Getty Images)

Reports based on posts in Proud Boy-linked channels on the messaging app Telegram are disparaging of Trump, expressing a view that he was a failure and that he betrayed his most loyal supporters.

The people expressing views in these channels, which have seen a major rise in membership since the social media company Parler was taken offline, are not necessarily actual members of the Proud Boys or representative of any "official" stance.

On Jan. 19, 2021, The New York Times reported that the pro-Trump, SPLC-designated hate group known as Proud Boys were turning on then-President Donald Trump. The point of contention, in most cases, was Trump's lack of support for them following the Capitol riot, which was instigated in part by Proud Boys. Among the comments highlighted by the Times were that "Trump will go down as a total failure," and "It really is important for us all to see how much Trump betrayed his supporters this week," adding that "Trump was just a man and as it turns out an extraordinarily weak one at the end."

Speaking to the Times, extremism researcher and journalist Jared Holt explained that the Proud Boys "thought they had his support and that, ultimately, Trump would come through for them, including with a pardon if they should need it." This sentiment is expressed explicitly (and sometimes with anti-Semitism) in Telegram posts viewed by Snopes, including one message reacting to the (false) report that Trump would pardon Tiger King's Joe Exotic:

No pardons for middle class whites who risked their livelihoods by going to “war” for Trump. No pardons for Proud Boys, Max and John who had the courage to fight Antifa in NYC. No pardon for Enrique Tarrio who is the chairman of this pro-Trump fraternity.

In Snopes' review of one Telegram channel purporting to speak for the Proud Boys, these sentiments are common. The statements published by the Times and other outlets are, similarly, factual descriptions of comments on Telegram channels associated with the Proud Boys. The only word of caution, according to some researchers, is that the people in these Telegram channels are not necessarily actual members of the Proud Boys. Alexander Reid Ross, who researches extremism online, told Rolling Stone that these channels are seeing a massive influx of new members in recent days, in part due to the removal of Parler and the de-platforming of Trump by other social media companies.

As a result, there is no guarantee that any specific statement made by a member in these Telegram channels is an actual Proud Boy as opposed to someone who is merely a fan of their political messaging. “What we’re seeing right now is because of the de-platforming, all those people on Parler who were not Proud Boys but believed in Trump’s arguments and points, were creating similar channels on Telegram as Parler was getting ready to be taken down,” Kevin Grisham, associate director at the Center for Hate and Extremism, told Rolling Stone. “Now you have people who may have never had much interaction with Proud Boy people and are now on a platform that Proud Boys have traditionally had presence.”

For these reasons, we rank the claim "Mostly True."