Rumors swept social media that a police mount was pushed over during anti-Trump demonstrations, fracturing its leg. 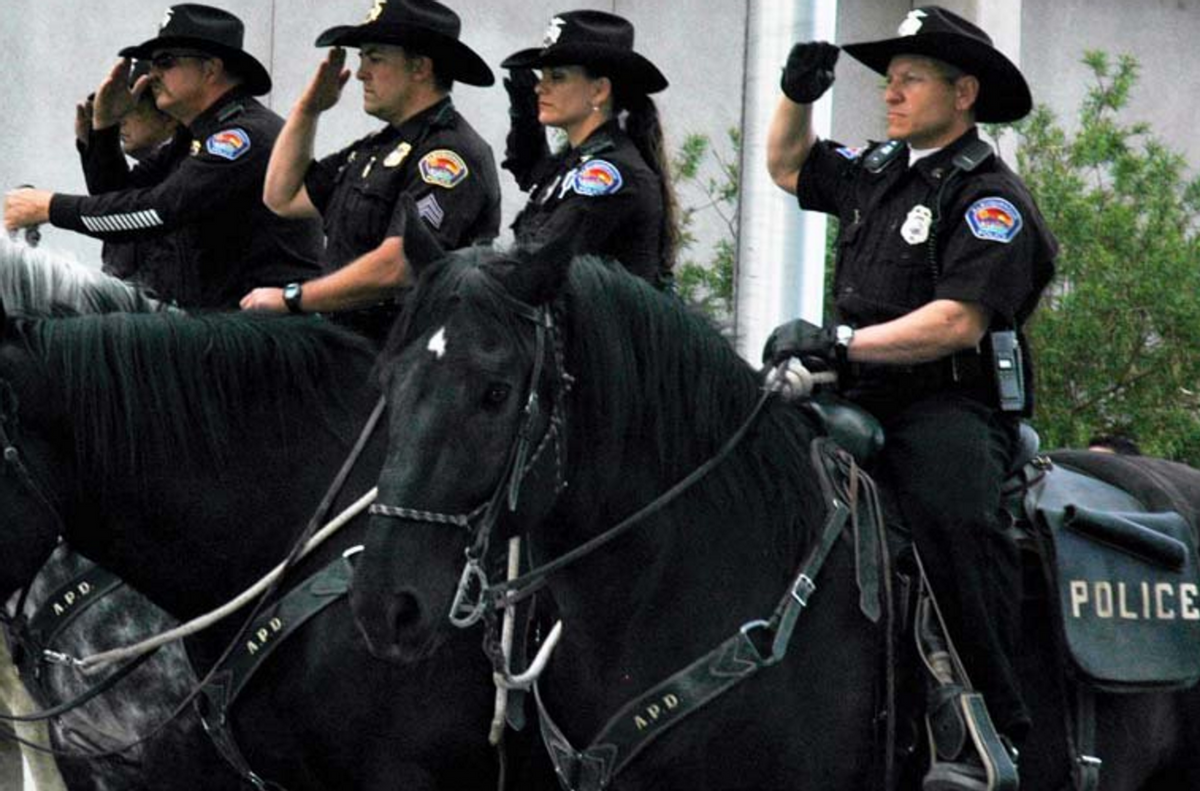 Claim:
A mounted policeman's horse had its leg broken by protesters during anti-Trump demonstrations.
Rating:

Republican presidential frontrunner Donald Trump has been on the campaign trail for months, and many of his political rallies have been characterized by controversy and and sometimes violent demonstrations (both for and against him).  On 24 May 2016, in Albuquerque, New Mexico, hundreds of anti-Trump protestors swarmed the streets in front of its convention center, banging on windows and lighting trash and shirts on fire.

Dramatic photographs and videos emerged from the rally:

The image that arguably evoked the most outrage from the rest of the country, however, was one of a horse that had fallen in the street: That photograph first made the rounds with the correct description — that a police horse had fallen in the street suffering abrasions — but the description of the horse's injury quickly mutated (from scrapes to a fractured leg to death), as did the location of the protest (after another rally on 25 May, this one in Anaheim, that city became the rumored place in which the rumored violence took place).

However, the photograph came from Albuquerque, and the horse's leg wasn't fractured, nor did it suffer major injuries.  It's also unclear why the horse fell. The Albuquerque Journal reported that the horse "slipped," but didn't say that it was specifically because of the protestors shoving or hurting it:

Police eventually routed the Trump supporters away from the gauntlet. Shortly after, about 7 p.m., protesters broke through the barrier containing them in the protest area. And several minutes after that break, they toppled another barrier and rushed toward the Albuquerque Police Department’s mounted horse unit.

The officers quickly responded on their horses, but one of the large animals slipped on the road and buckled to the ground. It wasn’t clear if it was injured but it remained on the line for the remainder of the night.

Other outlets reported that the horse had suffered abrasions, but the rumors continued. The Albuquerque Police Department finally put the issue to rest on Twitter:

The next day, the APD put up follow-up photographs: And Stryker and the characteristic white star on his forehead appeared in the background of a press conference that was broadcast by the Albuquerque Police Department on Periscope on 26 May 2016: Protesters did throw rocks and bottles at the mounted police (and spooked their horses), but Stryker the police horse did not break his leg (in either Albuquerque or Anaheim) and was not killed.

The Albuquerque Police Department's public information officer, Tanner Tixier, told us that had something happened to one of their seven mounts, the department would acknowledge it:

All I can say is as the PIO, I'm also a member of the Horse Mounted Unit and if one of our horses was severely injured or put down, we would honor that horse, not cover it up.