Is a Protester Holding an 'All Holidays Matter' Sign?

An image purporting to show two men with signs — one reading "We must stop the war on Christmas" and another that says "All holidays matter" — is a hoax. 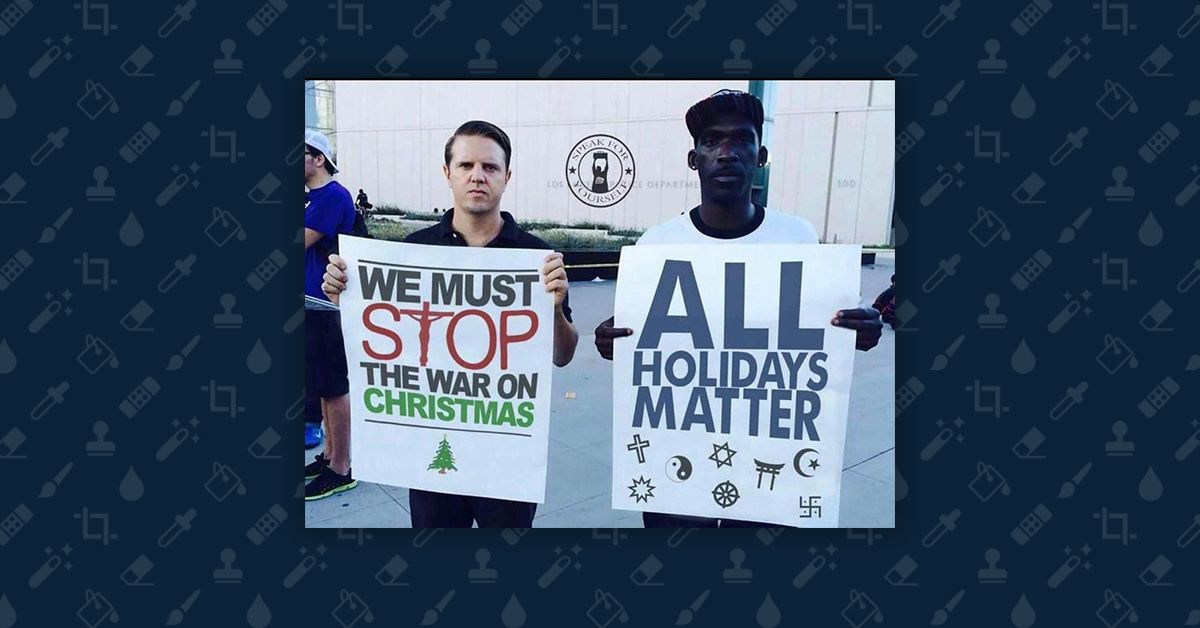 Claim:
A photograph shows a protester holding a sign that says "We must stop the war on Christmas" next to another man with a sign that reads "All holidays matter."
Rating:

The so-called "War on Christmas" has a long, complicated, and racially-charged history beset with hoaxes and rumors, but its participants can generally be categorized into two camps: Those who say "Merry Christmas," and those who don't.

As we entered the holiday season in 2017, an old image purportedly showing two soldiers in this holiday war — one holding a sign saying "We must stop the war on Christmas," and the other holding a sign reading "All holidays matter" — appeared once again on social media: The photograph is real, in that it shows two men holding signs, but the slogans on them have been digitally altered. The "All holidays matter" sign is a play on "all lives matter," a slogan that grew out of a reaction to the Black Lives Matter movement. This is particularly noteworthy, because the original photograph this digital manipulation was based on was taken during a 2014 protest against police violence.

The original image was taken in Los Angeles in 2014, when hundreds of people took to the streets to protest the death of Ezell Ford, who was killed by Los Angeles Police Department officers: A crowd of nearly a thousand gathered outside the headquarters of the Los Angeles Police Department (LAPD) on Sunday, August 17, 2014 to express their outrage the excessive use of deadly force against an unarmed citizen population.

Although we haven't been able to definitively identify the person who snapped this photograph, we did find a second image of the protesters that was taken by Robert Stuart Lowden of Los Angeles Indymedia: The doctored image was posted by the Facebook group "Speak for Yourself" on 3 December 2016, along with the message: "it's that time of year... #AllHolidaysMatter."