Did Prop 47 Legalize Theft Under $950 in California?

The people of California voted for Prop 47 to become a law in 2014. 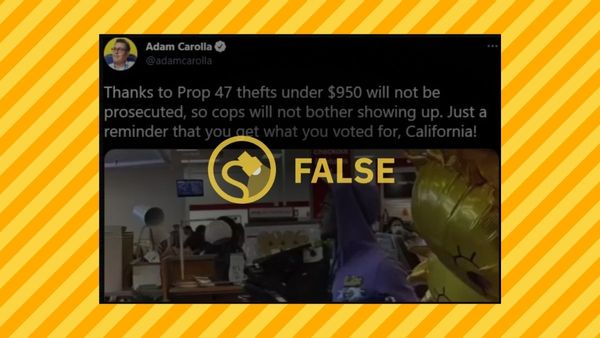 Claim:
The passage of Prop 47 means that thefts involving property valued at less than $950 will no longer be prosecuted in California.
Rating:

Prop 47, which became a law in 2014, reclassifies certain theft and drug possession offenses from felonies to misdemeanors. Shoplifting offenses of property valued under $950 are punishable by up to six months in county jail.

On July 21, 2021, comedian Adam Carolla shared a video on social media that supposedly showed two people stealing merchandise from a store. The video was accompanied by a message claiming that "thefts under $950 will not be prosecuted" thanks to California's Proposition 47 law.

This is not true.

For one, Prop 47 is not a new law. It was approved by a majority of California voters back in 2014. More importantly, Prop 47 does not legalize theft under $950.

The judicial branch of California explains on its page about Prop 47 that the new law "reclassifies certain theft and drug possession offenses from felonies to misdemeanors." Thanks to Prop 47, shoplifting offenses involving property valued at less than $950 are prosecuted as misdemeanors, not felonies, but they are still prosecuted. Such offenses are punishable by up to six months in county jail.

Shoplifting. The proposition added Penal Code section 459.5 to create a new misdemeanor offense called "shoplifting," punishable by up to 6 months in county jail. Shoplifting would be defined as "entering a commercial establishment with intent to commit larceny while that establishment is open during regular business hours" where the value of the property does not exceed $950. Any other entry into a commercial establishment with intent to commit larceny is burglary. Any act of shoplifting as defined above must be charged as shoplifting. No person charged with shoplifting may also be charged with burglary or theft of the same property.

The above-displayed video, which reportedly shows two people shoplifting from a TJ Maxx in Granada Hills, is one of several videos that was circulated online in the summer of 2021 in support of the claim that crime was on the rise in California. However, San Francisco Police Chief William Scott said that the statistics don't support that narrative, pointing to a mid-year report showing that burglaries were down 6 % in the first six months of 2021.

It should also be noted that California is not the only state that has raised the bar for felony convictions. Since 2000, at least 37 states have enacted laws that raised the threshold for what constitutes felony theft. In 2017, Pew Charitable Trusts examined how these laws impacted the crime rate and found that "raising the felony theft threshold has no impact on overall property crime or larceny rates."

Critics have warned that these higher cutoff points might embolden offenders and cause property crime, particularly larceny, to rise. To determine whether their concerns have proved to be true, The Pew Charitable Trusts examined crime trends in the 30 states that raised their felony theft thresholds between 2000 and 2012, a period that allows analysis of each jurisdiction from three years before to three years after the policy change. Pew also compared trends in states that raised their thresholds during this period with those that did not.

This chartbook, which updates and reinforces an analysis published in 2016, illustrates three important conclusions:

We looked at a similar claim back in 2020. You can read more about what Prop 47 does (and what it doesn't do) here.