Did School Apologize for ‘All Lives Matter’ Theme for Black History Month?

A Tennessee principal was the center of a controversy after deciding a theme for her school’s Black History Month. 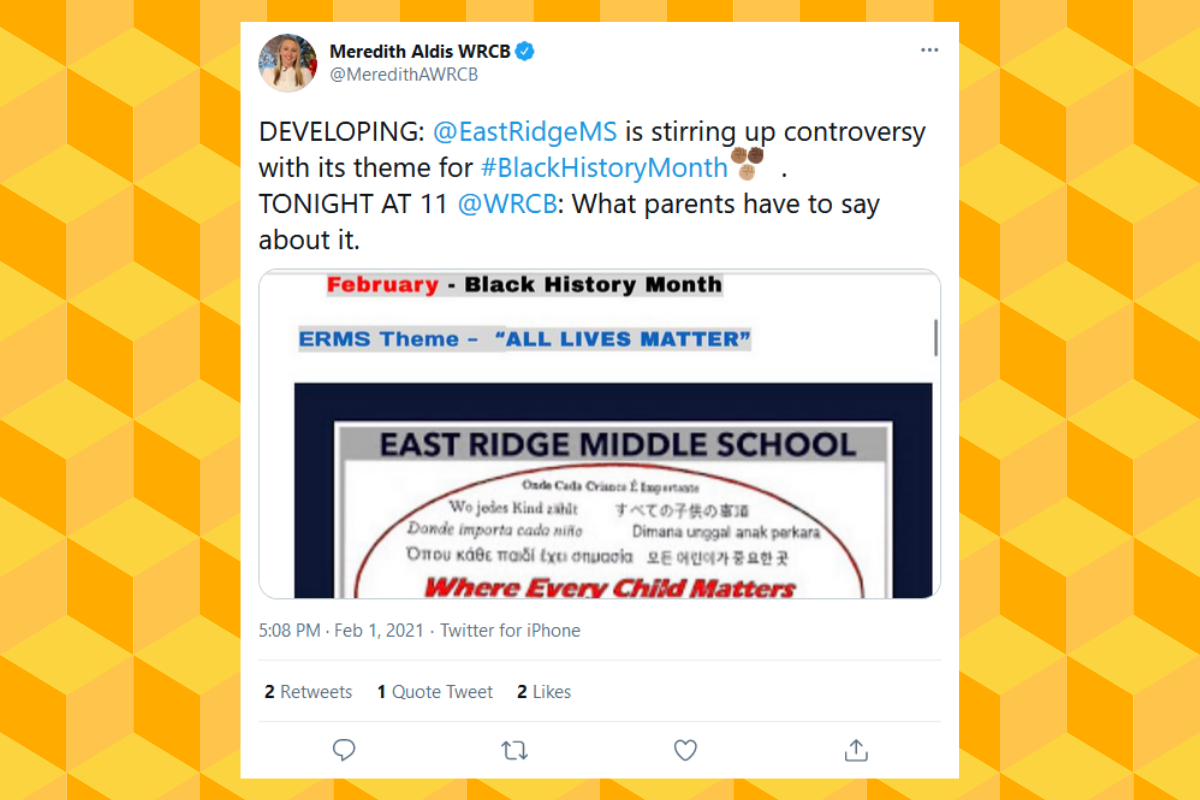 Claim:
A Tennessee principal apologized after backlash to her decision to make “All Lives Matter” the school’s theme for Black History Month in February 2021.
Rating:

When thinking of a theme to commemorate Black History Month, a controversial phrase like “All Lives Matter” doesn’t seem a likely fit. Many argue the phrase has been used by opponents of the Black Lives Matter movement to minimize the impact of systemic racism and police violence on the Black community, and one school principal didn’t appear to get the memo.

In an email newsletter sent to families on Jan. 31, Christy Caldwell Drake, the principal of East Ridge Middle School (ERMS) in Chattanooga, Tennessee, declared that the theme for February's Black History Month would be “All Lives Matter.” A screenshot of the newsletter was shown on WRCBtv, and stated in bold letters, “ERMS Theme - “ALL LIVES MATTER”.”

Parents of the students were not happy with the idea, and the principal retracted the theme in another email sent to families a day later. A Google document detailing her apology was posted on the Facebook page of the school’s Parent Teacher Student Association (PTSA). Drake wrote:

Yesterday, I sent the regular newsletter providing updates to our families as we return to in-person learning this week. As part of that newsletter, I highlighted February as Black History Month with a theme of “All Lives Matter.” I want to apologize for not more fully considering the context of that theme, as my inspiration for it was taken from a mural within our school that states “Where Every Child Matters.”

As a black woman in leadership, I embrace civil rights, Black History Month and the sacrifices that have been made by those who came before me. I hope that my students, many of whom look like me, believe in the possibilities of their unlimited potential.

My father, Dr. Virgil J. Caldwell, was a local pastor and civil rights leader. I had the opportunity to experience firsthand the fight for equality. Additionally, both of my parents were educators, so I learned at a young age the importance of access to high-quality education.

I firmly believe that every child that walks through the doors of East Ridge Middle School matters, and my heart was to emphasize how important each one of our students are to me.

The school mural that said “Where Every Child Matters” was also shared in the original email when Drake announced the “All Lives Matter” theme for February. Given that this controversial theme was acknowledged in the principal’s apology email, we rate this claim as “True.”