A set of images showing President Barack Obama and President Donald Trump in the aftermath of different school shootings are real, but they do not necessarily tell the entire story. 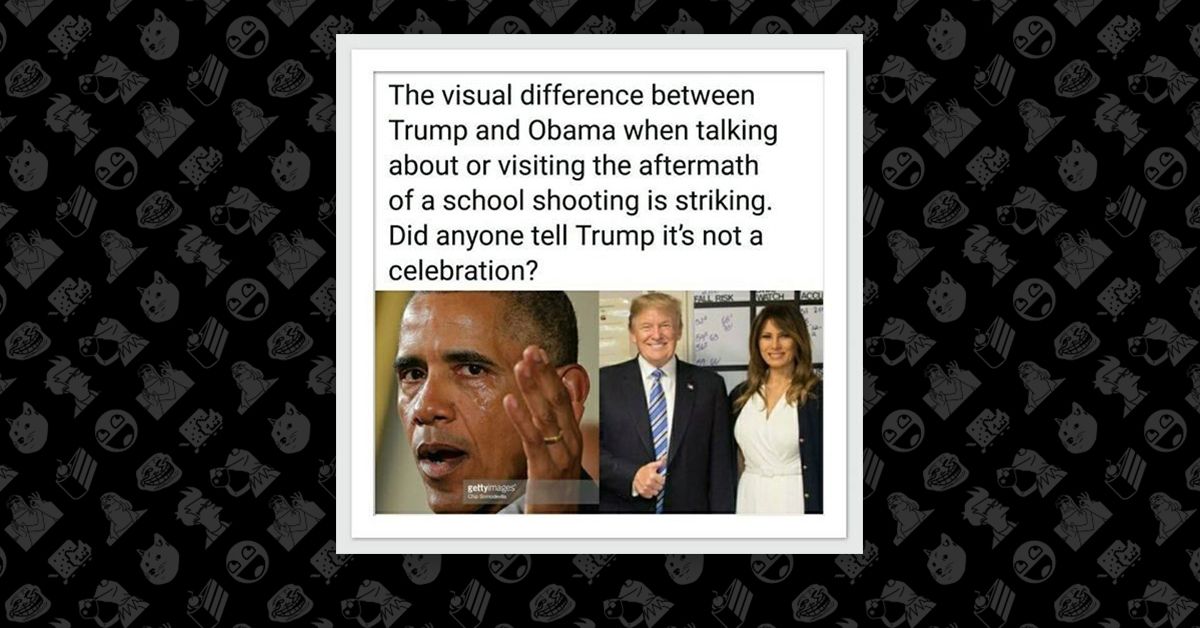 A photograph is worth a thousand words, or so the saying goes. Unfortunately, in the disinformation age, that's not usually enough to tell the entire story.

In the aftermath of a 14 February 2018 school shooting in Parkland, Florida that left seventeen people dead, a set of images purportedly comparing the emotional states of President Barack Obama and President Donald Trump in the aftermath of similar tragedies started circulating online, indicating Obama was distraught and solemn after school shootings while Trump appeared unaffected and unconcerned by the events.

The first set of images shows a tearful Obama and a smiling Trump along with the claim that they showed the Presidents either talking about or visiting the aftermath of a school shooting: Both of these images are real. The photograph of Obama was taken on 5 January 2016, while the President was speaking about the victims of the Sandy Hook Elementary School shooting:

WASHINGTON, DC - JANUARY 05: With tears running down his cheeks, U.S. President Barack Obama talks about the victims of the 2012 Sandy Hook Elementary School shooting and about his efforts to increase federal gun control in the East Room of the White House January 5, 2016 in Washington, DC. Without approval from Congress, Obama is sidestepping the legislative process with executive actions to expand background checks for some firearm purchases and step up federal enforcement of existing gun laws. (Photo by Chip Somodevilla/Getty Images)

The photograph of Trump is also real, but it is slightly misleading. The image included in the viral meme is a cropped version of a photograph that was posted to Trump's official Instagram page after he visited victims of the Parkland school shooting at a hospital in Broward County. The original image shows that Trump is posing with the medical staff, many of whom are also smiling: Our entire Nation, with one heavy heart, continues to pray for the victims and their families in Parkland, Florida. To teachers, law enforcement, first responders and medical professionals who responded so bravely in the face of danger: We THANK YOU for your courage — and we are here for you, ALWAYS! Our administration is working closely with local authorities to investigate the shooting and learn everything we can. We are committed to working with state and local leaders to help secure our schools, and tackle the difficult issue of mental health. God Bless You All — and THANK YOU!

These images are both real, but the comparison is slightly unfair, as they were taken under different circumstances. The image of Trump, for instance, is a posed photograph. All of the participants are looking at the camera and most of the pictured individuals are smiling. The picture of Obama captures a candid moment during an emotional speech.

These images were selected with the intent of constructing a narrative which could easily be reversed by swapping out images.  This cropped photograph, for instance, paints a different picture about President Donald Trump's visit: A second set of images makes a similar point: The image of Obama was taken on 16 December 2012, as the former president read over a speech he was about to deliver in Newtown, Connecticut, about the shooting at Sandy Hook Elementary:

Connecticut, Dec. 16, 2012. Making last-minute edits to his speech in Newtown, before a vigil for those killed at Sandy Hook Elementary School. (Official White House Photo by Pete Souza)

The image purportedly showing President Trump at a disco party at Mar-a-Lago shortly after visiting the survivors of the Parkland shooting also appears to be real. It was originally posted to Instagram by "Sean Bianca" but has since been deleted. The image is blurry and out of focus so it's difficult to tell if the man in the picture is truly the president. Regardless, White House reporter Kevin Liptak reported that Trump was at the Mar-a-Lago event that night:

However, the original Instagram post also noted that Trump was only at the party for a short time, that he didn't dance, and that he was in a somber mood:

Perhaps a more appropriate way to compare how these two presidents responded to school shootings would be to compare the speeches that each delivered in the immediate aftermath of such an event:


Another good way to compare the presidential responses would be to look not at photographs, but at policies they either enacted or tried to enact in order to prevent future mass shootings.