Whether one should is another question entirely. 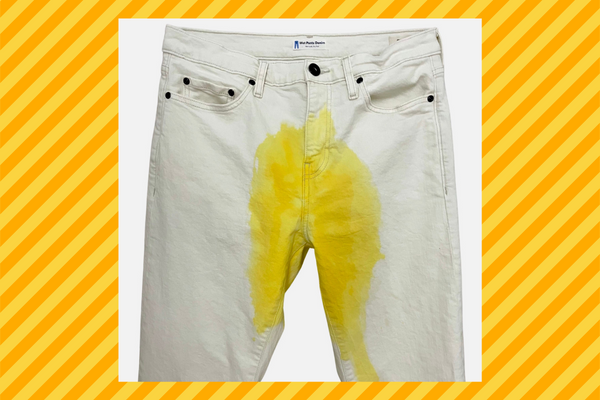 Claim:
Shoppers can buy a pair of hand-stained jeans that look as though the wearer has peed their pants.
Rating:

While the website for Wet Pants Denim appears to be a functional commerce site that accepts orders, as of this writing the owner remains anonymous and examples of successful purchases are scarce. Also, for what it's worth, the company told Snopes in an email: “Could it be interpreted as satire? Sure.”

For just $75, consumers can rock a pair of designer pants individually stained to appear as though the crotch has been wetted with urine.

Described as “un-pee-lievable,” Wet Pants Denim has been featured in a number of publications, including CNet, LAD Bible and The Sun — and Snopes had to ask: Is this trend for real or is it just another piece of internet satire?

“Wet Pants Denim is an authentic lifestyle brand with a unique product and impeccable taste,” the company told Snopes in an email. “Could it be interpreted as satire? Sure.”

People can (and apparently do) purchase the pants. Snopes was told that the team sources and stains the jeans on a per-order basis that “allows for a high degree of product customization.”

“For example, if you’d like a 28x32 blue straight fit with a left-favoring stain, we can deliver that,” they wrote. (By the way, you can order your own pair here.)

Snopes attempted to purchase a pair of pants and was redirected to PayPal and prompted to pay either via a credit or debit card. Though we did not move further with our purchase — money is tight in the journalism world, and we can’t justify pissing the funds away — Wet Pants Denim told Snopes that it started getting significant order volume in 2021, but declined to share specific figures. It did say that the order counts for pants and hats is into the “low triple digits year to date.”

In a 2019 article for the California men’s magazine Mel, journalist Calvin Kasulke described his experience with the “pair of jeans that looked like someone pissed in them.” And then there is this TikTok user, who said in her unboxing video that the pants “smell clean” and are of “really good quality.”

“It’s kinda subtle, enough to wear in public, but you’re going to be turning a few heads,” said @lin.yue in the May video

“The idea behind Wet Pants Denim came through the discovery that some people choose to wet their pants because they like the way it looks. There are two shortfalls with this, however: Wearing wet pants is uncomfortable and when the wet mark dries or the stain is washed, it is oftentimes gone for good,” said the company.

“Wet Pants Denim was created to produce jeans that solve both of these issues. As such, we are providing comfort and greater permanence to a market that is completely overlooked by traditional fashion brands.”

Each pair of jeans is individually stained by hand in the company’s New York City studio. The jeans are then pre-washed to lock in the fabric treatment.

“Despite looking like they have a wet spot, our jeans are completely dry; Wet Look, Dry Feel,” said the spokesperson.

Wet Pants Denim told Snopes that the identity of its founder, who operates the brand on a day-to-day basis, is confidential. The New York City-based company also said that it does not manufacture the individual jeans but rather sources and hand-stains each individual pair once an order is placed.

“We are essentially purchasing blanks and making them our own. The process is not terribly different from the approach small-batch designers take with screen-printed tee shirts,” said the company.

And while the product seems to be authentic, it is important to acknowledge that some of the photos used on the website that show celebrities wearing the "wet" pants, like this one of Pierce Brosnon, likely have been digitally manipulated. That being said, this photo of Adam Sandler’s character, Billy Madison, and this one of Justin Bieber’s wet crotch, and this one of a “cool dad” are very much real.

A look through the Wet Pants Denim website also revealed what the company called its own form of “cryptocurrency.” But don’t be misled by the name — the so-called PissCoin is really just an encrypted digital token that operates as a gift card denoted by product rather than a dollar value. It is not listed on any exchanges and should not be considered a liquid form of currency.

“We believe this is an important and unique distinction relative to how a gift card normally operates - our customers are able to lock in a price at which they can buy our product (either tomorrow or years later),” said the company spokesperson. “For example, if a customer bought our PissCoin today (priced at $75), and we raise our prices next year to keep up with inflation, they wouldn’t pay that increased price when they order their jeans.”

The company said that there is no hidden or deeper meaning behind the wet pants, but that the brand could serve as further evidence that fashion has no rules.