According to a vague Facebook rumor, the grandson of a man named Jimmy Coyne was assaulted at school for refusing to participate in pro-gun control walkouts. 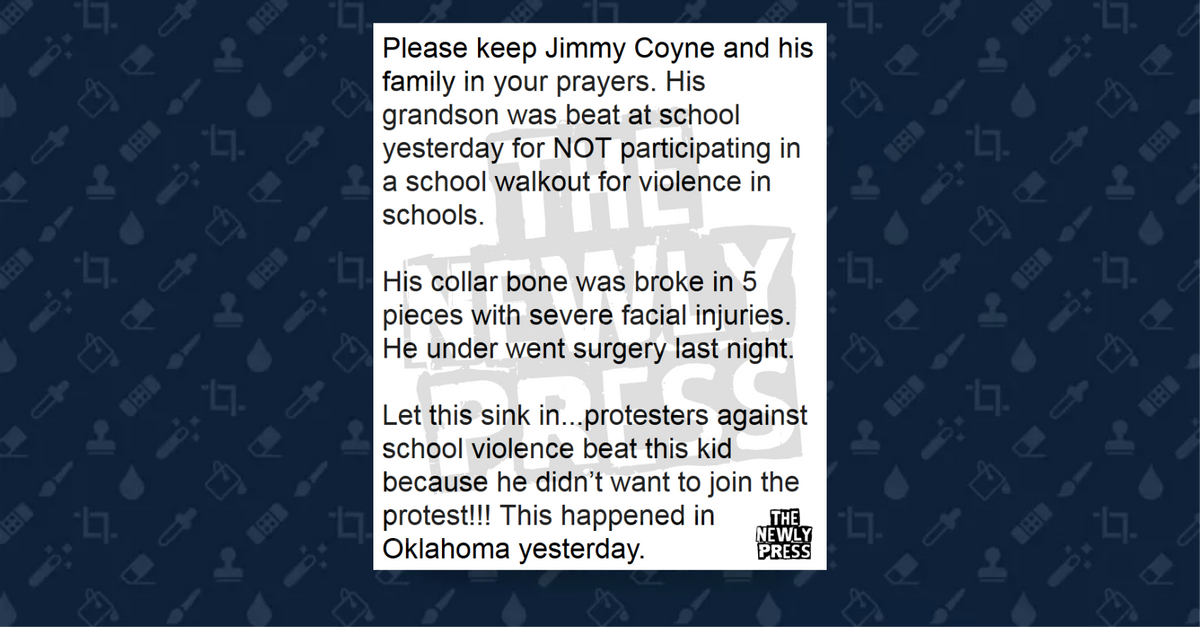 On 18 March 2018, Facebook page "Newly Press" shared a text-based image with the claim that the grandson of a man named Jimmy Coyne was assaulted for refusing to participate in walkouts against school shootings: Please keep Jimmy Coyne and his family in your prayers. His grandson was beat at school yesterday for NOT participating in a school walkout for violence in schools.

His collar bone was broke in 5 pieces with severe facial injuries. He under went surgery last night.

Let this sink in...protesters against school violence beat this kid because he didn't want to join the protest!!! This happened in Oklahoma yesterday.

Missing from The Newly Press meme: A date, names of those involved, the name of the school at which the purported beating took place, and links to information supporting the claims made.

Earlier on 18 March 2018, a Facebook user named Jimmy Coyne shared a status update stating that his grandson had been hospitalized after an altercation at his high school. In the comments, Coyne said the incident occurred at Glenpool High School in Glenpool, Oklahoma:

In his initial post, Coyne did not mention a school walkout or state that Chandler had been attacked for his refusal to participate in one. A different post shared by someone else claims that the boy was attacked for that reason: Several news outlets carried reports about the altercation, but did not name the students. KOTV shared a statement from Glenpool schools confirming the incident occurred, but declined to provide details:

Glenpool Public Schools is aware of a student fight which occurred on campus after the lunch period as students were transitioning back to class. The fight occurred at 11:25 approximately one and a half hour after a student led campus walk-out protesting school violence. Law enforcement and authorities have been made aware of the incident and are investigating. The District is unable to offer any additional detail as the fight involved two district students whose information is subject to protection under both state and federal law. Glenpool Public Schools will fully investigate the incident and take any necessary action allowed under its policies.

On 14 March 2018, KTUL reported that footage of the altercation appeared on YouTube but was later deleted. Although the item didn't describe the video, further details were provided. According to that account based on police in Glenpool, the badly injured student "was in support of the walkout":

According to the Glenpool Police Department, a 17-year-old high school student was arrested and another badly injured after a fight about the student walkout escalated Wednesday morning at Glenpool High School.

Police say the incident started when the older student allegedly took to Snapchat Tuesday night to voice his disagreement about the walkout.

On Wednesday, the older student and a 16-year-old, who was in support of the walkout, got into a fight.

The 16-year-old victim was badly beaten, police say, and is recovering in the hospital.

A third report confirmed that an altercation occurred, but did not discuss the claims. Although the fight does not appear to be in dispute, the only information reported about the basis of the claim appears to contradict the rumor. According to a local news source, the young man injured in the dispute supported the school walkout. That same report said the older student arrested in connection with the assault disagreed.