It's unclear why the video was held for over a year before it was released, and it has some curious aspects to it. 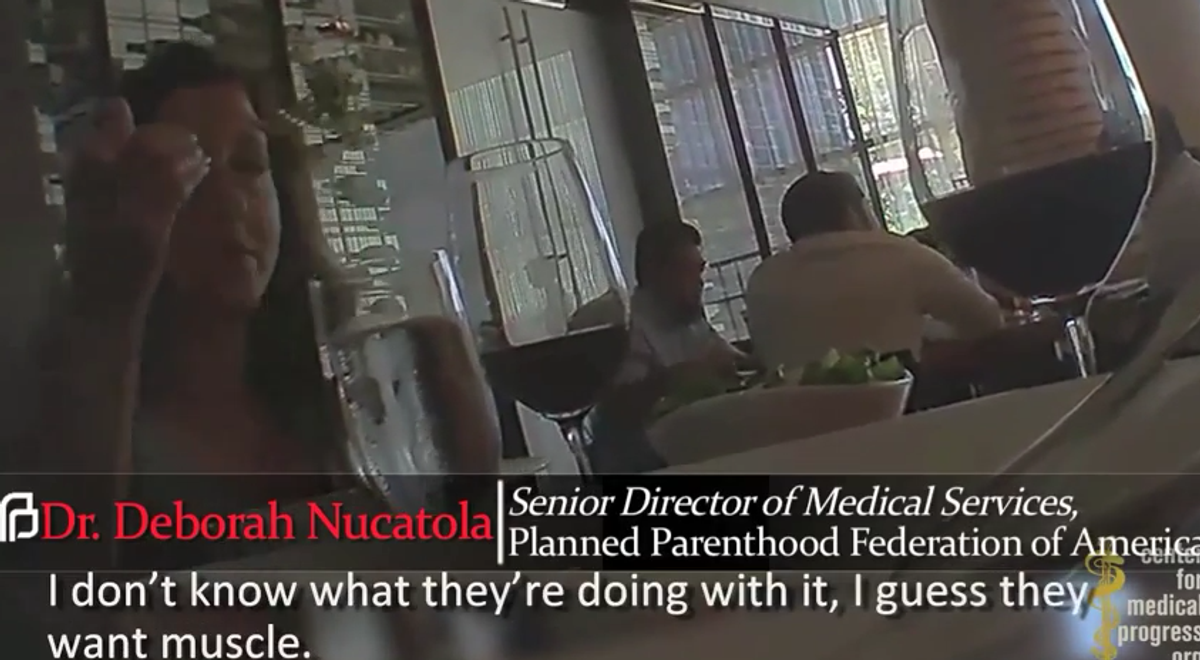 On 14 July 2015, The Center for Medical Progress posted a video purportedly showing a leading Planned Parenthood doctor, Dr. Deborah Nucatola, admitting to a pair of actors pretending to be buyers from a human biologics company that Planned Parenthood sells organs from aborted fetuses:

The average asking price for fetal body parts? Between $30 and $100 per specimen.

The Center for Medical Progress claimed that the video was part of a three-year investigation into Planned Parenthood's practice of selling aborted fetus parts and captured a conversation that took place in July 2014 in which Dr. Nucatola discussed how organs were preserved during the abortion process with an eye towards later sale:

"We've been very good at getting heart, lung, liver, because we know that, 'I'm not gonna crush that part, I'm gonna basically crush below, I'm gonna crush above, and I'm gonna see if I can get it all intact."

"I'd say a lot of people want liver. And for that reason, most providers will do this case under ultrasound guidance, so they'll know where they're putting their forceps. The kind of rate-limiting step of the procedure is calvarium. Calvarium — the head — is basically the biggest part."

It's unclear why the video was held for over a year before it was released, and it has some curious aspects to it. For starters, it opens with a news report and footage of Planned Parenthood president Gloria Feldt condemning "inappropriate behavior," presented in a manner that made Feldt's statement seem like she was commenting on the current issue even though the quote was actually more than a decade old.

When Planned Parenthood faced similar accusations in 2003, Feldt, who was president of the organization from 1996 to 2005 (and not at any time during the alleged three-year investigation referenced here), appeared on the ABC show 20/20 to discuss "alleged abuses by private sector tissue and organ procurement companies":

President Gloria Feldt reinforced concern about the alleged profiteering of fetal tissue donated by women for medical research in Kansas, which was a subject of the ABC News show "20/20" last evening. The ABC "20/20" segment detailed alleged abuses by private sector tissue and organ procurement companies that receive and distribute donations of fetal tissue for research.

"Where there is wrongdoing, it should be prosecuted and the people who are doing that kind of thing should be brought to justice," said Gloria Feldt to ABC's Correspondent Chris Wallace during their conversation for the "20/20" show.

In a separate letter sent to ABC's Chris Wallace, Feldt reaffirmed that Planned Parenthood believes that fetal tissue research is an important endeavor with the potential to save lives and ameliorate disease.

"Planned Parenthood supports research using fetal tissue in accordance with legal and ethical guidelines and are deeply concerned about the attempt by some to profit from the humanitarian contributions of courageous women," said Gloria Feldt.

"We are confident those Planned Parenthood affiliates offering women the option to donate tissue are doing so in accordance with the law and medical ethics," added Feldt.

In addition to the above-displayed video, the Center for Medical Progress also released what they claimed was an unedited version of the conversation (which other sources maintain was in fact edited). Despite the fact that this video is more than two hours long, it contains very little in the way of specifics about exactly what the Planned Parenthood representative is actually offering or selling:

For instance, the "smoking gun" of the original video occurs at the 12:24:00 mark when Nucatola states a price of "$30 to $100," but it's unclear exactly what she is talking about. In the unedited version, Nucatola adds a little clarification: "It has to do with space issues, are you sending someone there who is doing everything, or is their staff, what exactly are they going to do, is there shipping involved or are you coming to pick it up."

Although it is unlawful "to knowingly acquire, receive, or otherwise transfer any human fetal tissue for valuable consideration if the transfer affects interstate commerce," it is legal for patients to donate extracted material for medical research. It's possible that Nucatola is merely outlining the costs (e.g., labor, shipping) of that process, which allows "reasonable payments associated with the transportation, implantation, processing, preservation quality control, or storage of human fetal tissue."

In a press release issued in response to the video, Planned Parenthood asserted that this was the case:

In health care, patients sometimes want to donate tissue to scientific research that can help lead to medical breakthroughs, such as treatments and cures for serious diseases. Women at Planned Parenthood who have abortions are no different. At several of our health centers, we help patients who want to donate tissue for scientific research, and we do this just like every other high-quality health care provider does — with full, appropriate consent from patients and under the highest ethical and legal standards. There is no financial benefit for tissue donation for either the patient or for Planned Parenthood. In some instances, actual costs, such as the cost to transport tissue to leading research centers, are reimbursed, which is standard across the medical field. A well funded group established for the purpose of damaging Planned Parenthood’s mission and services has promoted a heavily edited, secretly recorded videotape that falsely portrays Planned Parenthood’s participation in tissue donation programs that support lifesaving scientific research. Similar false accusations have been put forth by opponents of abortion services for decades. These groups have been widely discredited and their claims fall apart on closer examination, just as they do in this case.

The Center For Medical Progress issued a response to the above-displayed press release, claiming that Planned Parenthood does profit off the use of aborted fetuses despite the group's denial:

The StemExpress brochure does include a quote from Planned Parenthood Medical Director Dr. Dorothy Furgerson as well as words related to finance, although it does not exclusively reference the sale of fetal tissue. It mentions, for example, "cell rich blood and raw materials that are usually discarded during obstetrical procedures," which includes blood drawn or collected from pregnant women (useful in medical research because it contains cell-free fetal DNA).

As reported by The Hill, Planned Parenthood released a second statement about the video in which the organization noted that affiliates can legally receive reimbursement for expenses related to tissue donation procedures:

“Deborah Nucatela was speculating on the range of reimbursement that patients can receive after stating they wish to donate any tissue after a procedure,” the organization wrote in a report.

“The promotional video mischaracterizing Planned Parenthood’s mission and services is made by a long time anti-abortion activist that has used deceptive and unethical video editing, and that has created a fake medical website as well as a fake human tissue website that purports to provide services to stem cell researchers,” the group wrote in a two-page statement.

It also provided several pages of background research about the organization’s use of donated fetal tissue, which it describes as “humanitarian undertaking that hold the potential to cure disease, save lives, and ameliorate suffering.”

The statement explains that Planned Parenthood affiliates can legally receive reimbursement from a tissue donation procedure for the “additional expenses related [to] tissue donation, which can vary based on individual circumstance,” but it does not go to staff members or providers.

The controversy prompted questions about the nature of the Center for Medical Progress, which describes itself as "a group of citizen journalists dedicated to monitoring and reporting on medical ethics and advances." The organization's Twitter and Facebook accounts are both just a few months old, and the only videos found on the group's YouTube page are the two shown above, even though the organization has supposedly been engaged in a three-year long investigation. The group's web site also initially presented nothing more than standard stem cell research-related articles from mid-2013 onwards, until it suddenly switched to its current "investigative" form.

An individual named David Daleiden has been widely credited as the "leader" of the Center for Medical Progress. While Daleiden's online footprint is minimal, a 2009 Claremont University article (penned by fellow conservative activist Chuck Johnson) reported:

James O'Keefe is a friend of David Daleiden's. O'Keefe and Hannah Giles have been going coast to coast documenting instances of ACORN employees willingly giving advice on how to avoid paying taxes and shielding a would be pimp (running for congress) and a prostitutent from the watchful eye of the law. They've brought their investigation to New York City, Washington D.C., and Baltimore.

O'Keefe came to prominence in 2009 after he produced "egregiously misleading" and "severely edited" videos targeting agencies such as ACORN:

Evidence obtained by [California Attorney General Edmund] Brown tells a somewhat different story, however, as reflected in three videotapes made at ACORN locations in California. One ACORN worker in San Diego called the cops. Another ACORN worker in San Bernardino caught on to the scheme and played along with it, claiming among other things that she had murdered her abusive husband. Her two former husbands are alive and well, the Attorney General's report noted. At the beginning and end of the Internet videos, O'Keefe was dressed as a 1970s Superfly pimp, but in his actual taped sessions with ACORN workers, he was dressed in a shirt and tie, presented himself as a law student, and said he planned to use the prostitution proceeds to run for Congress. He never claimed he was a pimp.

“The evidence illustrates,” Brown said, “that things are not always as partisan zealots portray them through highly selective editing of reality. Sometimes a fuller truth is found on the cutting room floor.”

Internet entrepreneur Andrew Breitbart published the ACORN hidden videos, which exposed some actual instances of bad behavior at the organization, but also turned out to be egregiously misleading to the millions who watched them.

This is true of a lot of the ACORN videos. But the San Diego ACORN video was particularly misleading. O'Keefe produced, and Breitbart published and publicized, videos that made an innocent man look as if he was complicit in a would-be plot to traffic underage girls across the border. They didn't do this on purpose. Still, it happened.

And it cost the guy his job.