Was 'Leave It to Beaver' the First US TV Program To Show a Toilet?

Bathrooms were once commonly nixed from TV shows before they aired. 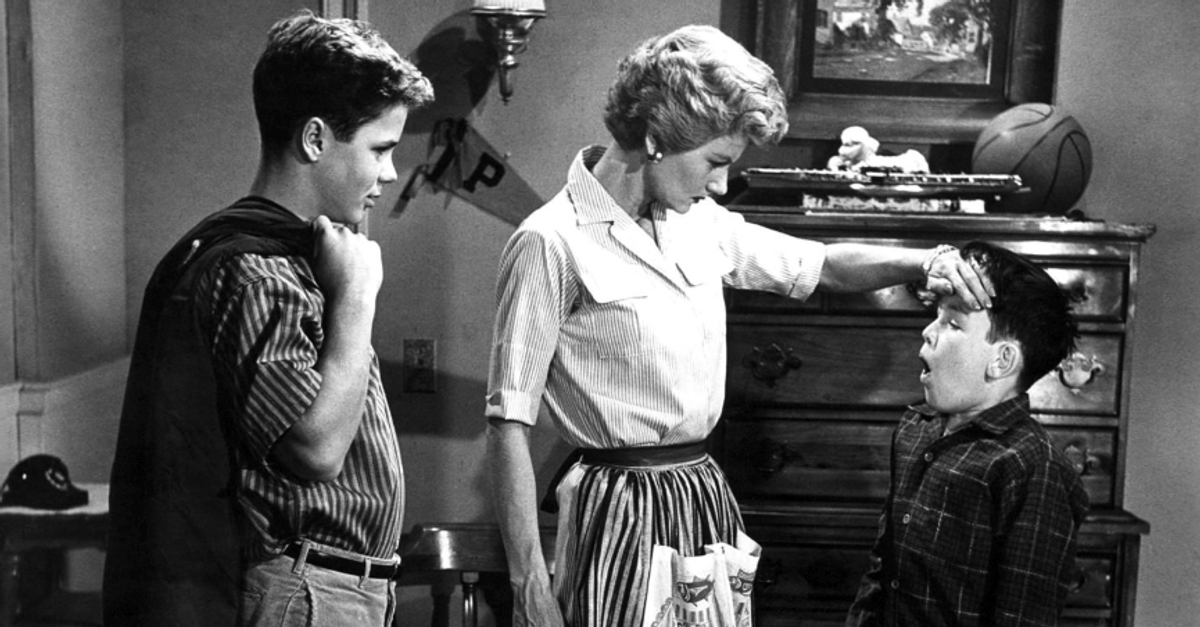 Claim:
"Leave It to Beaver" was the first U.S. network television program to show a toilet.
Rating:

In an episode of "Leave it to Beaver" that aired in 1957, part of a toilet was visible, and it was among the earliest programs to show a toilet in any form.

In the modern era, with our multiple broadcast television networks, hundreds of cable stations, and other premium channels, there is little left that can't be (or hasn't been) seen on television in one form or another. But we older folks (i.e., those of us who grew up during the 1970s or earlier) can still recall and ponder how remarkable it was that for decades, many common aspects of ordinary life were not glimpsed on prime-time television: pregnant women, bathrooms, married couples sleeping in the same bed together, ladies' navels and the like simply weren't recorded on camera, or if they were, network Standards and Practices groups insisted they be excised before broadcast. So squeamish were networks about such matters that in 1960 Tonight Show host Jack Paar famously quit the program (albeit temporarily), incensed that NBC had cut one of his jokes merely because it referenced the abbreviation "W.C." (i.e., "water closet," a term referring to a room with a flush toilet). Even as late as the mid-1970s, the six kids in The Brady Bunch (which ran from 1969 to 1974) all shared a single bathroom that didn't even contain a toilet, and audiences chortled with glee when All in the Family episodes from that same era included the mere sound of a toilet's being flushed off-stage in an unseen bathroom.

It's therefore surprising to many people that one of the many ubiquitous trivia items circulated on the Internet is the amazing but true "fact" (or so we're told) that the very first network television program to show a toilet was the popular, gentle family sitcom Leave It to Beaver, which began its original network run in 1957. Thus this bit of Leave It to Beaver trivia, if true, brings several questions to mind: Why was it that well into the 1970s the networks were so circumspect about letting viewers glimpse an actual toilet if one had already been shown on Leave It to Beaver, a series that had aired way back in the 1950s? And if network practices and/or FCC restrictions prevented the airing of scenes showing toilets in prime-time programs back then, how did Leave It to Beaver manage to get around that restriction?

The answer to both those questions is that Leave It to Beaver didn't actually show a toilet in any of its episodes, although there is a kernel of truth to the claim that it did.

Back in October 1957, the intended debut episode of Leave It to Beaver, entitled "Captain Jack," had to be shelved for a week while another episode aired in its place due to problems with CBS' Standards and Practices group. The network's sticking point with "Captain Jack" was that the plot of the episode had Wally and the Beaver ordering a "genuine Florida alligator" for $2.50 from an advertisement published in their Robot Men of Mars comic book, then being disappointed at receiving not a full-grown saurian but an eight-inch baby gator. Determined to keep their purchase anyway, the boys visited the proprietor of the eponymous Captain Jack's Alligator Farm, who gave them some pointers on the proper care and feeding of an alligator. Wally and Beaver couldn't keep their reptilian pet (now christened Captain Jack) in their bedroom for fear their parents would find it, so they hid him in the bathroom. But merely keeping Captain Jack in the sink or the bathtub would have left him too vulnerable to discovery, so they concealed him by placing him inside the toilet tank (which Wally referred to as Captain Jack's "aquarium").

Therein lay the problem. In 1957 the networks were loath about displaying a bathroom on television, let alone an actual toilet, and the "Captain Jack" episode as filmed required the showing of both. CBS refused to approve the episode in its original form, but it couldn't reasonably be redone with the bathroom scenes omitted since there was nowhere else in the house the boys could plausibly hide an alligator. After several rounds of wrangling between the network and the production company, a compromise was reached: The episode could include shots of a toilet tank, but not the toilet itself. So, in one very brief scene, viewers saw the boys feeding their baby alligator in the middle of the bathroom floor, whereupon Wally walked over to the toilet tank, put Captain Jack inside it, and placed the lid back on the tank. The toilet itself was never seen, only the very top portion of its tank.

Series star Jerry Mathers discussed the controversy over the "Captain Jack" episode during a 2014 interview with FOX News.