Is Portugal an Example of What Happens Without Net Neutrality?

Proponents of keeping the FCC's net neutrality regulations cited a Portuguese company's mobile data plan as a harbinger of the future. 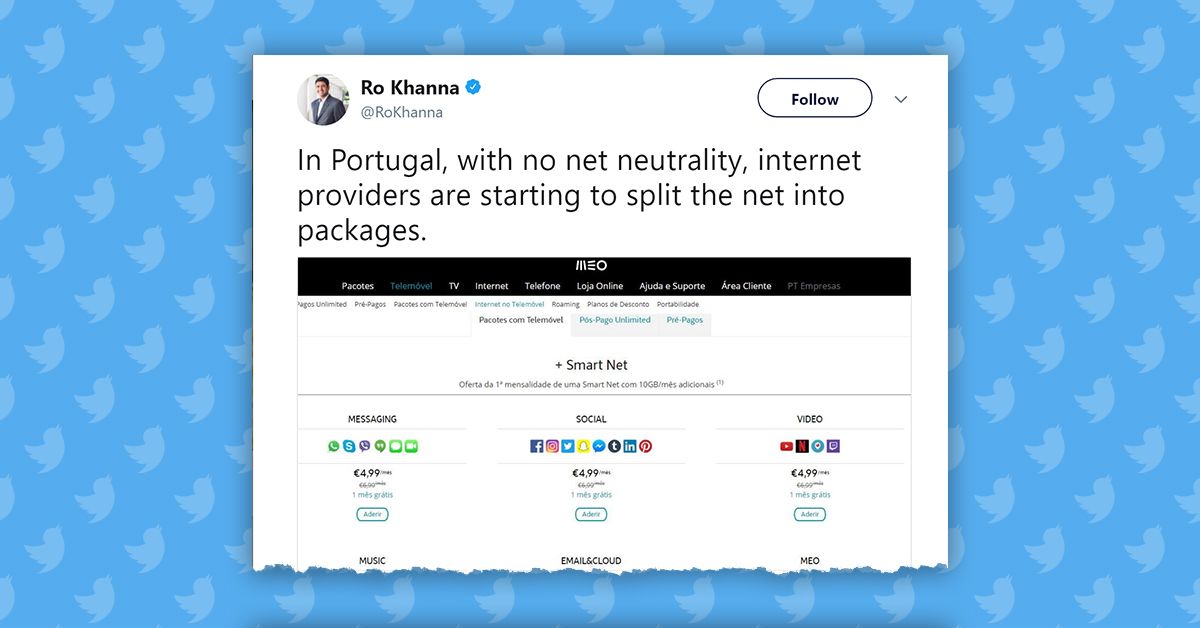 Claim:
Portugal doesn't have net neutrality regulations, and is an example of what happens without such laws; for example, a Portuguese telecommunications company, MEO, is parceling out access to specific broadband apps and content on a fee-for-service basis.
Rating:

By virtue of its membership in the European Union, Portugal does have net neutrality regulations; the prepackaged MEO data plans apply only to mobile broadband usage and are add-ons to, not substitutes for, metered plans offering full Internet access.

Net neutrality is the principle behind a set of Federal Communications Commission (FCC) regulations enacted during the Obama administration mandating that Internet service providers treat all online platforms, content and users equally. Simply put, the rules kept providers from setting fees and transmission speeds that favored some content sources over others. Proponents say net neutrality rules ensure fair competition and guarantee unimpeded access to all legal platforms and content for all users.

Current Trump-appointed FCC Chairman Ajit Pai has been critical of net neutrality (also known as "open Internet"), deriding it as an overly restrictive and unnecessary set of regulations that is akin to "micromanaging" the internet. He has long argued that removing the 2015 restrictions would benefit consumers and the economy. FCC commissioners voted in favor of Pai's proposal to scrap net neutrality on 14 December 2017.

Fittingly, nowhere are the consequences of repealing the open internet rules more hotly debated than on the Internet. One of net neutrality's more fervent defenders in Congress, Rep. Ro Khanna (D-California), tweeted the following on 26 October:

In Portugal, with no net neutrality, internet providers are starting to split the net into packages. pic.twitter.com/TlLYGezmv6

The graphic Khanna used, a screen shot of a promotion on the web site of the Portuguese telecom company MEO, purports to illustrate one of the end-user scenarios net neutrality backers have long predicted would come to pass in the absence of such regulations: limited offerings of pre-selected apps and content packages, with add-on charges for each (comparable to service bundles offered by cable TV providers). Want to view videos? Pay extra. Want to use Facebook and Twitter? Pay extra. And so on.

Khanna's example was quickly seized upon by open Internet advocates who shared the screen shot along with commentaries contrasting what some described as MEO's "à la carte" content menu with the "all-you-can-eat buffet" users are accustomed to under net neutrality. "Portugal Doesn't Have Net Neutrality. This Is What Their Internet Looks Like," read the headline of a typical post in this vein.

Except Portugal does practice net neutrality, and the graphic doesn't accurately depict what Portugal's Internet looks like overall.

The European Union's Body of European Regulators for Electronic Communications (BEREC) established net neutrality guidelines in 2015. Portugal is a member of the European Union, so its internet providers must comply.

The service promoted in the MEO graphic, "Smart Net," is essentially a menu of add-ons to the company's standard mobile data service plan. Contrary to the way it's been presented, it doesn't limit users' access to particular apps or sites. Rather, it lays out prepackaged options via which MEO customers can add extra gigabytes of data usage to their mobile phone plans (similar to Vodafone's "Passes" offerings).

MEO complies with the European regulation on net neutrality and there is no market distortion caused by its commercial offers. The Smart Net offerings correspond only to additional traffic ceilings for certain thematic sets of applications that are no more than the reflection of Portuguese consumer preferences.

Portugal's telecommunications regulatory agency, ANACOM, would not speak to the Smart Net plan in particular but told Observador that "the issue of network neutrality, zero-rating offers and packages with additives are topics under analysis at ANACOM."

Zero-rating is the practice of providing unlimited usage for specific content sources within an otherwise limited or metered data plan (an example of this in the U.S. is T-Mobile's unlimited music and video streaming for mobile users).

Critics such as the Electronic Frontier Foundation (EFF), a nonprofit digital rights advocacy group, say such practices discriminate against content providers who can't afford to compete in a "pay to play" environment and open the door to further preferential treatment. U.S. net neutrality rules, like those of the European Union, don't ban zero-rating outright but mandated case-by-case studies to determine if they had negative impacts on end users or open competition.

FCC Chairman Pai announced in February 2017 that the agency will no longer investigate instances of zero-rating, as, in his words, "These free-data plans have proven to be popular among consumers, particularly low-income Americans, and have enhanced competition in the wireless marketplace."

Although this means mobile Internet users in the United States may indeed see prepackaged data usage add-ons similar to MEO's in the future, it is not a foregone conclusion that this is what Internet access as a whole will look like in the absence of net neutrality laws.

Machado, Manuel Pestana.  "What Is Net Neutrality? Portugal Set as a Bad Example in the United States."   Observador.  22 November 2017.

McSherry, Corynne, Malcolm, Jeremy, and Walsh, Kit.  "Zero Rating: What Is Is and Why You Should Care."   Electronic Frontier Foundation.  18 February 2016.

Scribner, Herb.  "What Could the Net Neutrality Decision Mean for You? Look to Portugal for an Example."   Deseret News.  21 November 2017.

IFLScience.  "Portugal Doesn't Have Net Neutrality. This Is What Their Internet Looks Like."   31 October 2017.