The allegations come after more than two months of escalating protests in downtown Portland, Oregon. 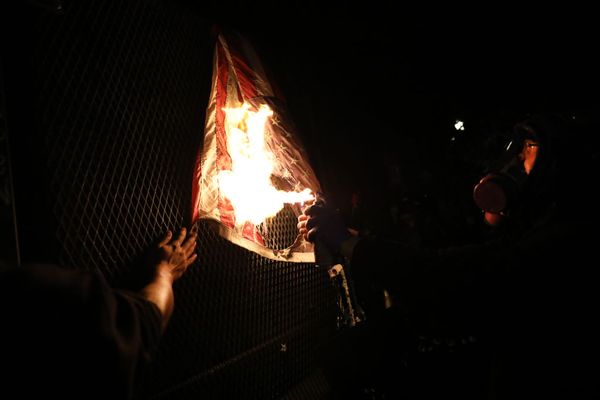 Claim:
Protesters In Portland, Oregon, burned American flags and Bibles during anti-racism protests in the summer of 2020.
Rating:

Viral videos showing what appeared to be protesters in Portland, Oregon, burning American flags and Bibles made waves over the first weekend of August 2020, following more than two straight months of protests in the wake of the death of George Floyd, a Black man who died in Minneapolis in May 2020 while in police custody.

Snopes readers asked us to investigate whether these allegations were factual. After speaking to an eyewitness and police, we conclude that the claim about Portland protesters is true.

Tweets shared by Danny Peterson, a reporter with CBS station KOIN 6, showed several videos and photos of protesters burning American flags and open books that resemble the Bible, as well as several other items, including newspapers and a pizza box. Although videos show items being tossed into a fire and burned, it was not obvious which protest group was affiliated with those actions and whether the books being burned were, in fact, Bibles. Snopes spoke with Peterson, who said that he had seen a truck handing out free Bibles earlier in the day and confirmed with protesters that the book he saw burning was a Bible. The videos were captured outside the Mark O. Hatfield U. S. Federal Courthouse, the epicenter of a months-long clash between federal agents and Black Lives Matter protesters. Peterson described the fires as having happened organically and began after most of the peaceful protesters had left the area.

Conservative publications and social media users laid blame on “anarchists,” the “radical left,” and Black Lives Matter protesters for allegedly burning the flags and Bibles, but officials did not confirm which group the culprits were affiliated with. The groups burning Bibles and American flags did not self-identify with any particular group, Peterson told us.

"Many of these protests have been a non-homogeneous mixture of people with greatly varying political ideologies, and this night was no exception, from what I could tell," he said.

According to his accounts, there wasn't "much violence in the area," but the burning of Bibles and American flags seemed intentional and appeared to be a political expression of some sort and were not just "coincidental objects that people burned in order to make a fire."

Weekend protests began the night of July 31 and were largely peaceful before escalating the following morning, according to a statement released by the Portland Police Bureau (PPB). The agency noted that protesters "lit fires, climbed the fence outside the federal courthouse, threw objects and chanted.”

The statement read, "On August 1, 2020, at about 1:30 a.m. people started a bonfire in the middle of Southwest 3rd Avenue in front of the federal courthouse. People brought plywood and other flammable material to keep it going. Over the next hour, the number of people dwindled to a few dozen.”

In an email to Snopes, PPB Sgt. Kevin Allen wrote that he was unable to confirm whether Bibles and flags were among the items burned, and that the fires were not considered an immediate threat. In the interest of de-escalation, police did not interact with the crowd.

The fire was reportedly put out by members of Moms United for Black Lives Matter, and the crowd had largely dispersed by 2:30 a.m. on Aug. 2.

A video clip of the Portland Bible burning circulated by the Kremlin-backed news agency Ruptly appeared to be among the first viral Russian disinformation campaigns in advance of the 2020 presidential election, according to an Aug. 10 report by The New York Times. The publication likened this form of “information laundering” to money laundering in which Russian news outlets elaborate upon a “kernel of truth” to spin the event into larger, more polarizing issues that exacerbate already tense issues to further separate American voters and political parties.

Updated to include information from The New York Times' report: "A Bible Burning, a Russian News Agency and a Story Too Good to Check Out."