Pope Francis seemingly pulled off a popular trick and whisked a tablecloth from atop a table without disturbing the latter's contents. 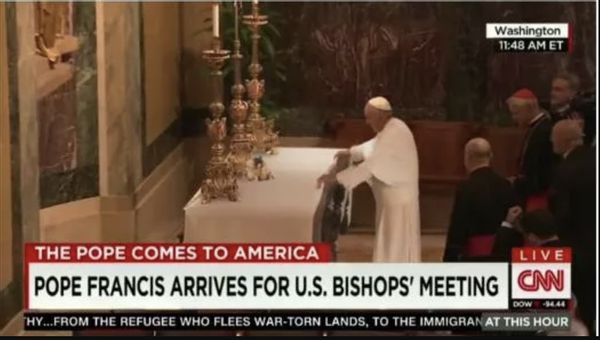 Claim:
Pope Francis was filmed performing a tablecloth trick during his visit to the United States in 2015.
Rating:

The above-displayed video was obviously a joke. Ellen's set up of the clip, as well as the fact that it originated on her program, made that clear. But a few days after this video aired on her talk show, a new version was posted online that lacked Ellen's introduction. And without the comical context of the Ellen Degeneres Show, many viewers were left believing that the Pope actually performed the displayed tablecloth trick.

Of course, that was not the case. The original video from which it was created simply showed the Pope placing some flowers on the table and then walking away: