A photograph of Pope Francis greeting Holocaust survivors is part of a meme containing the baseless claim that the spiritual leader is kissing the hand of a purported architect of a New World Order. 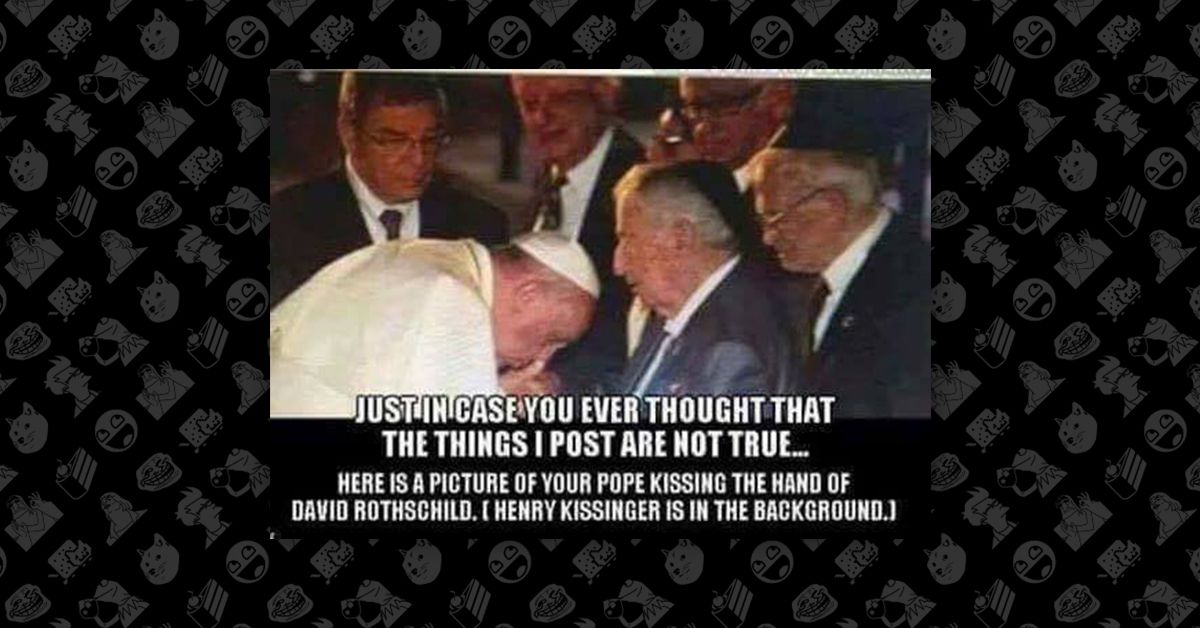 Claim:
A photograph shows Pope Francis kissing the hand of David Rockefeller, Henry Kissinger, or one of many other people targeted by conspiracy theorists as being part of a vast global conspiracy.
Rating:

In August 2017, an old photograph that purportedly shows Pope Francis kissing the hand of an older man wearing a yarmulke took yet another lap around the Internet: This photograph has been circulating online for several years, and is frequently accompanied by anti-Semitic messages promulgating various conspiracy theories about the Rockefeller and Rothschild families, among others.

One particularly tenacious claim is that the billionaires are behind a secret totalitarian world government, generally known as the New World Order, although NWO conspiracy theories have been around for decades — if not longer. A November 2016 video report claiming that the Pope kissed the hands of Rockefeller, Rothschild, and Henry Kissinger was accompanied by a description claiming that the Pope was "afraid for his own life" as he kissed the "NWO Zionists'" hands.

In actuality, this photograph does not feature Rockefeller, Rothschild, or Kissinger. This image was taken on 25 May 2014 at Jerusalem's Holocaust memorial center Yad Vashem, and it shows the Pope making a historic visit to greet survivors of the World War II genocide. The original photograph is available via Alamy, where it was posted with the following caption:

Pope Francis visits the Yad Vashem Holocaust Museum in Jerusalem, attended by Israeli President Shimon Peres and Prime Minister Benjamin Netanyahu on May 26 2014. In his first Middle East tour since his anointment in 2013, Pope Francis held a historic prayer service with the Ecumenical Patriarch in Jerusalem on Sunday. This was the first reunion between the two Christian sects in fifty years.

The following is an excerpt from a EuroNews.com report about the Pope's 2014 visit to Yad Vashem:

Pope Francis navigated the minefield of the Israeli-Palestinian conflict and bowed to kiss the hands of Holocaust survivors on Monday, the last day of a trip to the Middle East laden with bold personal gestures.

“Never again, Lord. Never again!” he said in the dimly-lit Hall of Remembrance in the Yad Vashem Museum which commemorates six million Jews killed by the Nazis in World War Two. Another version of this meme describes the meeting as between the pope and "David Rothschild". There is one member of the Rothschild family named David Mayer de Rothschild, who is perhaps best known for his humanitarian work; keen-eyed readers may have already noticed that he was born in 1978, and anyway looks nothing like anyone in this meme.