A notorious fake news web site wrenches the Pope's remarks out of context to create yet another sensationalist, misleading story. 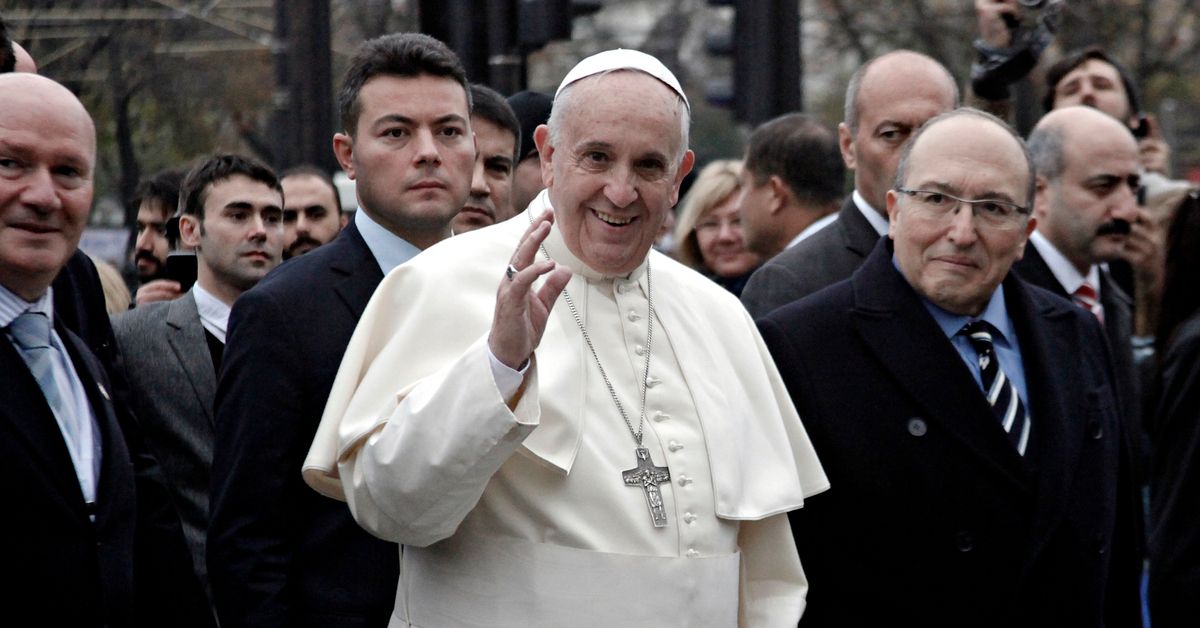 Claim:
In May 2018, Pope Francis said people who own guns were "hypocrites" and could no longer call themselves Christians.
Rating:

In 2015, Francis said people who manufacture and sell weapons of war created "mistrust" if they also call themselves Christians; he also said that those who defended their financial investments in the weapons industry were engaging in "hypocrisy."

Francis's remarks were in the context of international warfare and the global weapons industry, not the American debate over civilian small arms ownership.

In May 2018, the sensationalist, unreliable blog NeonNettle.com reported that Pope Francis had waded into the ongoing debate in the United States over gun rights and gun control, denouncing people who own guns as "hypocrites" and saying gun-owners can no longer call themselves Christians:

As pressure mounts to tear up the US Constitution once and for all, Pope Francis has added to the sentiment by declaring that gun owners can no longer call themselves Christian. Pope Francis continued his week of anti-gun comments on Sunday by saying that those who manufacture, sell or own firearms are "hypocrites," and not Christians. The head of the Catholic Church said when people claim to follow the teachings of Christ but also support gun ownership, it "leads to a bit of distrust."

The article is something of a case study in cherry-picking real quotes and placing them in a misleading context to create an inaccurate impression of what someone actually said. It also wrenches away the broader context of Francis's remarks (international warfare and the weapons industry) and attempts to shoehorn it into the ongoing American debate about civilian ownership of small arms, and the United States Constitution.

In brief, Pope Francis said in 2015 that those who manufacture or sell weapons created "mistrust" if they also "call themselves Christians," and that those who defend their financial investments in the weapons industry are engaging in "hypocrisy." He did not refer to those who own guns. Here is his speech to children and young people during his pastoral visit to the Italian city of Turin, on 21 June 2015. You can watch the original speech in Italian here, or read the Vatican translation below, emphasis ours:

Let’s consider the wars in the world. A few times I have said that we are experiencing the Third World War, but piecemeal. Piecemeal: there is war in Europe, there is war in Africa, there is war in the Middle East, there is war in other countries.... But, can I have confidence in such a life? Can I trust world leaders? When I go to vote for a candidate, can I trust that he won’t lead my country into war? If you only trust in mankind, you have lost!

It makes me think one thing: people, leaders, entrepreneurs who call themselves Christians, and manufacture arms! This gives rise to some mistrust: they call themselves Christians! “No, no, Father, I don’t manufacture them, no, no.... I only have my savings, my investments in arms factories”. Ah! And why? “Because the interest is somewhat higher...”. And being two-faced is common currency today: saying something and doing another. Hypocrisy....

The "week" of "anti-gun comments" refers to one single tweet sent by the pontiff on 29 April 2018, nearly three years later, in which he called for all weapons to be banned, in the interest of achieving peace:

Do we really want peace? Then let’s ban all weapons so we don’t have to live in fear of war.

Neon Nettle creates a false sub-narrative here by inaccurately claiming that the Pope made two major criticisms of the weapons industry in the same week. The same article continues:

Francis's criticism wasn't limited to just owners, however, as also called out those who support citizens' rights to bear arms, adding: "Duplicity is the currency of today… they say one thing and do another."

Francis's criticism didn't extend to owners at all. Neither did he "call out" those who support the right to bear arms. When he referred to "duplicity" ("being two-faced") he was specifically referring to those who defend their financial investments in the weapons industry. Neon Nettle goes on:

Speaking about the written words in the US Constitution that give people the right to own guns, Francis, real name Jorge Mario Bergoglio, said citizens should listen to the word of God, not men, saying: “If you trust only men you have lost.”

This is an outrageous and false recontextualization of the Pope's remarks. When he said "If you only trust in mankind, you have lost," he was specifically referring to the choice faced by a voter, in deciding whether to trust a political leader not to "lead [their] country into war."

As fascinating and important as the Second Amendment to the U.S. Constitution is, it is not something that every world leader focuses on at all times or in every speech. It is possible that Pope Francis might in the future condemn civilians who own guns in the same way as he criticizes those who foster warfare by manufacturing and selling weapons. But so far, he has not.

The kind of misleading sensationalism seen in this article is fairly typical for Neon Nettle, an unreliable web site which regularly fabricates and twists quotations, promotes baseless conspiracy theories, and appears to have a fixation on the Catholic church and child sexual abuse.  In another example of outrageous context-stripping, the web site claimed in August 2017 that Australian Archbishop Denis Hart had described pedophilia as a "spiritual encounter with God through the priest." Hart did say those words, but he was describing the Catholic ritual of confession — not child molestation.