We've seen bad Thanksgiving turkey recipes in our time, but this one really, really blows. 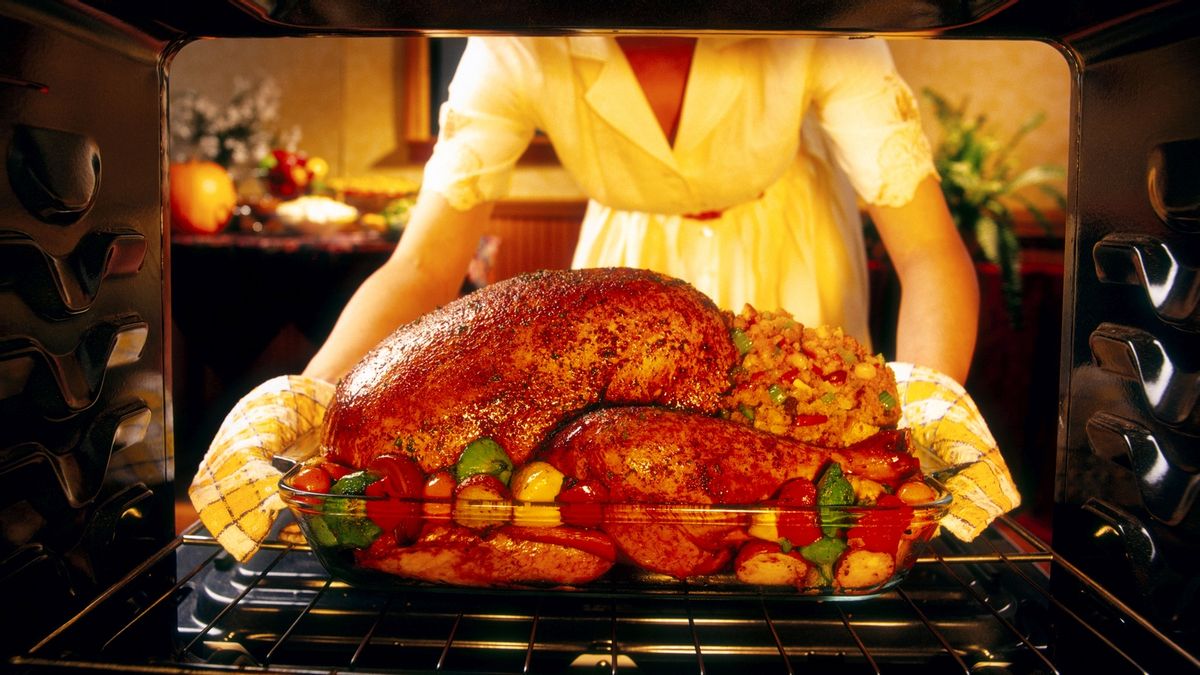 Roast Turkey hot out of the oven. (Image Via Getty Images/Stock Photo)
Previous Article
Next Article
Article 1 of 24 in Collection

Claim:
A turkey dressing recipe that contains unpopped popcorn and is done when "the popcorn blows the ass off the turkey" is real.
Rating:

Tired of the same old Thanksgiving dinner? Here's something sure to liven up your holiday: roast turkey with popcorn stuffing. A reader passed this viral recipe along to Snopes via Facebook. Like it says in the instructions, you'll know it's time to eat when the popcorn "blows the ass off the turkey." This is the meme: 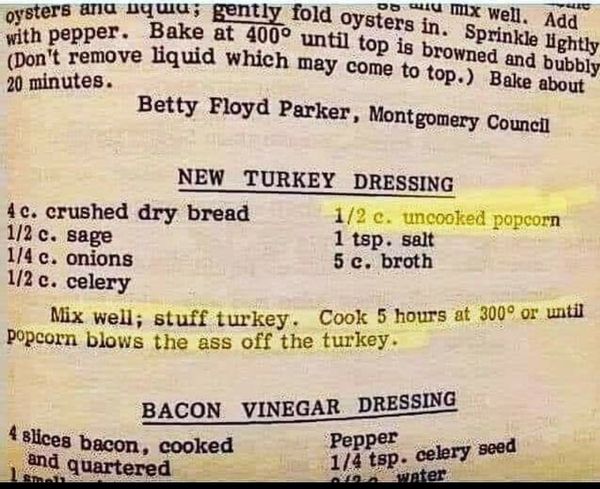 Mix well; stuff turkey. Cook 5 hours at 300 degrees or until
popcorn blows the ass off the turkey.

People typically ask two questions about this recipe: First, is it real? Second, would the popcorn in fact blow the ass off the turkey when it's done?

As to the first question, the answer is no, it's not real. It's rather obviously a culinary joke, and a fairly old one at that. The oldest variant we've found to date was published in 1970. Here it is, direct from the Jackson Hole News, Nov. 19, 1970: 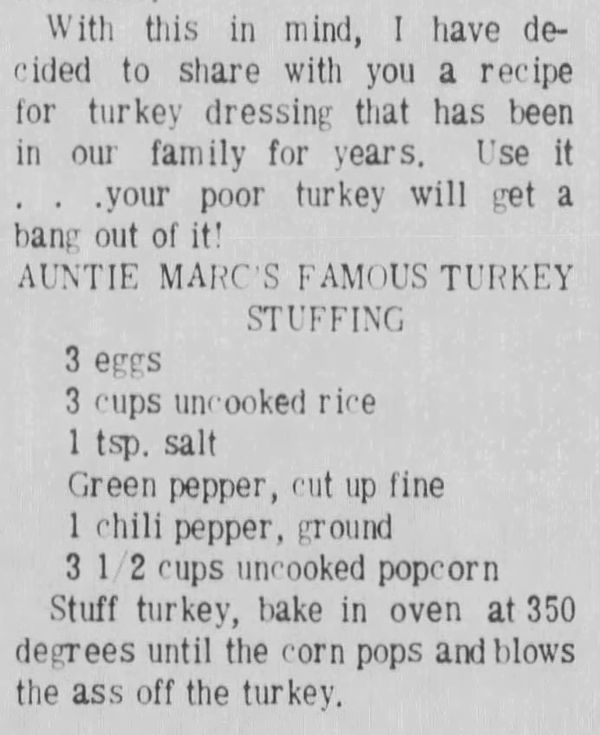 We found a few more variants, but most of them were slight rewordings aimed at avoiding the word "ass" (e.g., "blow the tail off the turkey," "blow the turkey out of the oven," etc.). Before the advent of the internet, one might have ventured to say that no one would be silly enough to actually attempt this recipe. We live in different times.

Some people have expressed skepticism that, given the physics of popcorn, the kernels would even pop under the conditions specified in the recipe, much less cause a stuffing explosion. According to Scientific American, uncooked popcorn typically needs to reach a temperature of 355 degrees F (180 degrees C) before the steam pressure inside the kernels causes them to burst:

The reason why popcorn pops is the water trapped inside its kernel. If the kernel is heated to a high enough temperature, this water will transform into steam. Due to the hard and mostly nonporous shell, the steam has nowhere to go, resulting in a buildup of pressure inside the kernel. Once the pressure gets high enough and the temperature reaches about 180 degrees Celsius (355 degrees Fahrenheit), the kernel hull bursts and the popcorn is turned inside out. The characteristic popcorn consistency and white-yellowish foamy appearance results from the starch inside the popcorn kernel. With high temperatures, the starch gelatinizes and then expands with the rapid burst of the kernel. Once it cools down, the solidified flake we know as popcorn is formed.

Given that a turkey is considered done when its internal temperature reaches 170 to 180 degrees F, the turkey itself would be done long before the popcorn inside it gets hot enough to pop. Even it were roasted in an oven set at a higher temperature, say 400 degrees F, the turkey would be overcooked (if not burnt) past redemption before a significant percentage of the kernels popped.

We briefly considered conducting this experiment ourselves, but fortunately a Google search led us to someone who had already done it and published the results (with pictures!). For his Substack newsletter, Food Is Stupid, Chicago food writer Dennis Lee tried a modified version of the viral recipe using Stove Top stuffing mix and a chicken instead of a turkey. Long story short, the experiment failed miserably, but don't take our word for it. Lee's step-by-step account of his popcorn stuffing misadventure is well-documented, illustrated, and downright hilarious. Give it a read.

"How to Check a Turkey for Doneness." Butterball, 20 Sept. 2022, https://www.butterball.com/how-to/check-for-doneness.

Previous Article
Next Article
Article 1 of 24 in Collection