Rumor: Rep. Trent Franks said Pope Francis does not understand scripture, which he claimed does not obligate Christians to help the poor.

Claim:   Rep. Trent Franks said Pope Francis does not understand scripture, which he claimed does not obligate Christians to help the poor.

Did Rep. Trent Franks really say, on 05/13/2015, "I question if
the pope understands scripture. He's obviously read it but it's just as
obvious that he doesn't understand it. Nothing in the Bible obligates us
to help the poor."

Origins:   On 2015, the entertainment-based Facebook group posted a photograph of Trent Franks of Arizona, appended with a quote attributed to the lawmaker. According to the page, The Republican Franks questioned whether Pope Francis was truly familiar with scripture, maintaining that "nothing in the Bible obligates us to help the poor": 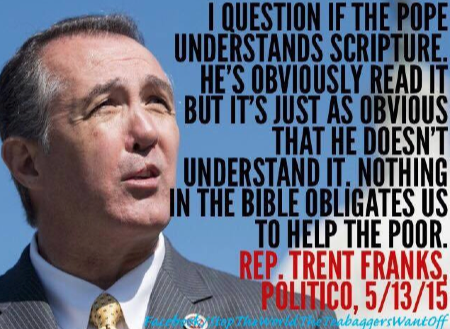 Stop The World, The Teabaggers Want Off generally attributes its quoted content to a well-known source (in this instance, Politico), but the citations typically are bogus. A disclaimer found on the group's Facebook page states all posts are for entertainment purposes only:

Humorous memes are just one of several ways fake news and other shaky content spreads on the internet. Our article "Six Ways to Spot Fake News illustrates many of the ways to spot (and avoid sharing) seemingly credible links that are in actuality humor-based..