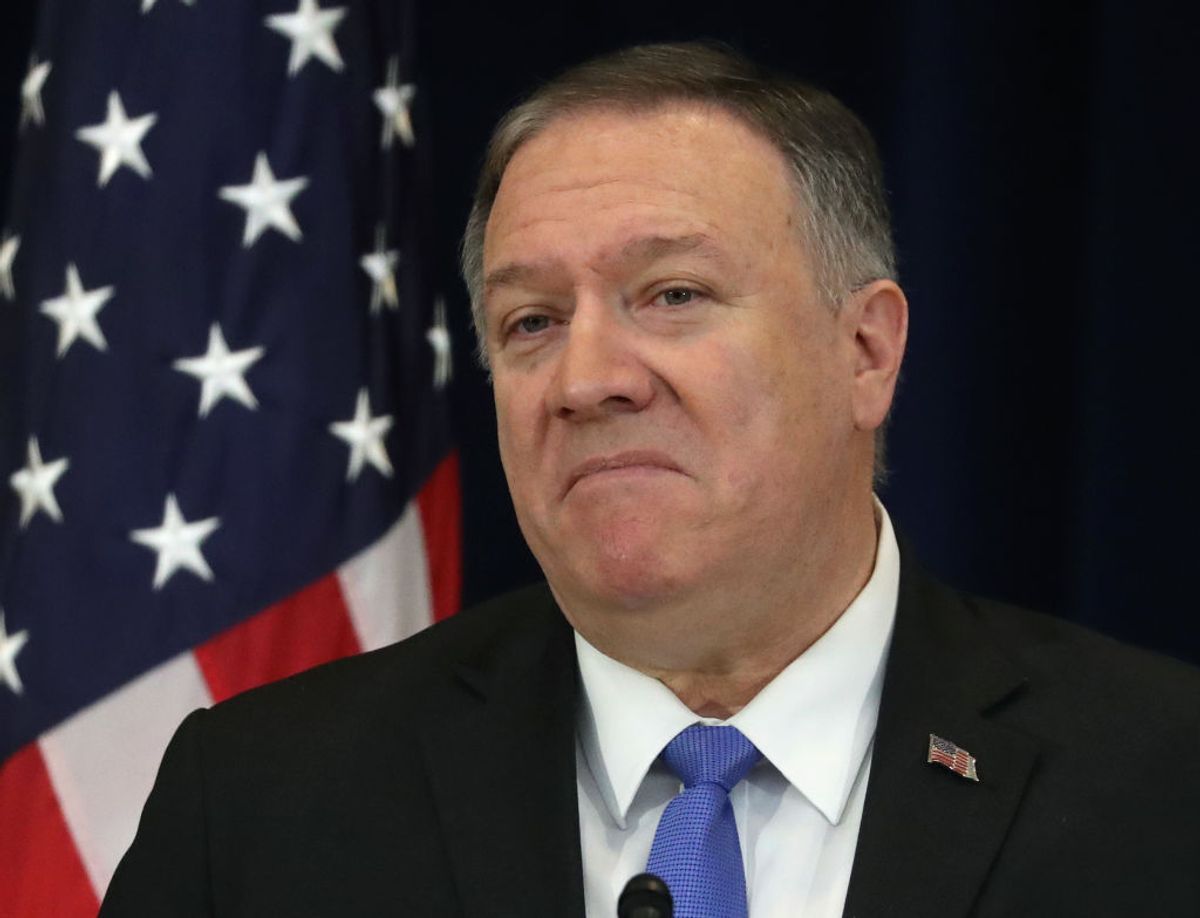 Secretary of State Mike Pompeo did state that as CIA director, "we lied, we cheated, we stole," as part of a longer response to a question about foreign policy.

However, Pompeo did not make the remark as a guest on the Russian state-controlled network, RT. He made it in April 2019 while visiting Texas A&M University.

In late December 2019, social media users shared a video clip of U.S. Secretary of State Mike Pompeo saying, "I was the CIA director, we lied, we cheated, we stole." The clip contained the green logo of RT, formerly Russia Today, a Russian government-controlled, state television network that broadcasts in English.

The idea that Pompeo had gone on the propaganda network of an adversarial foreign power to make derogatory remarks about an American intelligence agency drew rebuke. But Pompeo did no such thing. He made the remark while visiting a university in Texas, and it was an aside made as part of a much longer response to a question about foreign policy.

RT shared the clip with the logo on its Twitter account on Dec. 8, 2019. Others then shared it, apparently under the assumption that Pompeo had made the remark recently while a guest on RT. The clip shared by RT is a brief snippet taken from a much more detailed response during a question-and-answer session with Pompeo during an April 2019 visit to Texas A&M University. When asked by a student how he deals with controversial governments like that of Saudi Arabia, Pompeo offered an anecdote about various tools the U.S. can use, in various combinations, when dealing with governments that range from friendly to adversarial. Beneath the video clip, we have transcribed the entirety of Pompeo's answer to the question.

Question: How do you balance condemnations with concessions and diplomacy with a controversial government such as Saudi Arabia?

Pompeo: So I always begin with a deep understanding that no Secretary of State gets through their first day without recognizing, it's a tough world out there. We don't appreciate how glorious it is to be here in the United States of America on a consistent-enough basis and with enough fervor. Maybe you do here at Texas A&M but I think too many Americans don't understand how blessed we are. These are, are many many tough places out there.

Having said that, not all tough places are the same. They each present a different set of challenges. It reminds me, you would know this, but it's a bit of an aside. But in terms of how you think about problem sets, when I was a cadet, what's the cadet motto at West Point? 'You will not lie, cheat or steal or tolerate those who do.' I was the CIA director, we lied, we cheated, we stole. That's, it was like, we had entire training courses.

It reminds you of the glory of the American experiment. And so when you deal with these countries, you have to just recognize they're not all the same. Some of these difficult, nasty places want to partner with the United States and just haven't gotten to the right place yet, just haven't been able to move their own institutions. And some of them may only be trying half as much as they ought to be trying. But they're trying to move in the right direction. That presents a very different way of thinking about how the United States ought to address them. In those cases we ought to assist them. We should never shy away from calling them out. We have to be consistent. The State Department puts out every year a human rights report. It's just a compendium of bad acts around the world during the last 12 months. It's way too long a book. But you should look at it. We call out friends, we call out adversaries. We call out everyone in between. But we have to find places where some of these countries that aren't living up to our human rights standards, we address it, we work to fix it, we hold them accountable as best we can and then we work to make sure those things don't happen again.

There are another set of bad actors who would just as soon see you all perish from this planet. That calls out for a different American response. And so sorting those through, figuring out exactly the right mix of American tools, diplomatic tools, economic tools, political tools, military tools, figuring out precisely what the right mix is the task that we engage in at the State Department but we do it with all of our partners in the national security apparatus as well. So the leadership in the White House, the Department of Defense, the Intelligence Community, the Department of Treasury, we were talking about sanctions. All of those have an important piece of figuring out what exactly the right mix is.

And so just two things One, we need to constantly evaluate if we have that right with respect to every one of those actors. Have we got the right balance? Are they still in the same place? Are they still making progress? Are they still serious about addressing the shortcomings that we identified? And then second, we have to be relentless whether they are our friends or adversaries, at making sure when a nation falls short that America will never shy away from calling them out for that behavior that didn't rise to the level that we hope every nation can achieve.

RT's use of the clip is not the first time a foreign government has exploited the statement. In June 2019, the Chinese Foreign Ministry cited it as cause to doubt Pompeo's statements in response to reports that Iran had captured an alleged American spy ring.

In sum, although Pompeo did make the statement about the CIA lying, it's not true that he made it as a guest on RT, as some stated. We therefore rate this claim "Mixture."