Were Poll Watchers 'Thrown Out' of Vote Counting Rooms?

In the wake of the 2020 presidential election, the Trump campaign spread this rumor in fundraising emails but walked it back in court. 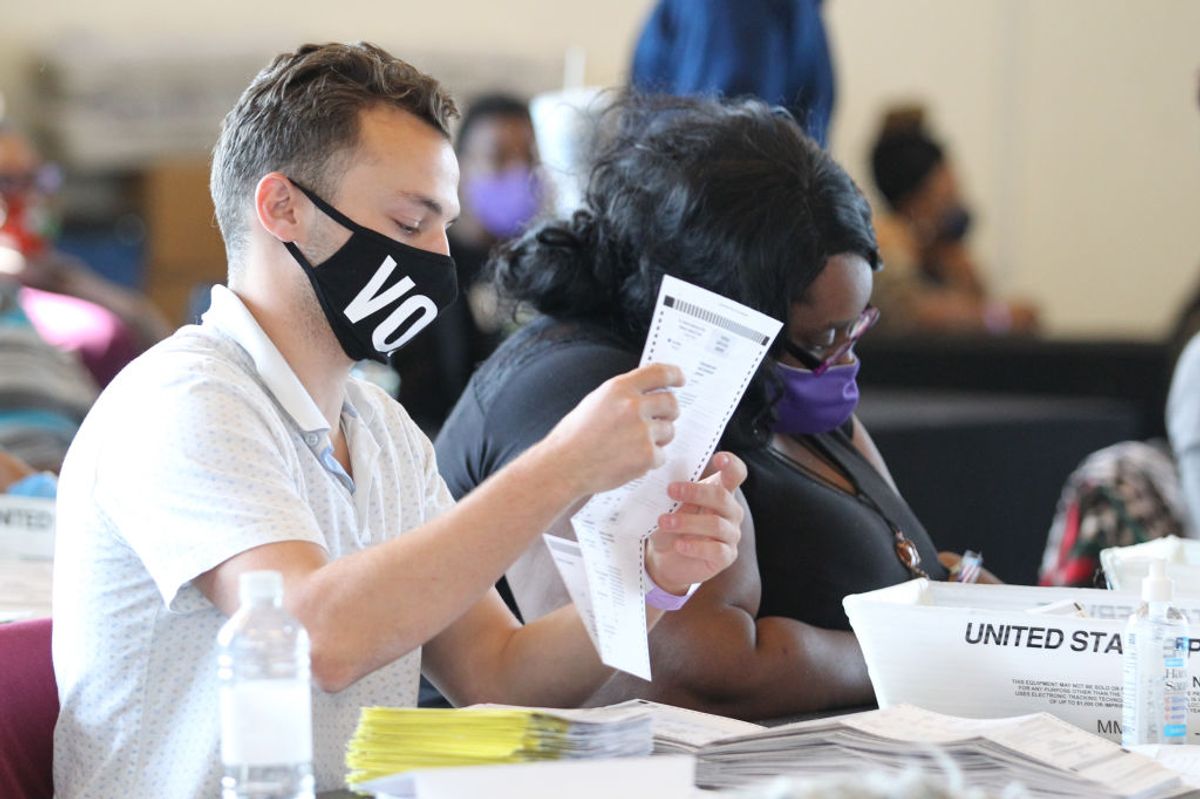 Claim:
Large numbers of poll watchers were thrown out of vote counting rooms in many key battleground states in the 2020 U.S. presidential election.
Rating:

"Large numbers of poll watchers were thrown out of vote counting rooms in many key battleground states," claimed a Nov. 17 email obtained by Snopes. Separately, the Trump campaign sent supporters another fundraising email that claimed Republican poll watchers were not "thrown out" but prohibited from entering ballot-processing rooms altogether, suggesting that the alleged lack of surveillance benefited President-elect Joe Biden.

“The best description of this situation is widespread, nationwide voter fraud, of which this is a part," Rudy Giuliani, Trump's personal attorney, said of the alleged conspiracy by Democrats, without citing any evidence.

Together, the emails and Giuliani's statement claimed that some unidentified person, or a group of people, ordered Republican poll workers to leave ballot-counting rooms, or to not enter them in the first place — essentially breaking laws that allow for poll observers to monitor the elections process on behalf of a political party or candidate.

Before we unpack those allegations, let us explain about whom we're talking.

Every state allows some form of "poll watching" or "election observing," by means of which political parties or candidates appoint volunteers to monitor polling sites for fairness on Election Day. Additionally, states train and certify nonpartisan poll watchers to keep an eye out for any voting issues.

Rules governing both types of poll watching, especially to combat any voter harassment or intimidation, vary state by state, and apply to poll watchers regardless of their political affiliation.

"State rules vary on who can be a poll watcher, how many are allowed at polling places or local elections offices, and how they must conduct themselves inside the office or precinct," according to The Associated Press.

The Trump campaign alleged poll watchers were blocked from doing their jobs "in many key battleground states," though it did not, in its emails, pinpoint one or more locations where this supposedly occurred. Giuliani, however, claimed Democrats in cities including Philadelphia, Pittsburgh, Atlanta, Las Vegas, and Phoenix were behind the alleged conspiracy to undermine Trump's reelection.

No poll watchers with the Democratic party raised issues with the 2020 election.

For more details about the Trump campaign's allegations, we referred to the campaign's lawsuits challenging various aspects of the presidential election to determine where, exactly, the campaign believed citizen monitors were wrongfully kicked out of ballot-processing rooms.

However, on Nov. 17, the Pennsylvania Supreme Court ruled distancing regulations at polling sites were "reasonable" in that they allowed poll monitors to see what was happening, as prescribed by state law. (You can read that decision here.) The high court's ruling countered an earlier decision by a lower court that sided with the Trump campaign. Days before that decision, U.S. District Judge Paul S. Diamond asked a Trump campaign lawyer during a court hearing if poll watchers were allowed in the room where election workers were processing mail-in ballots in Philadelphia.

“There’s a nonzero number of people in the room,” campaign lawyer Jerome Marcus replied, acknowledging that Trump representatives were indeed present despite the campaign's messaging.

Additionally, Republican poll watchers in Michigan's Wayne County filed a lawsuit alleging fraud during absentee ballot counting at a Detroit convention center. That litigation sought to halt the state's vote certification process. But two judges found no evidence to support the accusations and allowed the process of certifying votes to proceed, finalizing the state's voter tallies.

"Other lawsuits claimed poll watchers were temporarily denied access in some locations, but there has been no evidence to back it up. Nor was there evidence of votes being miscounted out of political bias. And most of the litigation alleging this has been dismissed."

In other words, there was no evidence of any person or entity blocking poll watchers' access to polling sites on Election Day, no matter their presidential candidate of choice.

Additionally, there were no reports of someone, or a group of people, "throwing out" poll observers from rooms to which election laws guarantee them the right, as of this report.

Those conclusions do not eliminate the possibility that poll watchers at some (or many) sites across the country were asked to follow distancing guidelines to prevent the spread of COVID-19 and avoid distracting voters. However, there's no proof of such requests being part of a nefarious scheme to help Trump or Biden, or any political cause.

We should note here: The emails about poll observers from Trump's campaign asked supporters to chip in to a so-called "Official Election Defense Fund" or "Election Defense Task Force," both of which the campaign framed as costly initiatives involving ballot recounts or various lawsuits to challenge Biden's win.

In sum, no evidence showed poll watchers were removed or prohibited from rooms were ballots were being counted in the Biden-Trump race, even though physical distancing rules may have affected the monitoring. In fact, one Republican lawyer representing Trump provided evidence to the contrary and acknowledged Republican poll watchers in Philadelphia were indeed allowed in ballot counting rooms.