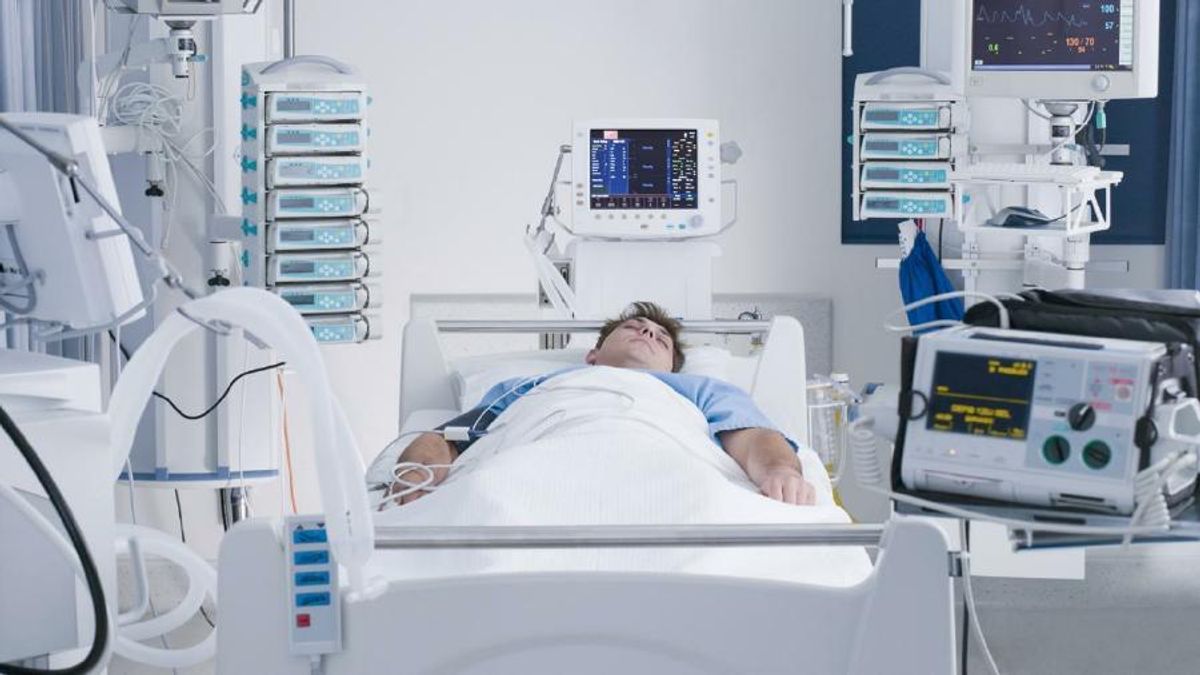 Claim:
An inattentive janitor caused several deaths in a hospital when he disconnected patients' life support systems to plug in a floor polisher.
Rating:

The 1990s saw the spread of a shocking account of tragic, accidental deaths in the very place where people are supposed to recover from their illnesses -- a hospital:

"For several months, our nurses have been baffled to find a dead patient in the same bed every Friday morning," a spokeswoman for the Pelonomi Hospital (Free State, South Africa) told reporters. "There was no apparent cause for any of the deaths, and extensive checks on the air conditioning system, and a search for possible bacterial infection, failed to reveal any clues."

"However, further inquiries have now revealed the cause of these deaths. It seems that every Friday morning a cleaner would enter the ward, remove the plug that powered the patient's life support system, plug her floor polisher into the vacant socket, then go about her business. When she had finished her chores, she would plug the life support machine back in and leave, unaware that the patient was now dead. She could not, after all, hear the screams and eventual death rattle over the whirring of her polisher."

"We are sorry, and have sent a strong letter to the cleaner in question. Further, the Free State Health and Welfare Department is arranging for an electrician to fit an extra socket, so there should be no repetition of this incident. The enquiry is now closed."

There was a case in one hospital's Intensive Care ward where patients always died in the same bed, on Sunday morning at regardless of their medical condition. This puzzled the doctors and some even thought that it had something to do with the supernatural. No one could solve the mystery as to why the deaths occurred around on Sundays.

So, a Worldwide team of experts was assembled to investigate the cause of the incidents. The next Sunday morning, a few minutes before all the doctors and nurses nervously wait outside the ward to see for themselves what the terrible phenomenon was all about. Some were holding wooden crosses, prayer books and other holy objects to ward off the evil spirits.

Just when the clock struck 11... Pookie Johnson, The part-time Sunday sweeper, entered the ward and unplugged the life support system so that he could use the vacuum cleaner.

If nothing else, the bit about the hospital's sending a sharply-worded letter to the cleaning company who employee was responsible for multiple deaths should give one pause. Was ensuring that the janitor was reprimanded by his employer really the hospital's greatest concern?

Oftentimes it's the tail ends of these stories which make the difference between cute ones which get told once or twice then drop out of sight, and ones such as this, which get forwarded all over the world. The floor cleaner's mistake is bad enough; what sends this story over the top is the callous matter-of-factness of the hospital. What does it say about health care in South Africa?

Summer 1996 saw this hilarious yet chilling account take the Internet by storm. In an article purportedly from the 1996 Cape Times ("Cleaner Polishes Off Patients"), it quickly became the story of the moment. Various publications picked it up and ran it as a news item, adding to the legend's credibility.

Bottom line: no matter how many papers you might have read that said different, there were no Friday massacres in Pelonomi Hospital, no murdering floor cleaners, no overly-callous hospital spokespeople imperiously intoning, "The enquiry is now closed." It's folklore, pure and simple tall tale that got loose, then went on a rampage.

How did this amazing story come to be taken as a news item? As always, through a misunderstanding. The legend had been around forever, so Die Volksblad (a small yet widely-circulated rural South African newspaper) took it upon itself to get to the bottom of this persistent rumor. Part of that effort to uncover the truth resulted in a Die Volksblad article asking those related to the victim(s) to come forward.

That article was picked up by Die Burger, and it was Die Burger's article which Cape Times got its hands on. In much the same way children playing a game of "Telephone" will invariably garble the message, Cape Times' version came out as a news story, not as a rural paper's attempt to sort fact from fiction. From there the tale went to other publications, very few of whom bothered to check either with Pelonomi hospital or Die Volksblad.

Those journalists who checked with Cape Times (and not all of them did even this much) were told that yes, it had run a story about this. Unknown both to the reporters doing the asking and Cape Times personnel doing the answering, the version made popular by the Internet and the actual Cape Times article weren't the same. The Internet version had been greatly embellished, further garbling the already hopelessly garbled and creating by the stroke of a few electrons a suitably cold-hearted but entirely fictional spokeswoman for Pelonomi Hospital.

From there on in, it became a zoo, with publications such as New Scientist and the Sunday Telegraph claiming this as a news item. And why not indeed? Cape Times was telling them it was.

South African folklorist Arthur Goldstuck was involved with this tale almost from the moment it appeared. His fascinating "Cleaner Polishes Off Patient" FAQ is filled with an incredible depth of detail about this legend.

Although the "murdering South African floor cleaner" tale was new in 1996, its basic plot was as old as the hills, as demonstrated by this anecdote from a 1967 issue of Reader's Digest:

British engineers feared that they would have to replan the Dungesness nuclear station in Kent, after studying a special model which showed the flow of rivers and estuaries in the area. Then they discovered the reason for the puzzling variations in the model's water level. An office cleaner had been filling her bucket from it each day.

Once again, a dull-witted office cleaner is said to have upset Technology's applecart while discharging her janitorial duties. The charwoman does not recognize the "special model" serves a particular purpose — she views it merely as something she can fill her bucket from and uses it as such. Likewise, the South African floor cleaner perceives the loaded outlet in Intensive Care only as a place to plug in a needed piece of cleaning equipment — recognition that whatever is already occupying that outlet might be important eludes him.

The theme of both these stories appears in another tale collected in 1993, this one poking fun not at office cleaners, but at office workers.

Around noon every day the computer system at some office keeps freezing out. Five minutes later the system will power back up again. No one can figure out what's going checks out, hardware checks out, everything is as protected as it can be from a power surge, and besides, why would there be a power surge every day around the same time?

Finally, one bright whiz kid decides to keep an eye on the main server as the only thing that makes sense is someone has to be fooling with it. Sure enough, a little after noon one of the secretaries comes by with a kettle in hand, reaches down, unplugs the

An additional thread ties all of these stories together. It's no accident these legends are told about janitors and secretaries: they are considered lesser beings in the world of labor and are often presumed to be of lower intelligence. In each of these tales, someone from the bottom rungs of the corporate ladder who has access to key equipment but lacks so much as a basic understanding of its function and importance screws the pooch. Such tales confirm the commonly-held stereotypes of those who hold those jobs.

Given how prevalent similar tales are, there was very little excuse for the journalistic outpouring the South African floor cleaner story provoked in 1996. (One need not hear a joke told the same way each time to recognize it as the same joke, after all.) This mess proved so very conclusively that even newspapermen fall victim to 'I read it in the paper, so it must be true."

Sightings:   This legend figures in an episode of the British police drama A Touch of Frost ("Benefit of the Doubt," original air date 2001).