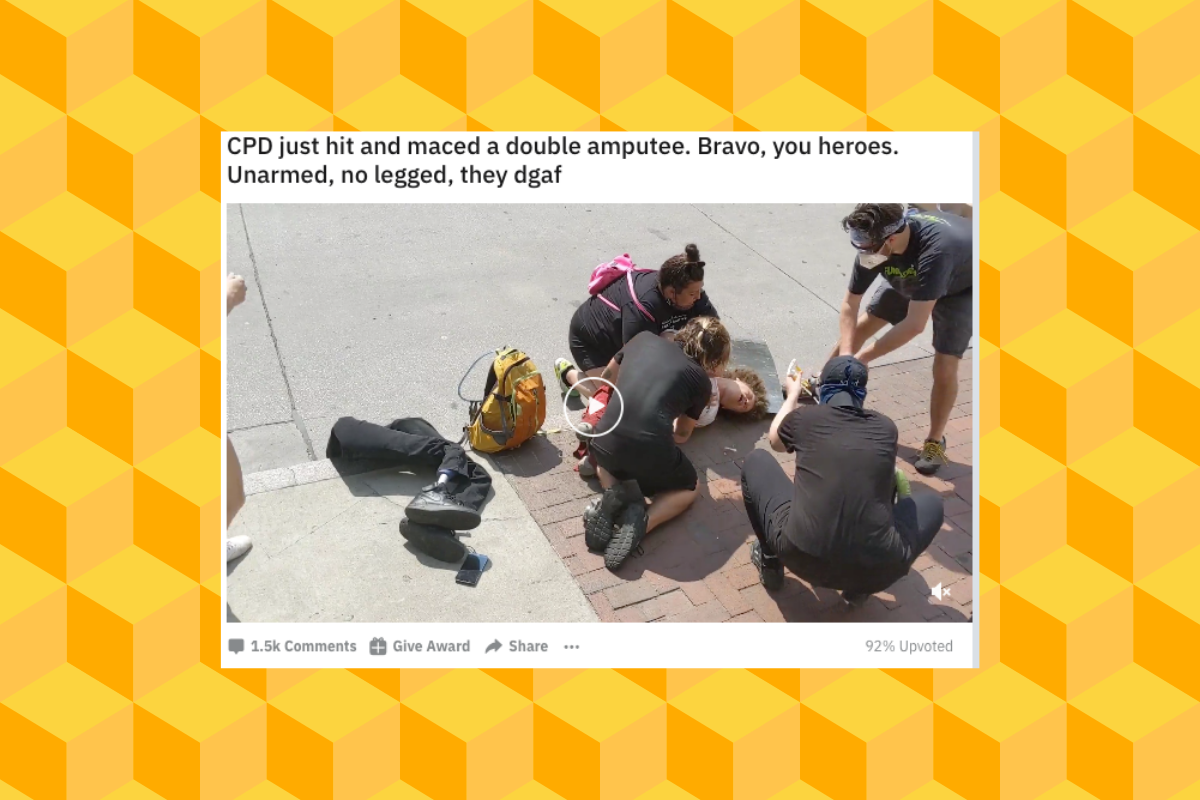 Claim:
Police pepper-sprayed a double amputee and removed his prosthetic legs during a June 21, 2020, protest against police brutality in Columbus, Ohio.
Rating:

Body camera footage confirmed protesters, including a double amputee, were pepper-sprayed by police. Police video appeared to show the amputee throwing a sign at an officer. Officers tried to arrest the man, so protesters pulled the amputee away. Video shot by a protester, reportedly after the police encounter, showed the amputee lying on the ground without his prosthetic legs as others washed his eyes.

However, police did not appear to pull the amputee’s legs off when they first tried to arrest him. Rather, footage showed protesters dragging the amputee away from police while appearing to grab his legs.

Footage released by police did not address what happened after the amputee was pulled away by protesters, or if further encounters with the police took place. The amputee’s identity remains unknown. Eyewitnesses claimed a police officer grabbed the protester by his ankles, and the prosthetics came loose. A police spokesman denied this, adding the officers likely did not know the man protesting was a double amputee.

Protests against police brutality and racism spread across the U.S. after the police-custody death of a Black man, George Floyd, in Minneapolis in May 2020. At one such protest on June 21, 2020, an encounter between police and an amputee demonstrator in Columbus, Ohio, made the news for its graphic — and conflicting — accounts of events.

Videos, images, and social media accounts claimed that the police pepper-sprayed an amputee protester and removed his prosthetic legs. We received many reader queries, and looked into this by addressing events of that day in the order in which they may have occurred. While we learned that officers did pepper-spray the demonstrator, it is unclear if they or someone else removed his prosthetics, either intentionally or unintentionally.

The man in question — later shown to be the amputee — wore a white T-shirt and black pants. Police footage showed him throwing water bottles at the police, and what looked like a plywood sign and/or shield at an officer, who was struck in the area of his head but was not seriously injured.

After this, another officer attempted to arrest the man. According to both body camera footage and videos taken by protesters, the police used pepper spray liberally. The officer sprayed in the amputee’s direction as well as on protesters who were trying to stop the arrest.

At least one image on Twitter showed the man’s prosthetic leg as he fell while an officer pepper-sprayed him and others. The above events start 1 minute and 49 seconds into this video released by the Columbus Police Department:

Police Sgt. James Fuqua can be heard explaining the events around the 4-minute mark in another video at a press conference, where he admitted that the arresting officer used pepper spray.

Then things began to get murky. The police officer, in his initial attempt to arrest the man, tackled him to the ground, grabbed his T-shirt, and dragged him. Police footage showed individuals who appeared to be protesters pulling the man away from the police by grabbing his legs, while others formed a barricade to stop the police from pursuing them. Police footage ended there, and Fuqua maintains that the officer did not pursue them, but the man appeared to return to the melee around 15 minutes later, shirtless and with his hair pulled back.

Fuqua denied that the police removed the prosthetic legs, saying that the officers were likely not aware that he was an amputee. So far, no video has emerged showing their removal.

But protesters claimed a different version of events. Eyewitnesses said they saw police officers grab the man by the ankles, and when his prosthetics came loose, the officers tried to take them. An eyewitness told Snopes that he saw the amputee "get knocked down and maced," and then lost sight of him. He did not see the moment the man's prosthetics came off, but did spot him "running away on his hands and hips." A couple seconds later he saw "two or three protesters break away from the [scuffle] with [the man's] legs and follow him."

This widely shared Reddit video of the protester lying on the ground with his prosthetic legs separated from his torso may have occurred after these events.

It is possible that the events these protesters described took place after the events shown in police footage, but we could not confirm that. We reached out to Columbus Police Department officials and asked them to shed light on what occurred after the officer first tackled and attempted to arrest the man. A representative told us that they "don't have footage of [the amputee] from the time of the incident until 20 minutes later when he is seen walking back into the protests."

We reached out to other protesters who were present at the rally and will update this article as more information becomes available. The man remains unidentified.

In sum, we know that the demonstrator in question was pepper-sprayed, but accounts conflict on whether police removed his prosthetic legs. Available footage is not sufficient to tell the entire story, therefore we rate this claim a "Mixture."