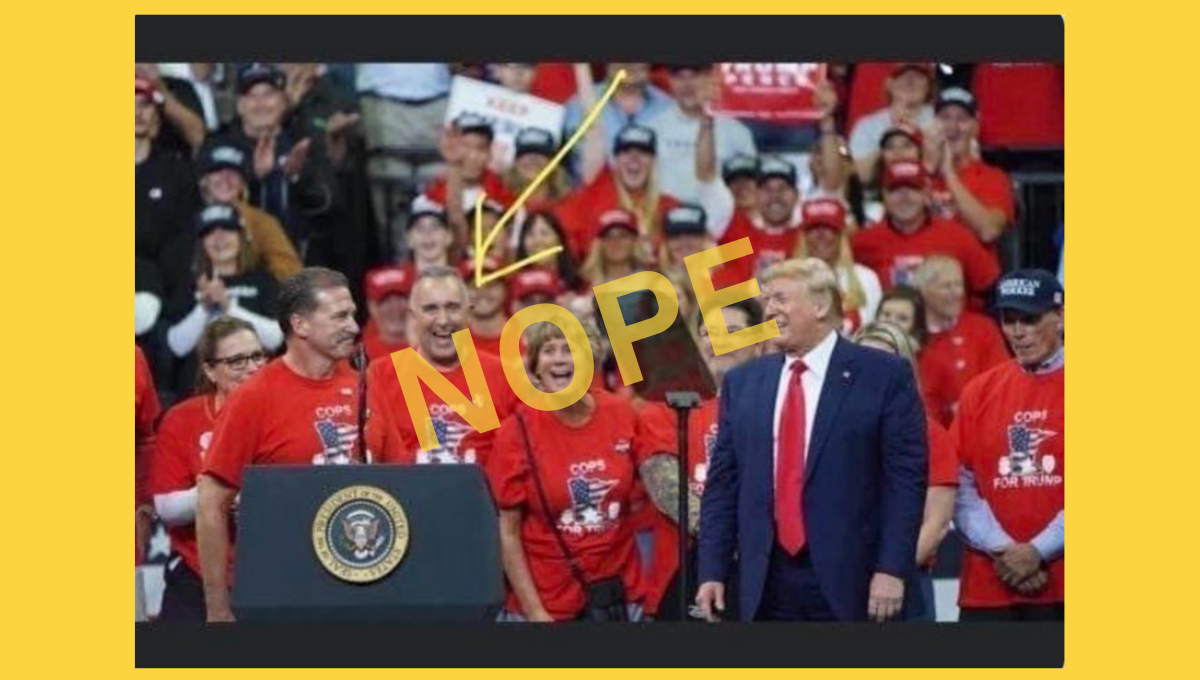 Claim:
Derek Chauvin, whom news reports identified as the cop who kneeled on the neck of George Floyd before he died, was honored for his service by U.S. President Donald Trump at a 2019 rally.
Rating:

On May 25, 2020, a video surfaced online showing a white Minneapolis police officer kneeling on the neck of a black man, George Floyd, who pleaded he couldn't breathe and who later died. Two days later, social media users claimed the officer ⁠— whom news reports had identified as Derek Chauvin ⁠— had shared a stage with U.S. President Donald Trump at a Minneapolis rally in October 2019, where the president supposedly praised Chauvin for his service. The claim — which spread online simultaneously with a photograph that users believed to show Chauvin wearing a "Make Whites Great Again" hat (here's our fact check of that claim) — spurred Americans' outrage over what they described as the senseless killing of Floyd by police. One person said on Twitter in reference to Chauvin's alleged support for Trump:

... I keep telling folks, this is what’s at stake in 2020, these are the people who the President gives a wink and a nod to when it comes to murdering black people

Multiple sources told the Star Tribune newspaper that Chauvin, 44, was the officer seen in the viral video kneeling on and pinning down Floyd before his death at a local hospital. Four officers involved in the case (including Chauvin) were fired from the city's police department on May 26, and the FBI was investigating under what circumstances, exactly, Floyd died.

The photos in the above-mentioned claim are indeed from a Trump rally at the Target Center in downtown Minneapolis on Oct. 10, 2019. But they do not show Chauvin.

Here's what happened at the rally: Led by Lt. Bob Kroll, the head of the Minneapolis police union, a group of about a dozen people wearing red "Cops for Trump" T-shirts shared the stage with the president for about three minutes during the hours-long event. Kroll addressed the crowd, thanking Trump for his support for law enforcement, and each member of the group shook hands with the president, with some of them giving him a hug.

"I came right here to Minnesota, and I pledged to address this really important issue, and it’s the issue of law enforcement," Trump told the crowd. "The respect that we have for law enforcement is unbound."

Among the people who hugged Trump was a man who at one point held a sign that read "LAW & ORDER VOTE TRUMP" above his head on stage with a big smile. He was the person at the center of the May 2020 online buzz.

In a phone interview with Snopes early May 27, 2020, Sgt. John Elder, a spokesman for the Minneapolis Police Department, essentially debunked the assertion, while emphasizing that whoever was photographed at the rally was not on duty and, therefore, not covered by parameters on which the department would comment.

Asked explicitly if the man photographed on stage with Trump at the Minneapolis rally is Chauvin, Elder said:

Later that day, journalists with TV station FOX9 contacted Kroll, the leader of the "Cops for Trump" group at the rally, who also said the officer in question was not Chauvin. Then, on May 28, 2020, Kroll went further with his comments and identified the man in question as Bloomington Police Federation President Mike Gallagher.

“Can you put a stop to the false narrative please?” Kroll told the AP. “None of the officers in the incident were near the Trump rally.”

In sum, given the differences in appearance between the Minneapolis police officer shown in the video kneeling on Floyd and the person on stage with Trump, the Minneapolis Police Department's spokesman's belief that it was not Chauvin photographed front and center at the rally, and Kroll's comments to journalists, we rate this claim "False."

Mannix, Andy.   “What we know about Derek Chauvin and Tou Thao, two of the officers caught on tape in the death of George Floyd”.   Star Tribune.   26 May 2020.

FOX9.   "Photo of officer on stage at Minneapolis Trump rally not officer involved in George Floyd's death".    27 May 2020.

Updated [May 28, 2020]: This report was updated to include additional comments from Kroll in which he named the man in the photo at the Trump rally.