Did Police Officer Hold Rioter's Hand at US Capitol?

A video of a law enforcement officer escorting a woman down stairs during a riot at the U.S. Capitol drew comparisons to the treatment of Black Lives Matter protesters. 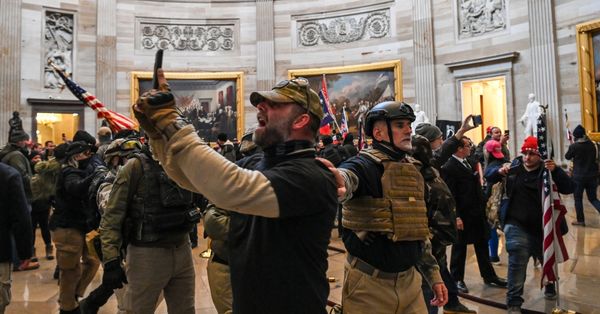 Claim:
A video shows a law enforcement officer holding the hand of a woman and escorting her down stairs during a pro-Trump riot at the U.S. Capitol on Jan. 6, 2021.
Rating:

On Jan. 6, 2021, violent pro-Trump rioters descended on the U.S. Capitol, breaking into the building, committing acts of vandalism, and planting bombs that were diffused by law enforcement. Four people died, including Air Force veteran Ashli Babbitt, who was shot by police as she was lifted up by other rioters to enter through a shattered window.

Throughout the chaotic day, many observers noted that rioters breaking into and looting the Capitol were allowed to proceed largely unfettered by law enforcement. Some posted videos showing a riot-gear-clad officer holding the hand of a person wearing a tan coat and Trump hat and escorting her down a flight of stairs.

For example, a video of the incident was tweeted with commentary by comedian Leslie Jones:

The video tweeted was real, and the same scene was captured by other news media outlets such as Atlanta, Georgia-based station WXIA-TV. The woman in the tan coat and Trump hat being escorted down the stairs can be seen from farther away in the right-center of the screen:

It's unclear why the woman was being escorted down the steps, but the video is authentic. It also prompted comparisons to how civil rights demonstrators in the spring and summer of 2020 were treated by law enforcement during massive Black Lives Matter protests all over the country after the police killings of Black Americans like George Floyd and Breonna Taylor.

U.S. President-elect Joe Biden addressed the inequity in these police tactics, stating, "No one can tell me that if it had been a group of Black Lives Matter protesting yesterday they wouldn’t have been treated very, very differently than the mob of thugs that stormed the Capitol. We all know that’s true, and it is unacceptable. Totally unacceptable. The American people saw it in plain view, and I hope it sensitized them to what we have to do."