A tabloid reported that police in the UK were banning England football jerseys from pubs and clubs, but the rumor is several years old and unsupported. 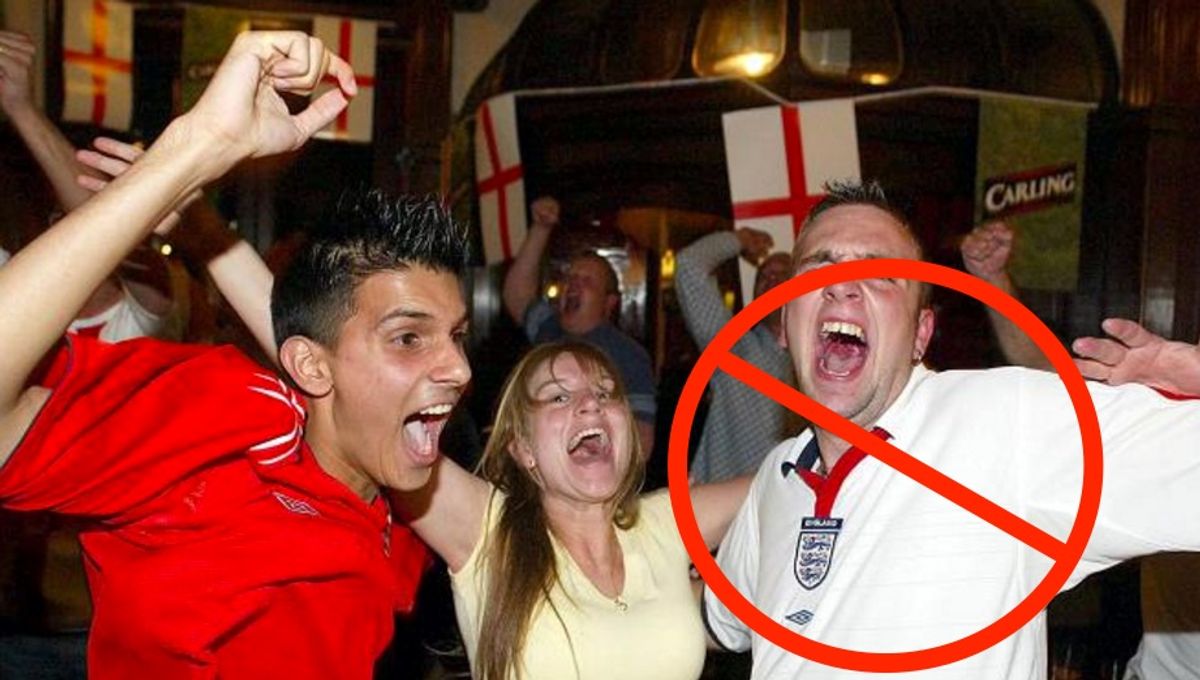 Claim:
Police in the UK are going to pubs and clubs to ban England jerseys because they're offensive to immigrants.
Rating:

On 18 May 2016, a Facebook user published a text-based status update holding that police in the UK were visiting pubs and clubs to enforce a ban on patrons' wearing England football jerseys:

POLICE ARE GOING AROUND PUBS AND CLUBS SAYING THAT WE CANT WEAR OUR ENGLAND TOPS 4 THE FOOTIE & GOTTA TAKE THE FLAGS DOWN AS IT IS UPSETTING THE PEOPLE THAT DONT COME FROM HERE !! NOW IM NOT RACIST , BUT THIS IS TAKING THE PISS! THIS IS OUR COUNTRY AND WE NEED 2 MAKE A STAND IF YOU/THEY DONT LIKE IT GO AWAY! WOULD YOU REMOVE UR TURBAN & BURKHA BECAUSE IT UPSETS ME, IF YOU AGREE POST THIS AS YOUR STATUS

It didn't take long to find examples of the very same claim having been made six years earlier::

Facebook wasn't the only medium in which similar claims were aired. In 2010 an online forum user similarly queried other users as to why police were purportedly targeting pubgoers wearing football jerseys:

Why should the police and pub landlords ban England flags, shirts etc. just in case it offends others. What is your opinion? Are you offended by this?

I heard today that the police are going around pubs and clubs saying that we cant wear our England tops for the football and we have to take the flags down as its upsetting immigrants that don't come from here! Now I'm not racist, but this is going too far! Would you remove your turban and burkha because it upsets me. We respect other cultures and other people when abroad why can't they respect us. If they find eEgland football shirts offensive and they know England are playing don't go to the pub stay at home. Let the rest of us enjoy!!!!

The spring 2010 emergence of the rumor appeared to be connected to a British tabloid article published on 2 April 2010. That speculative item not only didn't report any such ban, it merely surmised that (on the advice of police) pub owners in one part of London might choose to impose a dress code temporarily banning English football jerseys from their premises to head off problems with hyped-up football fans if England should lose a World Cup match:

Killjoy cops have urged landlords to bar anyone wearing a Three Lions top.

They want to avoid a repeat of violence which has marred previous events, particularly if England lose. The advice comes in a letter from the Metropolitan Police to pubs in Croydon, South London.

Pubs are not obliged to follow the advice, but it warns: “Police will not hesitate to use powers under the Licensing Act should we find you are not actively supporting the prevention of crime.”

A significant aspect of the purported police letter to pub owners that was elided from the rumor was that it advised imposing a temporary dress code of "no football shirts," not a restriction on England football shirts only.

Since the rumor began circulating in 2010, no subsequent reports have emerged of police in England confiscating football jerseys or raiding pubs to chase out patrons sporting them.