The details of a shelter's Pokemon Go dogwalking program were exaggerated for a heartstring-tugging viral Facebook post. 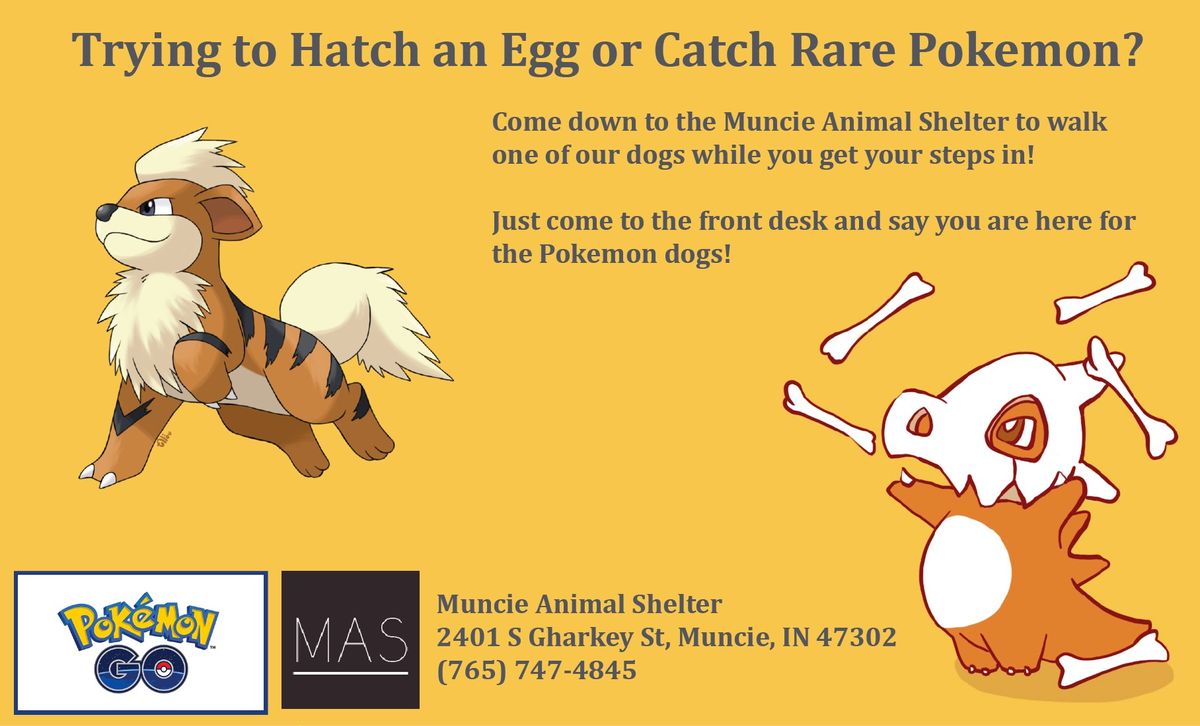 Claim:
A shelter rented dogs for embarrassed adult Pokemon Go players and raked in tons of cash before all their dogs were swiftly adopted.
Rating:

The shelter didn't charge players $5 per hour per dog to "rent" dogs for walking, they weren't rapidly cleared of dogs through adoption, nor did they make megabucks off a program designed to harness a gaming phenomenon to get shelter dogs some time outside.

On 17 July 2016 Facebook user Shawn Montgomery published the above-reproduced item, reporting that an animal shelter's plan to "rent" walkable dogs to embarrassed adult Pokemon Go players proved so popular that all dogs in the facility were adopted in just days:

Montgomery's post asserted that the shelter initially planned to "rent" dogs for $5 per hour to players so they would have an "excuse" to play Pokemon Go, but they soon had a "waiting list" of people looking to walk dogs. Not long after that the shelter made so much money off the program that they waived all adoption fees as people seeking to adopt specific dogs they had spotted online flooded the shelter, and the waiting list for canines grew even longer because every single dog wound going to a good home.

A few elements of the heartwarming story seemed somewhat implausible. A line exists between visiting with and owning a pet, the latter being an undertaking most responsible adults consider strongly before deciding upon. Moreover, shelter dogs (and cats) have long graced the pages of social media and are frequently featured in highly motivating pleas involving upcoming put-down dates, and whether or not those animals get adopted based on social media shares is questionable, whereas the Pokemon Go dogs comparably have it pretty, Public use of a smartphone is also not an embarrassing activity in and of itself, and most onlookers wouldn't be aware that any single individual employing a phone in public was playing Pokemon Go rather than using Tinder or perusing Facebook.

Not long after the rumor began circulating, an individual posted a screen shot to Montgomery's wall purportedly identifying the shelter in question as one in Muncie, Indiana: [Peckinpaugh] quickly turned around a simple graphic that set social media ablaze with its offer to Pokémon Go trainers to walk an adoptable dog while hunting their next big catch. The Internet couldn't resist the trap that is cute dogs and Pokémon as the picture rose to the front page of Reddit by the end of the night Tuesday with about 6,000 "upvotes" and more than 1,000 comments.

Peckinpaugh said the shelter's Facebook post, which has been shared 26,000 times, reached more than 1.5 million people. The equally brilliant and adorable marketing strategy first caught the attention of Time Magazinebut later made Buzzfeed — where it racked up 66,000-plus likes on Facebook — and The Huffington Post.

The shelter's original post was not as much of a "joke" as Montgomery's made it out to be: the shelter didn't charge $5 per hour per dog (and thus couldn't have raised enough from that invisible charge to waive adoption fees), nor did the invitation graphic suggest adults utilizing the program were primarily those "embarrassed" to play Pokemon Go without a dog in tow:

Participants were simply invited to go to the desk and ask for one of the "Pokemon dogs," and there was no apparent time limit to enforce the charging of hourly rates. As for the somewhat conflicting claim that the shelter was soon cleared of all dogs and had to "borrow" dogs from another shelter, that didn't appear to be accurate. On 21 July 2016, the shelter posted about an upcoming adoption event during which Pokemon dogs would not be available for walking:

We contacted Peckinpaugh at the Muncie Animal Shelter to determine whether anything other than the assertion the facility had a Pokemon Go dogwalking program was true, and he confirmed that there was never a charge to walk the dogs (and fretted that the claim might discourage those interested in doing so), that no money had been raised by the program, and that while six dogs had been adopted, many more still needed homes.