Did a Plumber Find a Giant Snake While Investigating a Clog?

One seemingly oversized serpent seems to be making its way around the U.S. for identical poses. 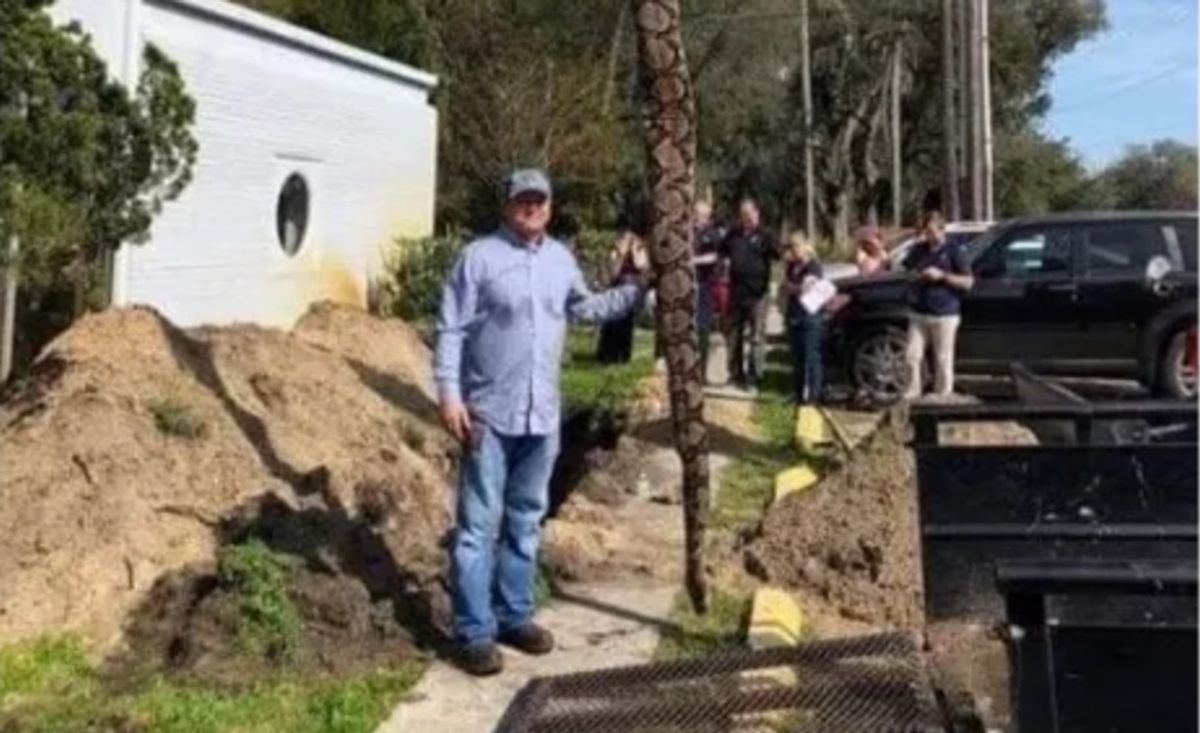 Claim:
A photograph shows a giant snake found by a plumber investigating a clogged pipe.
Rating:

In mid-February 2019, an image supposedly showing an enormous snake being held up by a crane started to circulate on social media. Attached to photograph was the claim that the super-sized serpent had been found by a plumber who was investigating a clog: Ric Bauer told us via Facebook that he didn't have any first-hand knowledge of the incident behind the picture and that he was merely re-sharing an image he had encountered on another Facebook page, "Key West in Your Face." The Key West page made no mention of a plumber or a clog, however, and Bauer told us that he had reposted the image with his own caption: "Florida Plumber Finds Clog."

In other words, the "plumber" portion of this claim did not originate with a news report or first-hand knowledge, but apparently as a joke.

We have not been able to track down the exact origins of this photograph, but we have found a number of people who shared this same picture as if the snake had been found in a variety of locations. An 11 February 2019 post on the web forum Tapatalk, for example, reported that this snake was found in Mississippi: "A place in Enterprise, Mississippi where a friend works was having serious "clogging" problems with the "outflow" of their plumbing. This morning they found this."

Other Facebook users stated that the snake was found in various Florida cities, including Plant City and Immokalee. Gabrielle Dawkins, a reporter with WBBH in Fort Myers, posted a statement she had received from the Florida Fish and Wildlife Conservation Commission declaring that they had not received any reports about this snake:

The Florida Fish and Wildlife Conservation Commission (FWC) has no evidence that a reticulated python has recently been removed from the wild in Florida. There are some inconsistencies in the photograph which appears to be photoshopped. Also, some of the FWC law enforcement pictures being used with the Facebook post are from other events not related to a snake.

The earliest iteration of this image that we could find involved yet another location. On 9 February 2019, Facebook user Sherri Blair posted this image and claimed that the snake was found in New Orleans East:

The fact that this single photograph has been attached to a multiple locations indicates that those sharing this image do not know its true origins. Furthermore, the earliest posting of this image that we encountered (February 9th) was accompanied by the simple caption "New Orleans East." It wasn't until two days later that the "Florida plumber finds a clog" caption was superfluously attached to the photograph.

It should be noted, however, that this photograph (wherever it was taken) appears to be genuine. Although Florida's FWC believes that this image might be Photoshopped, we'd argue that the picture is actually another example of forced perspective photography. While it appears that the man in blue is touching the snake, the animal is likely much closer to the camera than the man is, making the reptile appear much larger than its true size. The pages of Snopes.com are filled with similar examples, such as images supposedly showing giant shrimp, catfish, frogs, rodents, and squirrels.